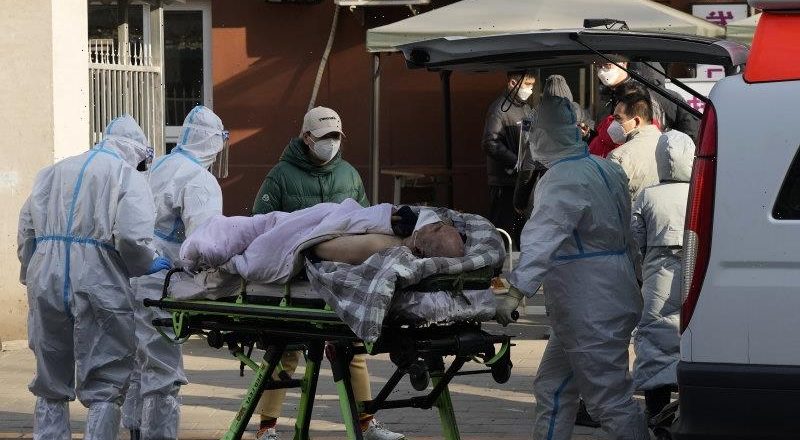 China is facing the largest coronavirus outbreak the world has ever seen but according to epidemiologists, the absence of credible and real-time data is making it extremely difficult for scientists to understand the severity of the wave.

Former World Health Organisation advisor Adrian Esterman said there remained serious gaps in the intelligence coming out of China and growing doubts over the accuracy of the information being released about daily cases, hospitalisations and deaths. 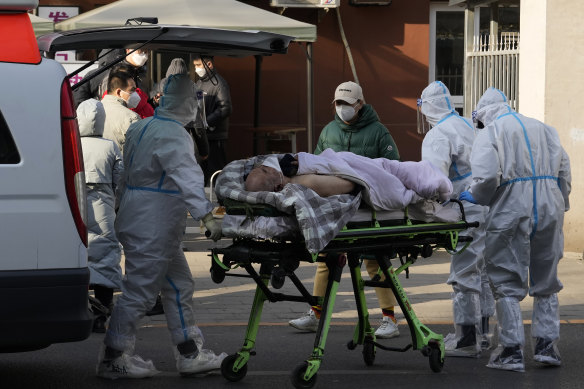 An elderly man is taken into the fever clinic at a hospital in Beijing on Friday.Credit:AP

“The answer is we don’t really know an awful lot about what’s going on… apart from reports coming out of China, which include huge queues to crematoriums and overwhelmed hospitals,” the chair of biostatistics and epidemiology at the University of South Australia said.

China’s National Health Commission recently stopped publishing daily coronavirus data. This sudden halt to the reporting of daily infections and deaths came amid an explosion in infections, and as China abandoned its zero-COVID policy, which had put hundreds of millions under lockdown and battered the world’s second-largest economy.

Complicating the problem is the fact that China does not supply data on genomic sequencing, a critical tool able to quickly detect mutations circulating during an outbreak, although Chinese researchers suspect up to one quarter of those infected have caught B17, an offshoot of Omicron, which was detected in Australia in as far back as mid-2021.

Other countries including the United States, England, France and Australia, participate in the sharing of genomic sequencing data to detect the global emergence of new variants.

“China were reporting fewer than 10 deaths a day recently, which clearly indicates very poor data,” Booy said. “A conservative estimate is that they had 100 million cases in December, but some are estimating hundreds of millions.”

Unlike Australia, China only reports those who die directly from respiratory illnesses caused by coronavirus (such as pneumonia or respiratory failure) and not deaths in patients with pre-existing illnesses. The counting method does not correspond with that used by the World Health Organisation and results in a figure far below the death toll in other comparable countries.

China wound back its coronavirus restrictions in early December, just as a winter Omicron wave hit. Scientists estimate the country will soon hit more than 10 million new cases each day and several modellers predict that a half million or more people could die.

However, Esterman warned it is unfair to single out China, when other countries across the world, including Australia, should be strengthening their surveillance.

“If you asked how many cases are there in Australia right now I couldn’t tell you,” Esterman said.

He said the United Kingdom was leading the world in its surveillance with a survey, which analyses the blood samples of thousands of people every month.

The biostatistician also noted that 40 per cent of COVID-19 cases in the United States were caused by the highly contagious Omicron sub-variant XBB.1.5, which many disease experts consider “the most concerning and notable sub-variant circulating”.

“One of the reasons why there’s so much alarm is that the US’s Centre for Disease Control have kept this very, very secret until now,” Esterman said. “Although it was first discovered in New York in October, the CDC have said nothing about it and did not put it in their figures until a week ago.“

But Booy said the sprawling consequences of China’s outbreak were far more worrying as it had four times the population of the US “and probably 40 times the incidence of disease”.

Across the world, researchers are racing to analyse information coming out of China. Scientists in Hong Kong have scoured passenger data from Beijing subway lines to determine the potential spread, while researchers in the US attempting to reverse-engineer unverified government leaks detailing case numbers from Chinese health officials. UK-based health data firm Airfinity estimates about 9000 people in China are probably dying each day from coronavirus (nearly double its estimate from a week ago).

University of Queensland virologist Associate Professor Kirsty Short said the outbreak in China highlighted the urgent need for the establishment of a global surveillance network able to monitor coronavirus, similar to influenza.

“We need to understand what sub variants are circulating and if they are causing more severe disease, so if we need to, we can update the vaccines quickly,” she said.

Cut through the noise of federal politics with news, views and expert analysis from Jacqueline Maley. Subscribers can sign up to our weekly Inside Politics newsletter here.