London: Prince Harry says he found inner peace while mustering cattle in rural Queensland as he escaped his life in fishbowl Britain and battled to overcome his issues with substance abuse as a teenager.

The Duke of Sussex has revealed the highs and lows in his long relationship with the Commonwealth nation in his controversial memoir, Spare, which is published in Australia from today.

It has already become fastest-selling nonfiction book ever, recording figures of 400,000 on its first day on sale in the UK. 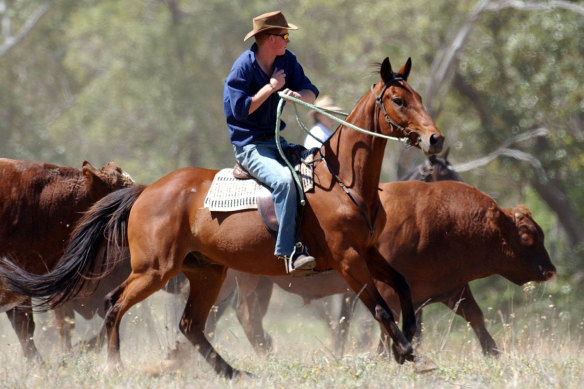 Britain’s Prince Harry musters cattle on a horse called Guardsman on the outback property of Tooloombilla in central Queensland.Credit:AP

Having regularly smoked cannabis and drank alcohol as a teenager and visited rehabilitation clinics, the then 19-year-old Harry was sent to toil for two months on Tooloombilla Station in southern central Queensland between leaving Eton College and joining the British Army.

The 16,000 hectare cattle property 150km northwest of Roma was owned by Annie and Noel Hill, who were friends of his late mother, Diana. Hill’s father was a millionaire polo star who once coached Harry’s father.

It was widely reported around that time that Charles confronted Harry, who had confessed to “experimenting” with weed on several occasions at his father’s Highgrove home.

The memoir, which has attracted international headlines for the past week, revealed that Charles had discouraged his younger son from attending university after leaving school and instead suggested he take a gap year.

“It was no secret, he tactfully told me, that I was not ‘the intellectual of the family’,′ he writes. “He didn’t mean to hurt me. Still, I shuddered.

“My family believed hard labour is the answer to everything.

“This wasn’t merely work. Being a jackaroo required stamina, but it also demanded a certain artistry. 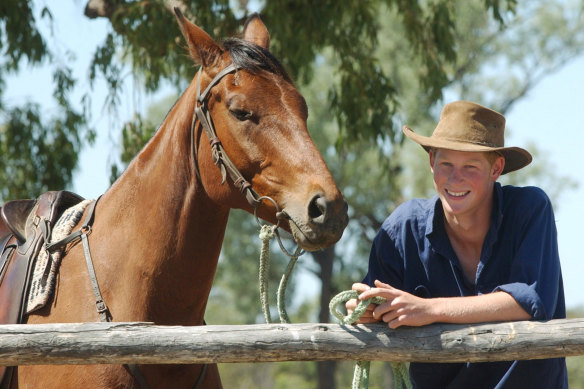 A young Prince Harry earned the nickname “Spike” after an encounter with an echidna while he was jackerooing in Australia in 2003.Credit:Greg White/Reuters

Despite planning to spend six months in Australia, Harry’s trip was cut short with the appearance of paparazzi camping out and invading the Hills family privacy only about nine weeks into his stay.

He writes that a typical working day began in the middle of the night.

“At first light we’d saddle up, gallop to the edges of the forty thousand acres (double the size of Balmoral) and begin to muster,” he says.

“That is, move the herd of cattle from here to there. We’d also search for individual cows that had strayed overnight, and drive them back into the herd.

“Or load some onto a trailer and take them to another section. I rarely knew exactly why we were moving these cows but I got the bottom line: cows need their space. I felt them.”

He was also treated as an equal, sharing the family home and asked to perform the daily chores expected of other station members.

While visiting Sydney to watch the Rugby World Cup, he posed for a photo with an echidna at Taronga Zoo, which had earned him the name “Spike” on the farm because of his stand-up red hair at the time.

Harry says he learned to appreciate the business of farming, in particular the art of raising quality cattle.

“The trick was never letting a chase last too long. Long chases wore out the cow, reduced its body fat, slashed its market value. Fat was money, and there was no margin for error with Aussie cattle, which had so little fat to begin with,” he writes.

He also explains to readers the lingo involved with life on the land, with a steer a young neutered male cattle primarily raised for beef and a weaner was a calf newly split from its mother.
A smoko was a cigarette break. Tucker was food.

“I spent a lot of late 2003 sitting high in the saddle, watching a weaner while sucking a smoko and dreaming of my next tucker,” he writes.

But he drew the line at castration. 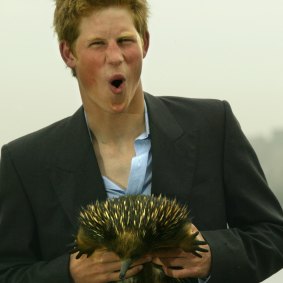 Prince Harry with the echidna which spawned his nickname, Spike.Credit:Steven Siewert

“The only job that I did not take care of, the only difficult task that I avoided, was cutting their testicles,” he writes.

“Every time George (his colleague) pulled out that shiny long blade I would throw up my hands. No way, man, I can’t. You do it.”

While his bodyguards stayed in an outlying house on the property, there was increased media interest on his whereabouts and police arrested several intruders.

“Paps were like ants. There was never just one,” he writes.

“The police were pleased with themselves. But I was glum. I knew what was sure enough, the very next day, two more crept onto the farm. Time to go.”

“I thanked the Hills family for nine of the best weeks of my life and flew home, arriving just before Christmas.”

While Australia delivered precious memories, it was also an Australian magazine, New Idea, which cut short his first deployment to Afghanistan by breaking a worldwide media embargo in February 2008.

That original report in the magazine was followed up in the United States by news website the Drudge Report.

“An Australian magazine had picked up the story and told everyone that I was in Afghanistan,” he writes.

“The magazine was inconsequential, so at first no one had noticed the story, until some [journalist] in the US read the article, posted it on his crappy website, and the trackers got hold of it.”

Harry writes that his army superiors apologised that he would have to be evacuated and he almost begged to stay but knew he could not for the safety of those around him.

New Idea later issued an apology for breaching the media blackout over Harry’s presence in Afghanistan.

“We regret this serious lapse of judgment,” its publisher said. “We sincerely apologise to all our readers, to the servicemen whose lives are at constant risk while serving at home and abroad and to their families and loved ones.”