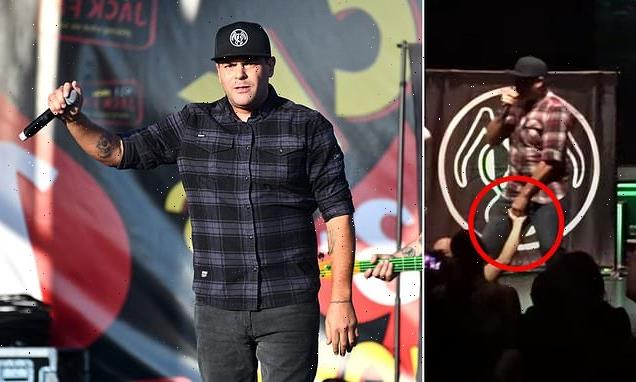 The lead singer of rock band Alien Ant Farm has been charged with battery after bizarrely pulling a male fan’s hand into his crotch during a concert in Fort Lauderdale, Florida, DailyMail.com can reveal.

Dryden Mitchell, frontman for the one-time chart-topping group best known for its 2001 remake of Michael Jackson’s ‘Smooth Criminal,’ was performing the hit cover at the upscale Broward Center for the Performing Arts on October 29 when he inexplicably clenched a fan’s outreached hand and placed it on his groin.

In a YouTube video of the performance that is now the key piece of evidence against Mitchell, the fan can be seen quickly yanking his hand from the lead singer’s grasp. 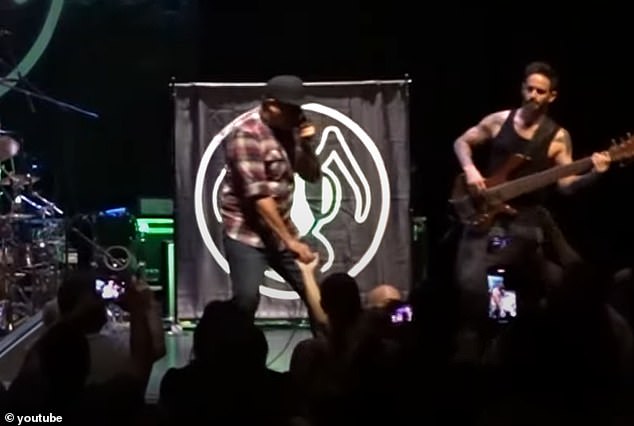 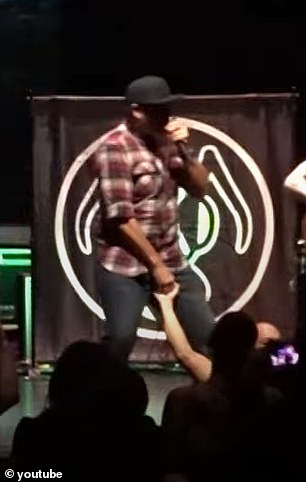 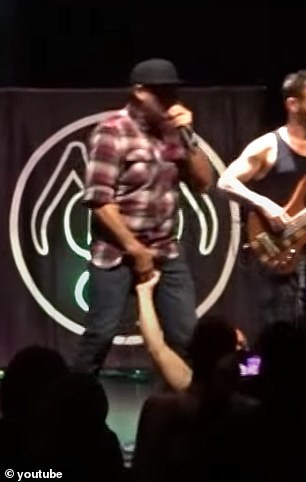 The October 29 incident was captured in a video posted on YouTube that is now the key piece of evidence against Mitchell. The fan can be seen in the crowd raising his hand in the air when Mitchell places it on his groin. The man then quickly yanks his hand from his grasp

The lightning-quick encounter went unnoticed at the show and moments later the band’s set concluded.

But a little more than two weeks later, on November 15, the fan, a 45-year-old Miami man, went to the Fort Lauderdale Police Department to complain that Mitchell had assaulted him.

Reached by phone, the fan told DailyMail.com he had no idea what prompted Mitchell to do what he did and said he was saving further comment for a later time.

‘I do want to tell my story but I do have to listen to my civil lawyers,’ said the man, whose name was not made public in a police report of the incident obtained by DailyMail.com.

‘I’ll be more than happy to speak later. I do want the story out there because what happened was not right.’

Parts of his story are recounted in the police report, released after the Broward State Attorney’s Office filed a first-degree misdemeanor charge – punishable by up to a year in jail – against Mitchell on December 30.

‘[The fan] said he had his fist in the air and was trying to get a picture with Mitchell,’ police wrote. 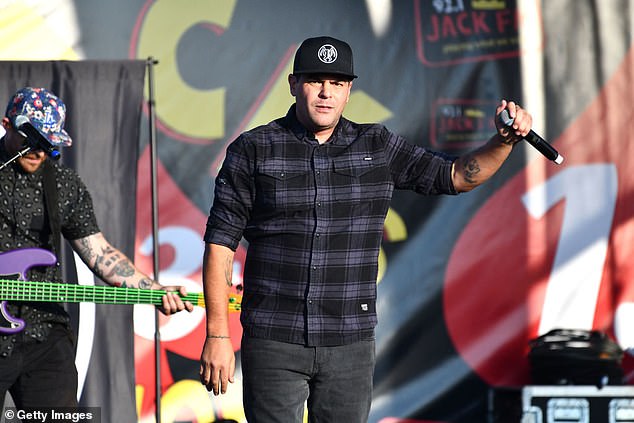 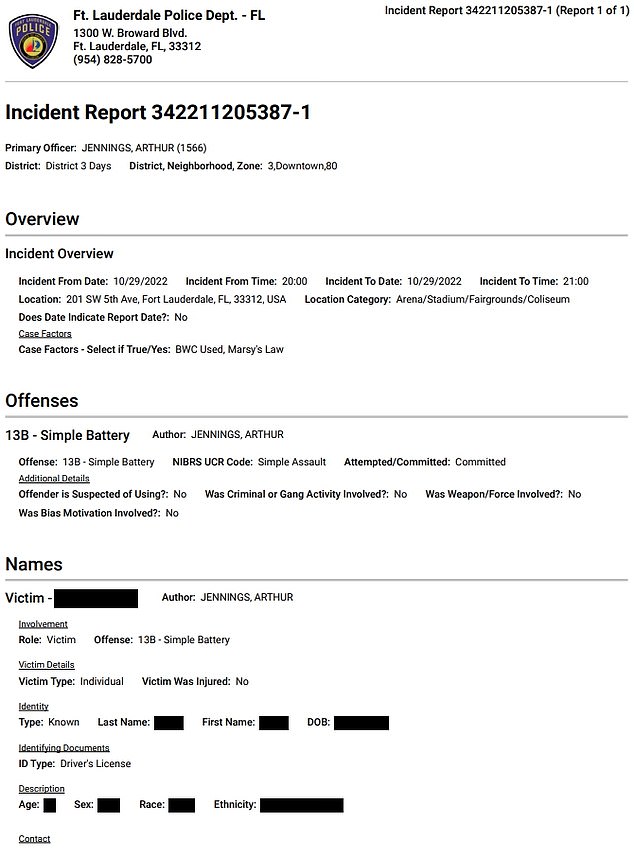 A copy of the Fort Lauderdale Police incident report obtained by DailyMail.com does not name the victim under Marsy’s Law 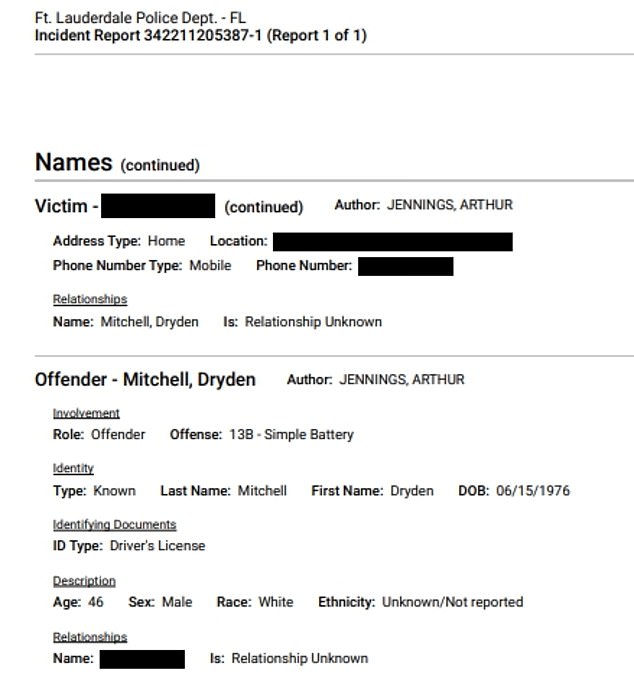 Mitchell has yet to be booked for the battery charge, which was filed in absentia

‘[He] advised that Mitchell grabbed his fist while it was in the air and pulled the fist into his private area (genital area) against his pants. [He] stated he immediately pulled his hand away at that point.’

The fan told police that he decided to report the crime well after the fact because it ‘was not sitting well with him.’

‘[He] did not feel this was proper behavior to do in front of all the concertgoers and also stated there were kids in the crowd as well,’ police wrote. ‘[The fan] advised he wanted to report the incident to police.’

Attempts to contact Mitchell, who lives in Riverside, California, by phone and via his booking agency, New York-based TKO, were unsuccessful.

A detailed message requesting comment was left with an agency representative and had gone unreturned.

This isn’t the first incident involving the band and an alleged battery of a fan.

While Alien Ant Farm was touring England in 2016, the foursome’s guitarist, Terry Corso, assaulted a fan at a show in the north west city of. Chester after the fan threw liquid at him.

Corso said he assumed the liquid was urine because Mitchell had been doused with urine at a show in Preston just two days before.

The guitarist jumped into the crowd and punched the fan. The liquid was not in fact urine and Corso was ultimately hit with fines and a 12-month conditional discharge –  similar to a year’s probation in the U.S.

Mitchell, a married father of two, is a founding member of Alien Ant Farm, which was formed in Riverside in 1996. 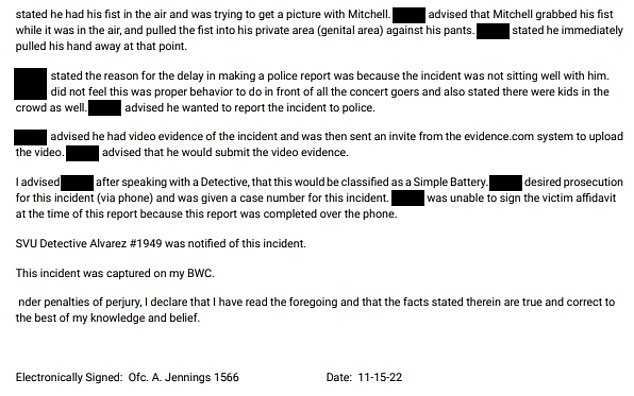 According to the report narrative, the man told police he was trying to get a picture with Mitchell when the singer puled his fist into his genital area 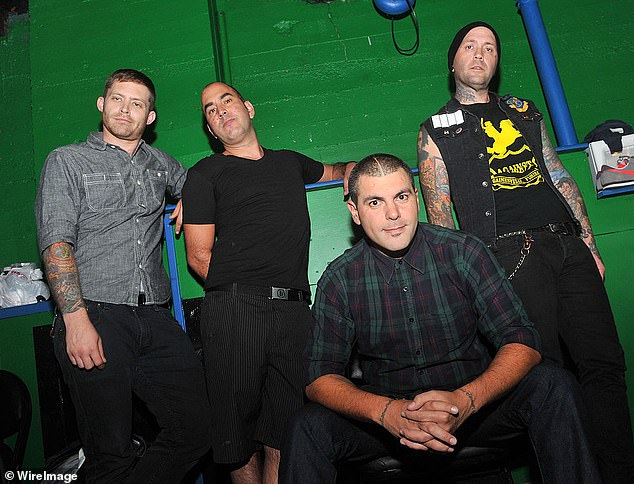 The rock band, consisting of Tim Peugh, Mike Cosgrove, Dryden Mitchell and Terry Corso, was formed in Riverside, California in 1996

The band’s first studio effort was named Best Independent Album at the LA Music Awards in 1999, but it was its second album, ANThology, that brought major success.

The ‘Smooth Criminal’ track went to No. 1 on the Modern Rock Tracks chart, No. 1 in Australia, and No. 3 in the UK.

The song was featured in the film American Pie 2 (in a memorable scene where Jason Biggs’s character superglues his hand to his crotch) and has since racked up 267 million views on YouTube.

The song unexpectedly went viral again last summer, prompting the LA Times to publish a Q and A with Mitchell in June.

‘That was some big s**t when it was going down,’ Mitchell told the Times of his early stardom.

‘We were just rip-roaring around the world, flying everywhere and doing what we love. We were so cocky. I didn’t have thoughts of my 46-year-old [self] back then. I’m a dad now!’

Another song on the album, ‘Movies,’ became the second-most popular song by the band, cracking the Top 5 in the UK and has since reached 22 million YouTube views.

While on tour in Spain in 2002 the band was involved in a bus crash in which the driver was killed and the band members were injured.

Mitchell suffered the worst of the group’s injuries, breaking a vertebrae in his back. He was air-lifted to a London hospital and largely recovered after surgery in Los Angeles.

Alien Ant Farm has since released three more albums, the most recent one in 2015, but none have approached the popularity of ANThology.

In 2020, the band released a Covid-era remake of Wham’s ‘Everything She Wants’ that has mustered a half million views on YouTube.

Mitchell has yet to be booked for the battery charge, which was filed in absentia.

Defendants in such cases are routinely issued a notice to appear in court, but that hasn’t occurred yet in this case and the court date has yet to be set.