Aaron Rodgers throws 3 INTs in loss to Lions, 2 in the end zone 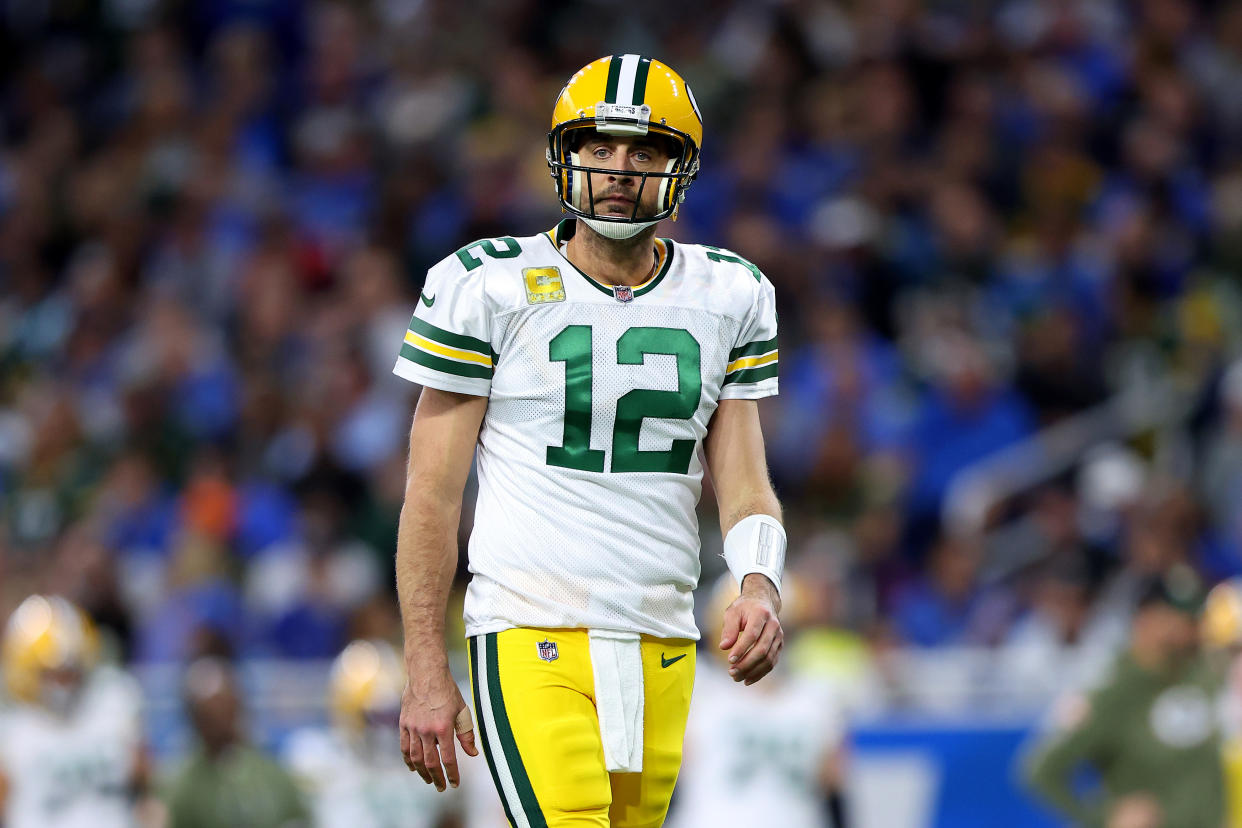 An already ugly season got worse on Sunday for Aaron Rodgers and the Green Bay Packers.

The Packers quarterback threw an interception into the end zone to end Green Bay's first possession against the Detroit Lions. On Green Bay's second possession, he did it again. By the end of the game he'd thrown three interceptions in a 15-9 loss that dropped the Packers to 3-6.

The Packers took possession for the first time deep in their own territory after the Lions failed to convert on fourth down at Green Bay's 7-yard line. They then drove 88 yards to Detroit's 5-yard line in 12 plays, setting up a first-and-goal.

There, the Packers opted for a play-action pass. Rodgers' attempt to Allen Lazard was tipped at the line of scrimmage by linebacker Derrick Barnes and popped up into the air. Rookie safety Kerby Joseph secured the loose ball in the end zone for the first interception of his career.

After forcing a three-and-out on the ensuing possession, the Packers took over near midfield and found themselves at first-and-goal from the 1-yard line after driving 47 yards. Two failed runs and an incomplete pass left the Packers facing fourth-and-goal in a scoreless game. The Packers opted to go for a touchdown. It did not work out.

Rodgers faked a handoff out of a jumbo set, rolled to his right, then floated a pass across the field to his left targeting left tackle David Bakhtiari, who had reported as an eligible receiver. Bakhtiari never had a chance.

The pass was short, and rookie Aidan Hutchinson picked it off in the end zone for the first interception of his career and another Lions touchback.

First career pick for the first round pick❗️#GBvsDET | 📺 FOX pic.twitter.com/8lA5YloRIj

The interceptions ensured that the game remained in a scoreless tie and marked the first time in Rodgers' career that he'd thrown two red-zone interceptions in the same game.

Things didn't go much better in the second half, where Green Bay's second possession ended in yet another Rodgers pick in Lions territory. This one wasn't in the end zone, but it was close. On second-and-10 from Detroit's 23-yard line, Rodgers looked deep over the middle for tight end Robert Tonyan at the goal line. Instead he found Joseph again, who intercepted Rodgers for a second time.

THE ROOKIE. Kerby Joseph has his second INT today! @JKERB25

He finished the day completing 23 of 43 attempts for 291 yards with a touchdown and the three interceptions. His turnovers doomed the Packers in a one-possession game. Making matters worse, he lost receivers Romeo Doubs (ankle) and Christian Watson (concussion evaluaton) to injury.

Rodgers entered Sunday posting career lows in passing yards per game (225) and per attempt (6.6). He exits with another loss in a turnover-plagued effort that threatens to doom Green Bay's season.