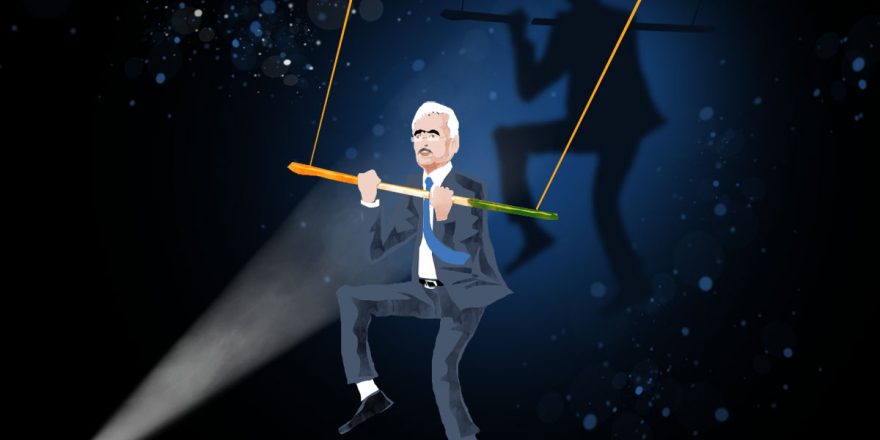 RBI Governor Is A Trapeze Artist

Shaktikanta Das is a master of the finest balancing act who listens to all but takes his own decisions, discovers Tamal Bandyopadhyay.

Of the eight Reserve Bank of India governors who have held office since the economic liberalisation of 1991, Bimal Jalan had the longest stint and S Venkitaramanan the shortest.

Shaktikanta Das will overtake Jalan when he completes his second term in December 2024.

In fact, after Rama Rau, Das will be the second governor in the RBI’s history to be at the helm for at least six years.

His fifth year started this month.

In the post-liberalisation era, Das, a 1980-batch IAS officer of the Tamil Nadu cadre, has the most challenging assignment.

An economy dreaming of soaring to $5 trillion sank into ‘technical’ recession as the pandemic hit the world in 2020.

Das ratcheted the interest rate down to a historic low, flooded the system with money, and tried to tackle the unprecedented crisis with several measures, including unconventional ones.

Those with a ringside view of the 1991 balance of payment crisis could say that Venkitaramanan, not Das, had the toughest assignment. Why?

Das faced the pandemic’s challenge in an interconnected world where the Indian economy was the sixth-largest by nominal GDP and the RBI had a substantial international standing and was taken seriously.

(By September 2022, India overtook the UK to become the world’s fifth-largest economy.) And, the entire world faced the same challenge.

Venkitaramanan batted on a different pitch since the Indian economy was just a peripheral player in the early 1990s.

Incidentally, Das is the first governor after Venkitaramanan who has not studied economics.

Let’s pick four challenges that Das has faced in his four years — two he has tackled well and two from which he can’t take his eyes off as yet.

First, he has revived the relationship between the RBI and the government.

When Das took over, it had reached its nadir.

No wonder then that two successive governors before him had relatively shorter terms — Raghuram Rajan three years, and Urjit Patel a little more than two years (Patel resigned).

Das built bridges with the government by transferring record funds from the RBI reserves, following the recommendations of a committee headed by Jalan, but the amount was not as much as the government would have loved to have.

He also won the hearts of RBI insiders through the updation of the pension scheme — a contentious issue for decades.

No wonder former finance minister Arun Jaitley used to describe him as a ‘bureaucrat’s bureaucrat’.

Many had felt the government’s grip over the central bank would tighten when he walked into Mint Road.

A three-year extension reaffirms the government’s comfort with him, but he hasn’t given up the central bank’s independence.

Second, he has faced the crypto craze head-on even as the government’s approach was somewhat ambivalent until recently.

Raising the red flag for investors, Das went to the extent of saying such assets have no underlying value whatsoever, ‘not even a tulip’, referring to the Tulip Mania that gripped parts of Europe, especially Holland, in the 17th century, which ended in a spectacular crash.

The CBDC will not substitute cryptocurrencies since it would not be a proxy for crypto, but it will create a new narrative and convince us that the RBI can face the challenges of the digital age, chin up.

Yet another challenge before Das is to equip the central bank to tackle digital disruptions in the financial sector.

Fintechs are expanding their domain, the rules of the game are changing, and many banks look vulnerable in the new regime.

Das’s job is cut out. He needs to ensure that the RBI is equipped with the skill and expertise to play the referee in the digital game.

Otherwise, the disruptors could threaten the financial sector’s stability.

The RBI took the first step in August 2022 when it stipulated that the lending business could be carried out by only those entities regulated by it, and kept third parties out of lending and collection of loan repayments.

A month later, it spelt out the guidelines on digital lending.

Finally, the biggest challenge before Das is to bottle the inflation genie and manage the depreciation of the rupee in an orderly way.

Retail inflation surged to 7.79 per cent in April 2022, the highest since May 2014, before starting to climb down.

Till October 2022, retail inflation had been above the upper limit of the central bank’s flexible inflation target band (4 per cent +/- 2 per cent) for 10 months in a row.

Until Russia invaded Ukraine in February 2022, Das kept the RBI’s stance accommodative and wanted to continue with that as long as necessary to secure growth.

But as the global financial landscape dramatically changed since the war broke out, he could not afford to delay the unwinding.

He had informally started tightening by mopping up money through the reverse repo auctions at a higher price much earlier, but it was not enough when crude oil prices rose and high inflation was globalised.

Das took time to sense it. Even in the February 2022 policy, just after an expansionary Budget that pushed the Union government’s gross borrowing for the year to a historic high of Rs 14.3 trillion, passing on the job of pump-priming to the RBI, Das was unfazed.

The central bank’s rate-setting body left the rates unchanged then.

In quick succession, the Monetary Policy Committee (MPC) raised the policy rate four times — from 4 per cent to 6.25 per cent by December.

The first increase was announced in the first week of May, off-cycle, a month ahead of the slated MPC meeting and just 12 hours before the US Federal Reserve raised its policy rate by 50 basis points — the highest in 22 years — to tackle the worst inflation America has witnessed in four decades.

One basis point is a hundredth of a percentage point.

After the 40-basis point increase in May, in India, three increases of 50 basis points each followed in June, August, and October, and in December came a 35-bps hike.

Let’s wait to see when Das will press the pause button and reverse the cycle by cutting the policy rate.

Y V Reddy is probably the only governor who raised rates throughout his five-year term; he didn’t cut them even once.

Remember his February monetary policy statement, which quoted a famous Lata Mangeshkar song, ‘Aaj phir jeene ki tamanna hai (Today, I have the desire to live again)’ from the 1965 film Guide, written by Shailendra? To his credit, he changed his stance quickly.

Had he not done so, we would have seen Das singing the song’s next line, ‘Aaj phir marne ka irada hai (Today, I have the intention to die again)’.

He is nimble-footed and open to ideas — a trapeze artist, a master of the finest balancing act who listens to all but takes his own decisions.