Home » World News » Western tanks are heading to Ukraine, but will they be enough? 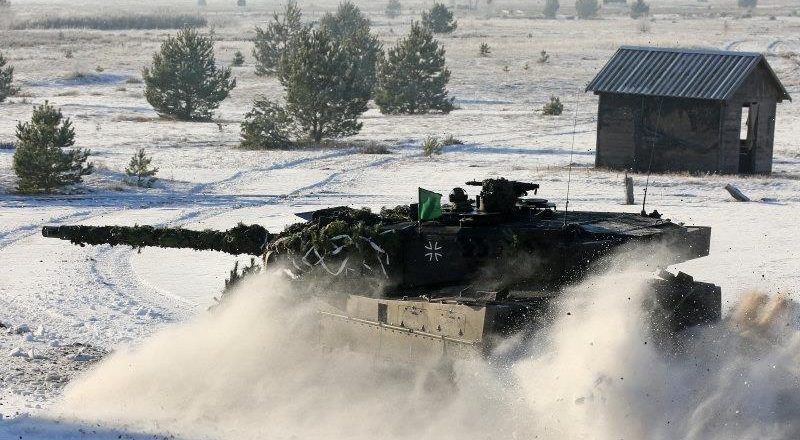 Western tanks are heading to Ukraine, but will they be enough?

The decisions by Germany and the United States to send battle tanks to Ukraine, reversing months of resistance, prompted additional pledges from across Europe and predictions of victory over Russia. But it may be months before the tanks rumble across the battlefield.

“These can help Ukraine to defend itself, win and prevail as an independent nation,” said Jens Stoltenberg, NATO’s secretary-general. “Soon to be a regular sight prowling the fields of Ukraine,” Britain’s Defence Ministry crowed in a Twitter post with a photo of a German Leopard 2 tank and a British-made Challenger 2 tank chewing up a muddy training field in Poland. 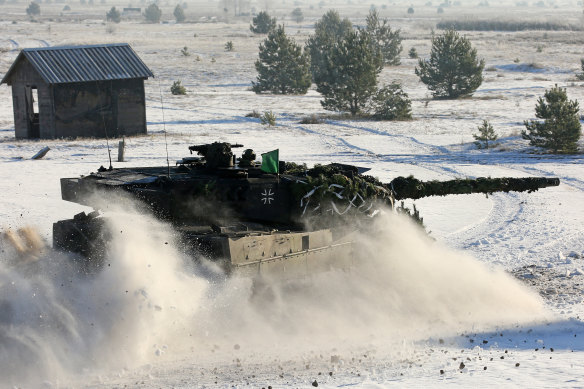 A German Bundeswehr Leopard tank drives through the snow in preparation for a Dutch-German military exercise.Credit:Getty

But not that soon. Ukrainian troops still need to be trained to use the powerful Western war machines, and moving them into the conflict zone is far from an easy task. The tanks that were promised by Berlin and Washington will not be delivered until spring or summer at the earliest — not in time to help Ukraine defend hotly contested towns and cities near Bakhmut, in the country’s east, where Russian forces have been recently advancing in a gruelling ground assault.

The more immediate payoff from the announcements may be in providing a pathway for about a dozen other European countries to donate their own German-made Leopard 2s to Ukraine — a step that would not have been taken without Berlin’s consent and a parallel promise by Washington to contribute its M1 Abrams tanks.

“Sending the Abrams appears to have been the key to unlocking the Leopards, which will probably get to Ukraine much faster,” said Sofia Besch, an expert on European defence issues at the Carnegie Endowment for International Peace in Washington.

Here is a look at what happens next. 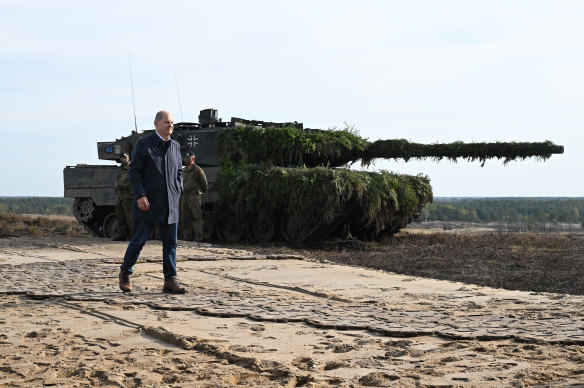 Which countries are donating Western tanks, and how many?

The biggest donation is coming from the United States — 31 M1 Abrams, enough to supply one Ukrainian military battalion. The Abrams is one of the most sophisticated tank systems in the world, but it requires specific training, technology for its parts and generally on specialised fuels to keep it running dependably. US officials said it would be at least months before the Abrams could be delivered — and would not elaborate — although other experts said it could take at least a year.

Britain, Germany and Poland have each committed to sending 14 tanks, with London predicting delivery of its Challenger 2s within weeks. Germany’s defence minister, Boris Pistorius, forecast it would take Berlin three or four months to ship its Leopard 2 tanks.

Poland has signalled it is already prepared to send its own Leopard 2 tanks to Ukraine. Portugal has said it could give four Leopard 2s, and Norway has said it could send eight more. Other pledges to give Leopard 2s — but without specifying how many — have been made by Spain, Finland and the Netherlands. And France is considering giving Ukraine an unspecified number of its Leclerc battle tanks. 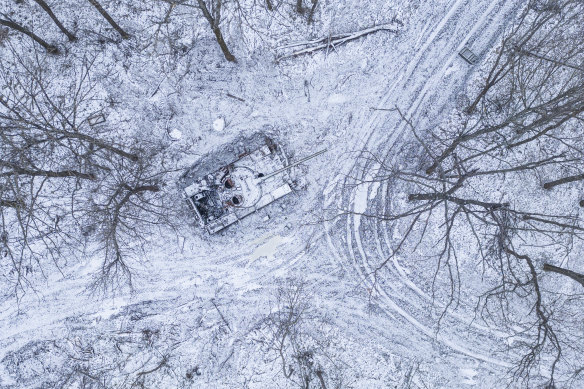 A destroyed Russian tank covered by snow stands in a forest in the Kharkiv region, Ukraine,Credit:AP

Additionally, Denmark has said it could send 20 Swiss-made Piranha tanks to Ukraine once the government in Bern agrees they could be reexported — a process that moved forward last weekend after being stalled for months.

In all, that means at least 105 Western tanks have been committed — in principle at least.

Ukrainian military officials have long said they need at least 300 Western tanks to make a difference in the war. That “is a lot of tanks at the national level,” according to an analysis Wednesday by Janes, the London-based intelligence firm.

European militaries are holding at least 2000 Leopard 2 tanks — and hundreds of other kinds of Western battle tanks. The Russians also have thousands of tanks still available in what has become a war of rapid attrition, said David Silbey, a military historian at Cornell University who specialises in battlefield analysis.

“The West will never manage a one-to-one match for those numbers,” Silbey said. “But, given the quality advantage of the Leopard or Abrams over even the most modern Russian tank, if the West could supply 500 to 1,000 tanks, it would make a massive difference to the Ukrainians and to the war.”

When will Ukrainian troops be ready to use them?

Some will be arriving in British training camps in the coming days to start training on the Challenger 2 tanks that London committed to this month, according to Vadym Prystaiko, Ukraine’s ambassador to the United Kingdom. 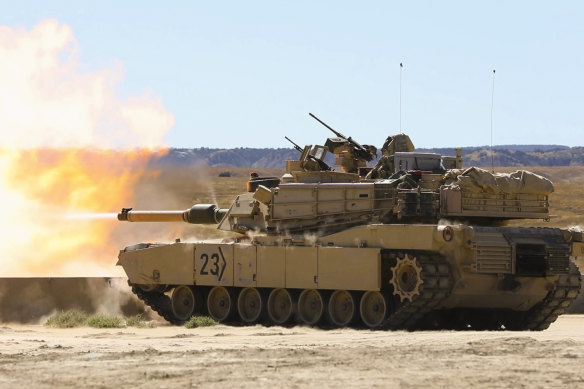 Ukrainians will need to be trained to use the US-made M1 Abrams tanks.Credit:.

Some former military officials and experts have challenged claims — mostly by the United States — that it could take months to train Ukraine’s forces to use the tanks. They note that the Ukrainian troops selected to crew them will have already been trained on Soviet-era tanks. So learning to operate the Leopard 2 tanks, which run on diesel fuel and are easier to operate than M1 Abrams, could take only three to four weeks “to achieve a basic proficiency,” the International Institute for Strategic Studies said this month.

US officials, who briefed journalists on condition of anonymity, described a far more complicated process for the M1 Abrams, involving training not just for operating the tanks, but also for maintaining them. Part of that process will involve building a stable supply chain to ensure the tanks are getting the fuel, parts and other assistance they would need on the front lines.

While the Abrams may not arrive on the battlefield for what one U.S. official described as “some time,” training Ukrainian troops to use them will begin quickly. Already, U.S. troops in Germany are training Ukrainian forces on a range of combined and coordinated weapons, including armoured combat vehicles.

Will they have enough ammunition?

Dwindling supplies of ammunition have been a bane for Ukraine’s forces almost since the start of the war, reliant as they are on diminishing stores of munitions that fit their Soviet-era tanks and other weapons. Captured Russian tanks have been an essential stopgap for Ukraine, but spare parts for them are often hard to acquire, according to Ukrainian soldiers.

The Western-made tanks use ammunition that is compatible with NATO stocks, meaning that they could be replenished by any of the 30 member states of the military alliance or their partners. The tanks will be delivered with some extra ammunition supplies. Still, the war has so drained Western stockpiles that some allies are growing nervous about whether they will have enough for other potential conflicts or even their own self-defence.

While the new Western tanks are essential for any future Ukrainian offensive operations, they may prove a headache for Ukraine’s legions of supply officers. The German and American tanks have different parts and maintenance regimes, and both fire types of ammunition different from those of the Soviet-era tanks that Ukraine currently fields.

How will they get to the battlefield?

The process of delivering Western weapons and other military equipment to Ukraine has been one of the most heavily guarded secrets of the war.

Concerns that Russia will target roads, railways or staging grounds for the materiel has required what officials and experts described as stealthy convoys, usually disguised or cloaked in darkness, to evade attack. Former Western military officials and experts described a patchwork of delivery routes, largely originating from hubs in Poland, Slovakia and Germany, that will be crucial to getting tanks, armoured fighting vehicles and huge guns to the front line.

Most of the weapons will be shipped either on rail cars or flatbed trucks that are strong enough to carry their huge weight. Rail is generally the fastest and safest way to move armour, experts said, given that long convoys of flatbed trucks would most likely attract Russia’s attention. It would take too much time, fuel and spare parts to drive the tanks and other armoured vehicles to the battlefield, experts said. They would also become, in essence, a moving target for Russian warplanes.

The risks are so daunting — and worries over provoking Russia are so high — that instead of Western forces or contractors delivering them to the conflict zone, Ukrainian troops are required to retrieve the weapons from depots in NATO territory.