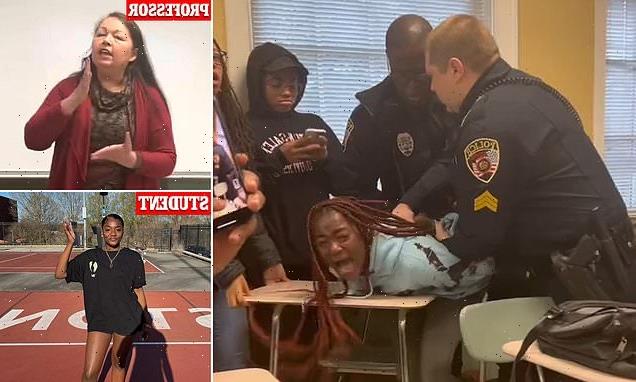 Viral video shows student, 20, being led out of classroom in handcuffs

Sobbing black student is handcuffed and arrested in class at black college after rowing with professor who told her to rewrite an essay: Claims her arrest was racially motivated

A shocking video posted online documents the moment a 20-year-old student was forced out of a classroom at a historically black college in handcuffs over an argument about an essay.

The video, posted to TikTok on Wednesday, shows officers handcuffing Leilla Hamoud at Winston-Salem State University following an apparent dispute between the student and her professor, Cynthia Villagomez.

Hamoud could be seen in the video sobbing and complaining that the police were hurting her as they forced her arms behind her back over what she says was a dispute about her final paper.

She is now facing misdemeanor disorderly conduct charges, and is due back in court on January 25, according to WXII reporter Louie Tran.

But many of the 4million people who have watched the video are questioning whether it was actually necessary for staff at the North Carolina black college to call for law enforcement. 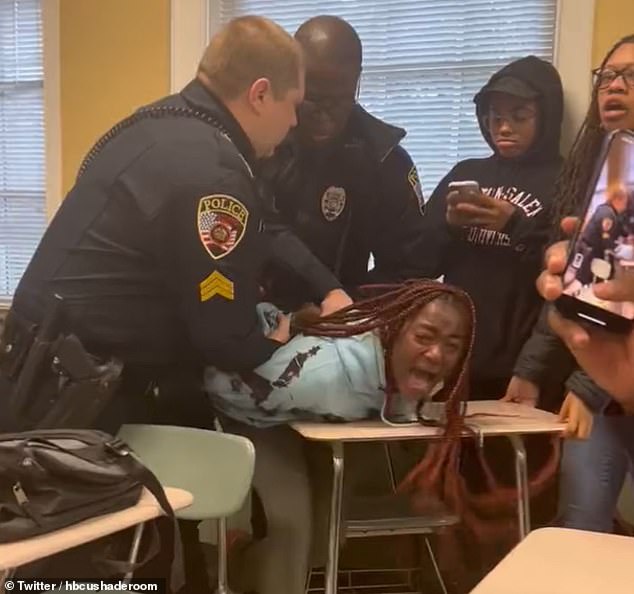 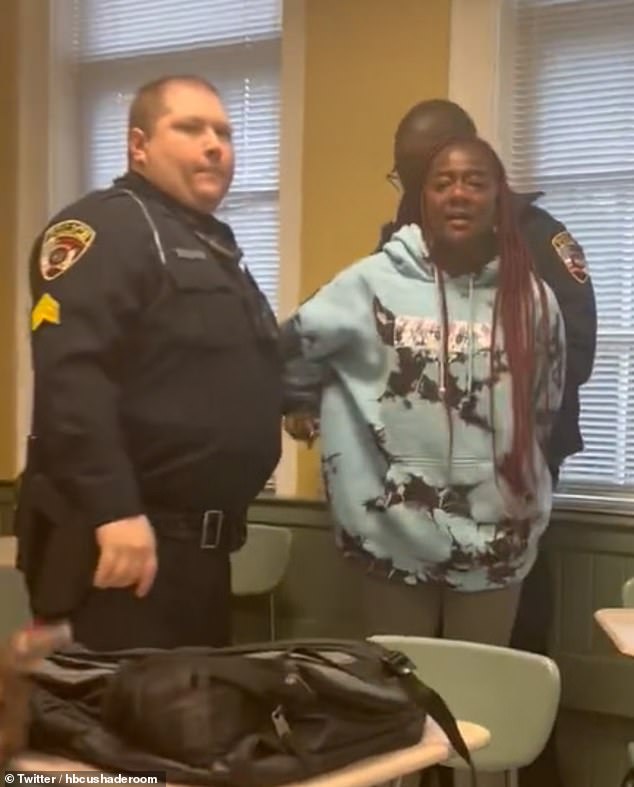 The viral TikTok begins with two officers — one of whom is white, while the other is black — forcing Hamoud onto a desk while they handcuff her behind her back.

The sobbing 20-year-old could be heard telling the cops ‘You’re hurting me real bad’ as her professor denies she called the local police force on the student.

‘I was trying to de-escalate,’ Villagomez, the co-chair of the school’s political science, history and social justice department.

‘You get me taken out in handcuffs because I won’t apologize?’

‘You started yelling at me, you tried to embarrass me about my paper. You’re a terrible teacher.

‘She’s sitting here and saying she love black people and stuff,’ Hamoud continues through tears. ‘You yelled at me first.’

The class then echoes that sentiment, apparently trying to stand up for Hamoud as she is taken out of the classroom.

Still, Villagomez could be heard saying: ‘I was trying to apologize.’

It remains unclear what led up to the arrest, but university spokeswoman Haley Gingles insisted the arrest was a last resort, and came at least 10 minutes after the dispute began.

‘From the time the initial disturbance started until the and when the video clip started, it was a significant amount of time,’ she told NBC News. ‘Certainly, it was more than 10 minutes.’

She also said that Villagomez was not the person who called 911 on Hamoud, claiming it actually came from another professor nearby who heard the argument. 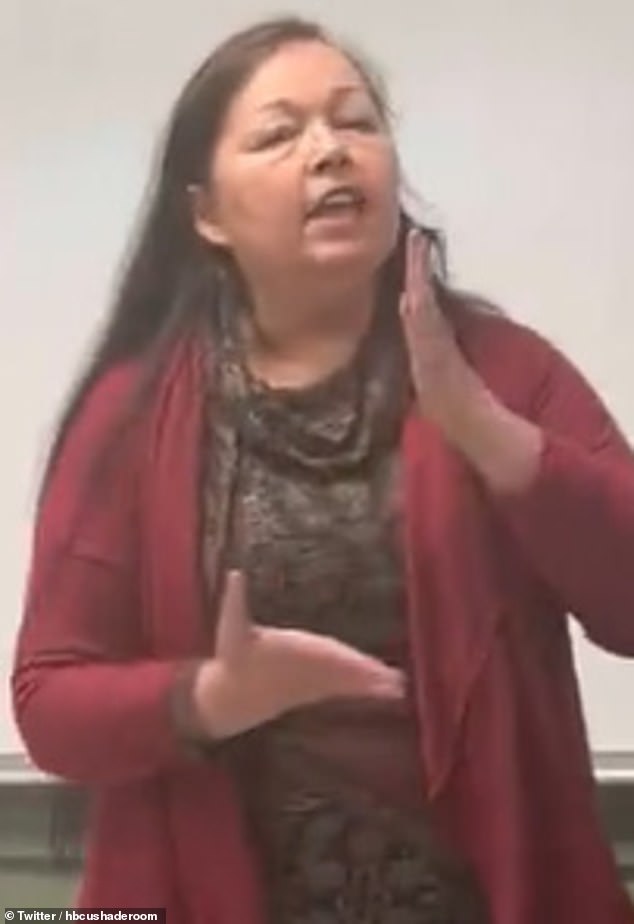 The professor, Cynthia Villagomez, could be heard saying she tried to de-escalate the situation as she apologized to the students

Hamoud, pictured, explained in an Instagram Live video that the arrest came when she refused to leave the classroom because she wanted to present her final project

University Chancellor Elwood Robinson also said in a statement that the ‘significant commotion’ prompted another ‘WSSU employee nearby’ to call campus police to ‘de-escalate the situation.

‘We strive for a safe, inclusive, thriving and intellectual community where all our faculty, staff and students feel respected and supported.

‘To that end, we will take swift and appropriate measures against any situation that contradicts those ideals.’

In an Instagram Live video following the viral incident, Hamoud decided to share her side of the story.

She said she and her classmates were part of a group project that included a live presentation set for Wednesday, but just hours before the group was set to present Villagomez emailed her telling her to redo the written portion of the assignment.

Hamoud said she felt that she did not have enough time to rework the essay before they were set to present, but attended class on Wednesday anyway.

‘I’m not going back and redoing this essay that took me two weeks and you told me six hours before,’ she said in the video. ‘And I still came to the final to present with my group because that was what we were supposed to do.’

After the class was briefly interrupted by a fire alarm, Hamoud said Villagomez started to get angry, saying she could either apologize for not redoing the essay or leave the classroom.

In response, Hamoud said, she said she decided to stay in the classroom and continue with the presentation, which she said made up a large percentage of her grade.

‘So, boom, she starts yelling at me telling me this is her class [and] it doesn’t matter what I think,’ Hamoud recounted. ‘I started getting loud back, I’m not going to lie to you guys, I was raising my voice too.

But, Hamoud said, Villagomez continued to demand she leave before the professor ultimately stormed out of the classroom herself to speak with one of her colleagues.

Soon, Hamoud said, campus police arrive on the scene, with a black officer entering and asking what had happened.

‘As I’m telling my story, the professor comes back in and says, “Yes officer, I want her taken out.”

‘At this point, I’m like Dr. V you’re going to lt them arrest me? And she’s trying to like fix herself,’ she said of the professor apologizing. ‘She said either apologize or get out.

She then revealed that she was charged with a second-degree misdemeanor but was released from custody as she did not have any prior misdemeanors. 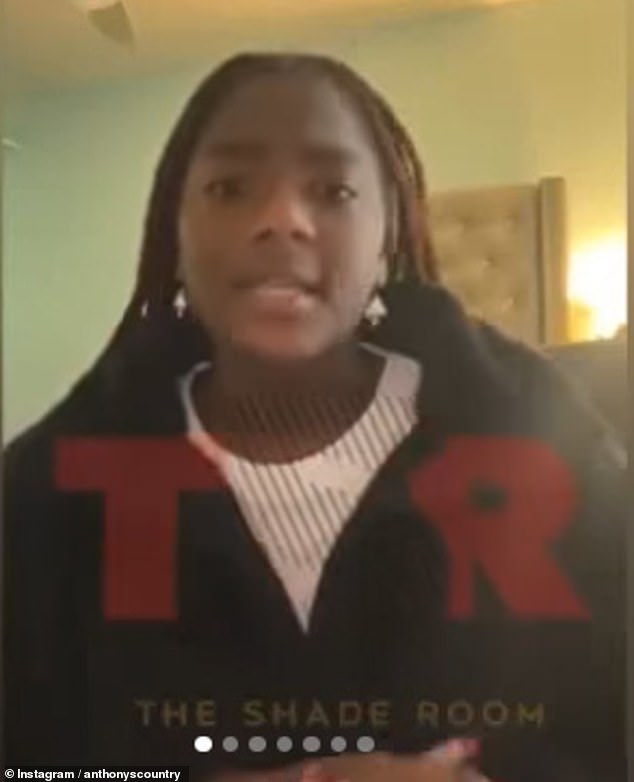 In the Instagram Live video, Hamoud says Villagomez was berating her about an essay she had asked her to rewrite just hours before Hamoud’s group was set to present their final project

Many online are wondering whether police were really necessary, saying it is another example of police being called on black people for non-threatening activity.

‘In any classroom power struggle or dispute, there is not a single scenario in which a law enforcement officer should b called into a classroom,’ Erika Strauss Chavarria, organizer of Black Lives Matter at Schools.

And as some on TikTok pointed out the incident happened at a historically black college, where black students are supposed to be safe.

‘Using the police as a weapon at a HBCU is wild,’ one commented.

Chavarria added: ‘The fact that this professor, who taches at an HBCU and still doesn’t have the historical knowledge or background or common sense to not call a police officer on a student is beyond me.’

School officials have since said they ‘understand that the weaponization of police is a prevalent problem in our community; however, that is not what happened in this incident.’

‘She’s struggling with the incident that happened yesterday,’ she said. ‘Over the course of the day, she has received threats and people have been vicious to her online.’