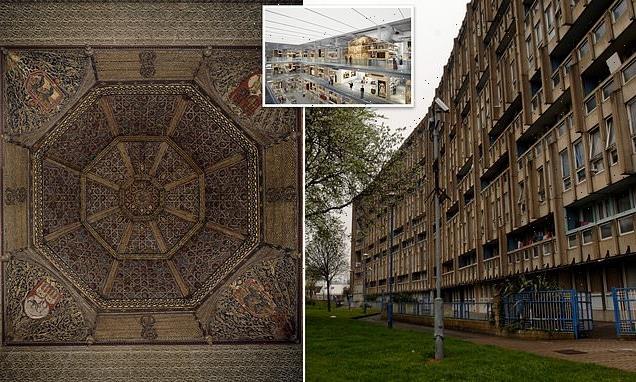 Ten-ton chunk of a 1970s east London housing estate and the carved ceiling of 15th century Spanish palace: V&A unveils exhibitions planned for its new museum set to open on the site of 2012 Olympics in 2024

A crime-ridden East London housing estate that has now been demolished is certainly an unlikely centrepiece for a Victoria & Albert Museum collection.

But V&A officials have revealed that a three-storey section of the 1970s Robin Hood Gardens estate in Poplar will be a major part of their new East Storehouse venue.

Conservators have spent 1,000 hours polishing a section of the brutalist estate which the museum in South Kensington bought in 2017 before it was knocked down.

Tim Reeve, chief operating officer at the V&A, claimed it was ‘one of the most complex object conservation and installation projects we have ever undertaken’.

The dilapidated concrete estate was knocked down after a campaign by architects such as Lord Richard Rogers and Lord Norman Foster failed to save it. 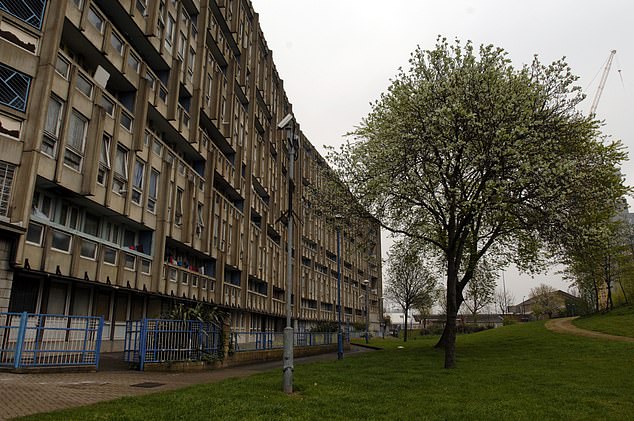 The 1970s Robin Hood Gardens estate in Poplar, East London, before it was demolished in 2017 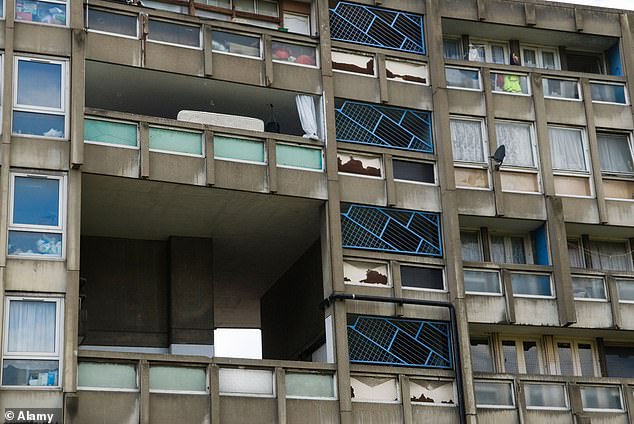 But the saved section which is made up of two maisonette flats will now sit opposite the 15th century ceiling of the Torrijos Palace in Spain, reported The Times.

The 10-ton façade will be part of a new exhibition in Stratford about social housing, displacement and regeneration in London, reported the Daily Telegraph.

The V&A East Storehouse and the V&A East are two new venues set to open in 2014 and 2025 respectively on the site of the London 2012 Olympic Games.

The exhibition at East Storehouse will also feature part of one of the ‘streets in the skies’ from the controversial estate as well an interior from one of the maisonettes. 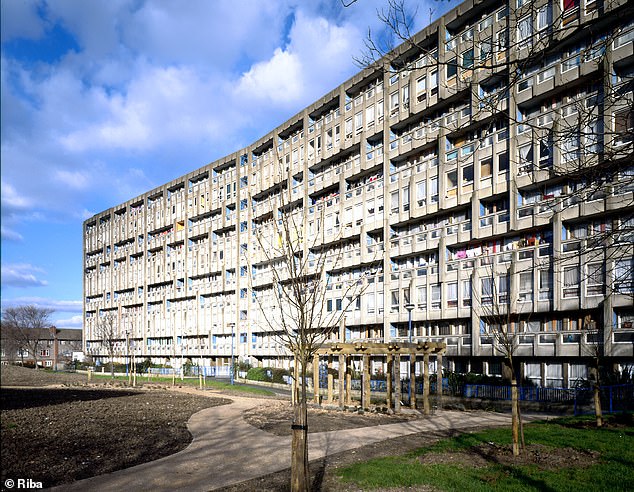 Visitors will learn about how the estate was intended to provide better housing for traditional East End communities but faced major problems with crime.

It also suffered from vandalism and the structure deteriorated, with English Heritage saying at the time of its demolition that it ‘fails as a place for human beings to live’.

But the estate, built in 1972 and designed by husband and wife Peter and Alison Smithson, is still seen as an important example of brutalist architecture.

Mr Reeve told the Telegraph: ‘In our surrounding display, we will put the experience of those who have lived in and around Robin Hood Gardens front and centre.’ 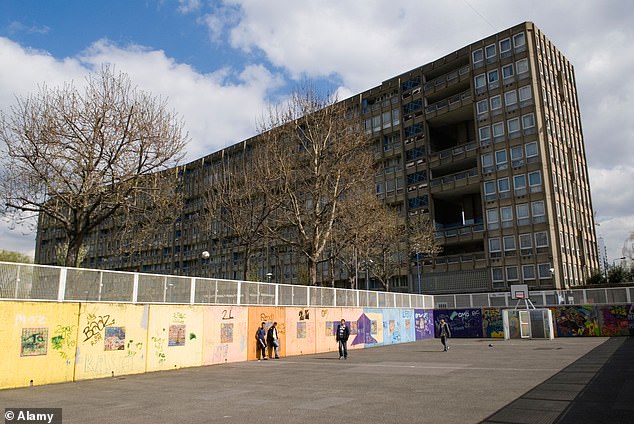 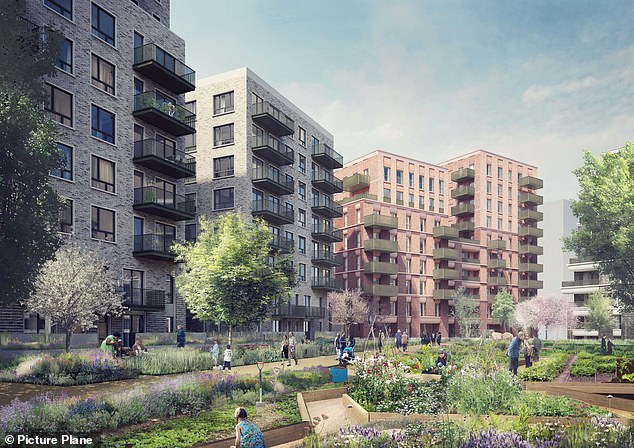 There are plans to replace the 252 flats on the estate with more than 1,500 new homes

He said he wanted to ‘spark new conversations about the impacts of regeneration, gentrification and social housing, and what it means for the future of our cities’.

At the time of purchase in 2017, V&A officials did not reveal how much they paid for the piece, but confirmed that they contributed to the costs of its extraction.

The section includes two maisonette flats – complete with doors, kitchen units, wardrobes, panelling and skirting boards – from the seventh floor of the estate.

In 2008, the Government said that it had decided not to list the block and the site is being developed to replace the 252 flats with more than 1,500 new homes. 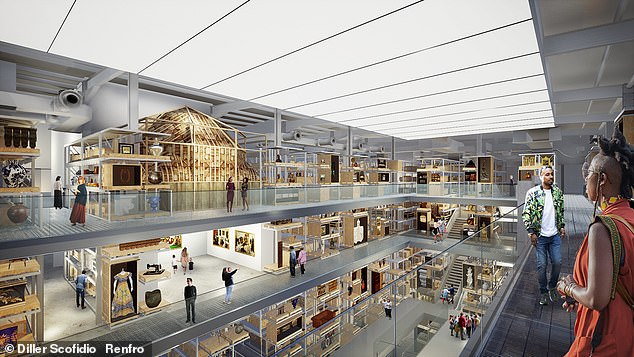 An artist’s impression of the V&A East Storehouse, where the estate section will be on show 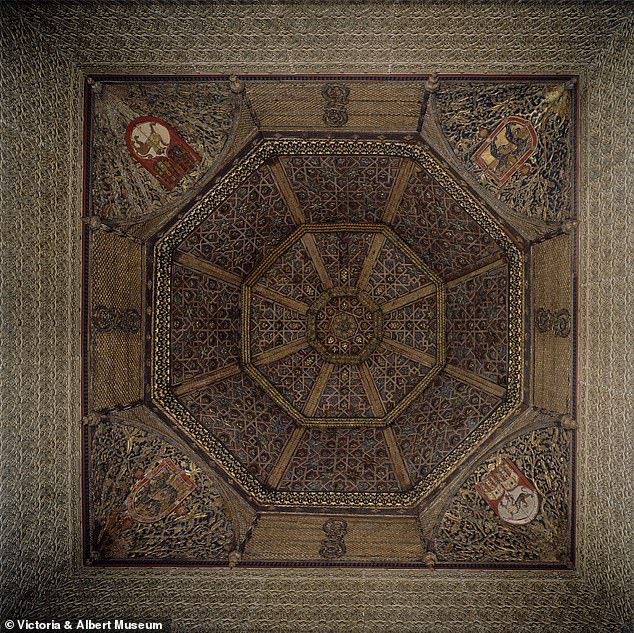 Fans of the block described Robin Hood Gardens as a 20th Century version of Bath’s Georgian terrace, the Royal Crescent.

The designers of the 1972 building, which featured in a TV documentary in the 1980s, were followers of Le Corbusier, a French pioneer of modernist architecture.

But 80 per cent of its 600 tenants supported plans to demolish the block and build new homes – and English Heritage advised that the building should not be listed.

This week, the V&A also announced parts of its upcoming programme for 2023, including the first ever major UK exhibition on Renaissance sculptor Donatello.