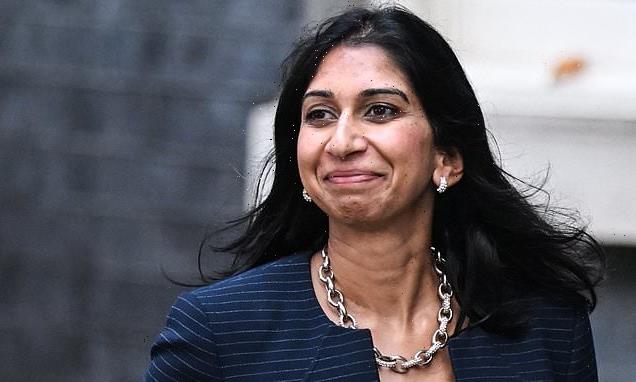 Suella Braverman tonight returned to the role of Home Secretary – just six days after she was dramatically forced to quit the position after breaking ministerial rules.

Rishi Sunak appointed Mrs Braverman back to her former job as the new Prime Minister carried out a reshuffle of Government ranks on entering No10.

She replaces Grant Shapps, who had filled the role for the six days Mrs Braverman was away from the Home Office.

It means Mr Shapps now holds the unenviable record – previously held by Mrs Braverman when her first 43-day spell in the role ended in disgrace – as the shortest-serving Home Secretary in modern political history.

Mrs Braverman’s return to the job of Home Secretary will be viewed as part of Mr Sunak’s efforts to woo the Tories’ right-wing as he bids to reunite the party.

She is popular among Conservative eurosceptics and was among the Brexiteer ‘Spartans’ who held out against Theresa May’s Brexit deal in 2019.

The 42-year-old holds a hardline stance on immigration and recently said it was her ‘dream’ to have a flight take off to Rwanda as part of the Government’s plans to send illegal migrants to the country.

Mrs Braverman has also spoken out on transgender issues and recently launched an attack on ‘the Guardian-reading, tofu-eating wokerati’ as she defended proposals to crackdown on environmental protests that have caused recent disruption. 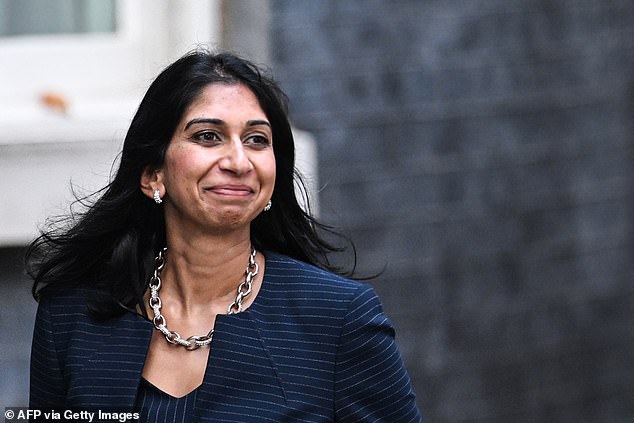 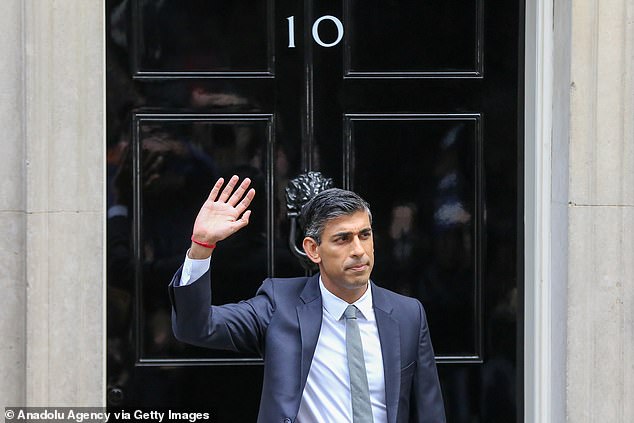 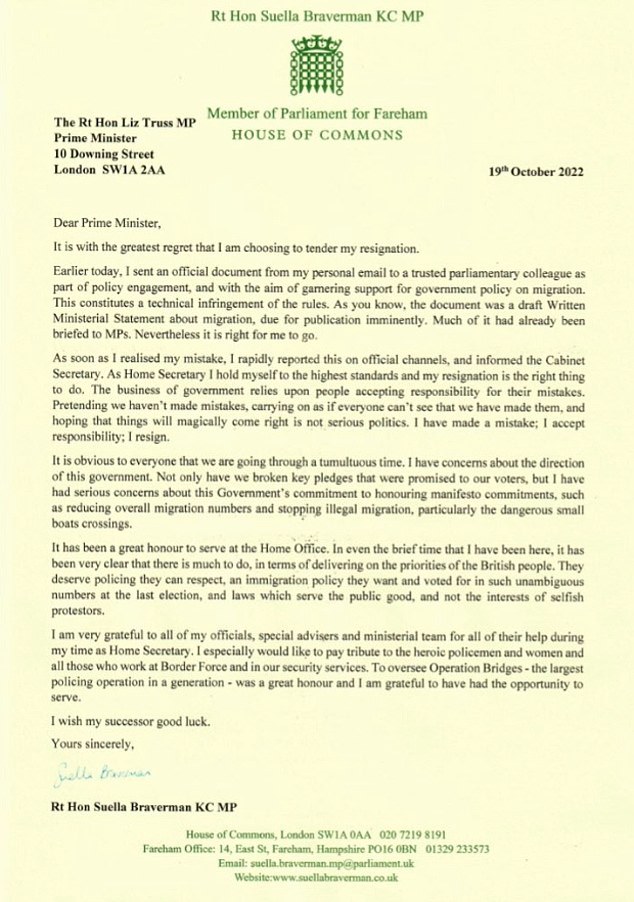 Mrs Braverman took a series of swipes at Liz Truss in her resignation letter, which revealed the huge tensions between the pair

It was her views on immigration that were revealed to have been the major factor behind Mrs Braverman’s departure as Home Secretary last week, when she left Liz Truss’s administration.

She and Ms Truss were claimed to have staged a ‘shouting match’ during a 90-minute meeting the night before her Cabinet exit.

Mrs Braverman was reported to have warned Ms Truss it would be ‘insane’ to relax immigration rules in order to boost economic growth.

The official reason for Mrs Braverman’s resignation as Home Secretary last Wednesday was her breaching of ministerial rules for sending an official document from her personal email.

But she took a series of swipes at Ms Truss in her resignation letter, which revealed the huge tensions between the pair.

‘I have had serious concerns about this Government’s commitment to honouring manifesto commitments, such as reducing overall migration numbers and stopping illegal migration, particularly the dangerous small boats crossings,’ Mrs Braverman wrote.

Ms Truss sent a terse reply to Mrs Braverman’s resignation letter, in which she said it was important that ‘Cabinet confidentiality is respected’.

At the weekend, it was reported that Mrs Braverman’s breach of the ministerial rules was more serious than the ‘technical infringement’ she had outlined as the reason for her departure.

According to the Sunday Times, Mrs Braverman emailed Cabinet papers to her private Gmail account and then on to senior Tory backbencher Sir John Hayes and, mistakenly, an assistant to another Conservative MP.

When Ms Truss resigned as PM a day after Mrs Braverman’s own depature, the now-returned Home Secretary was widely expected to run for the Tory leadership herself.

Mrs Braverman had previously made a bid for No10 when Boris Johnson resigned in July.

But she did not stage a second leadership campaign and insted put her support behind Mr Sunak as Ms Truss’s replacement.

Her return as Home Secretary suggests the new PM has given her assurances over migration policy, including the Rwanda scheme, as well as on Brexit issues such as the Northern Ireland Protocol.

‘He said he wants his Government to have “integrity, professionalism and accountability at every level” yet he has just appointed Suella Braverman to be Home Secretary again a week after she resigned for breaches of the Ministerial Code, security lapses, sending sensitive Government information through unauthorised personal channels, and following weeks of non-stop public disagreements with other Cabinet Ministers.

‘Our national security and public safety are too important for this kind of chaos. We don’t just need a new cabinet, we need a general election and a fresh start with Labour.’