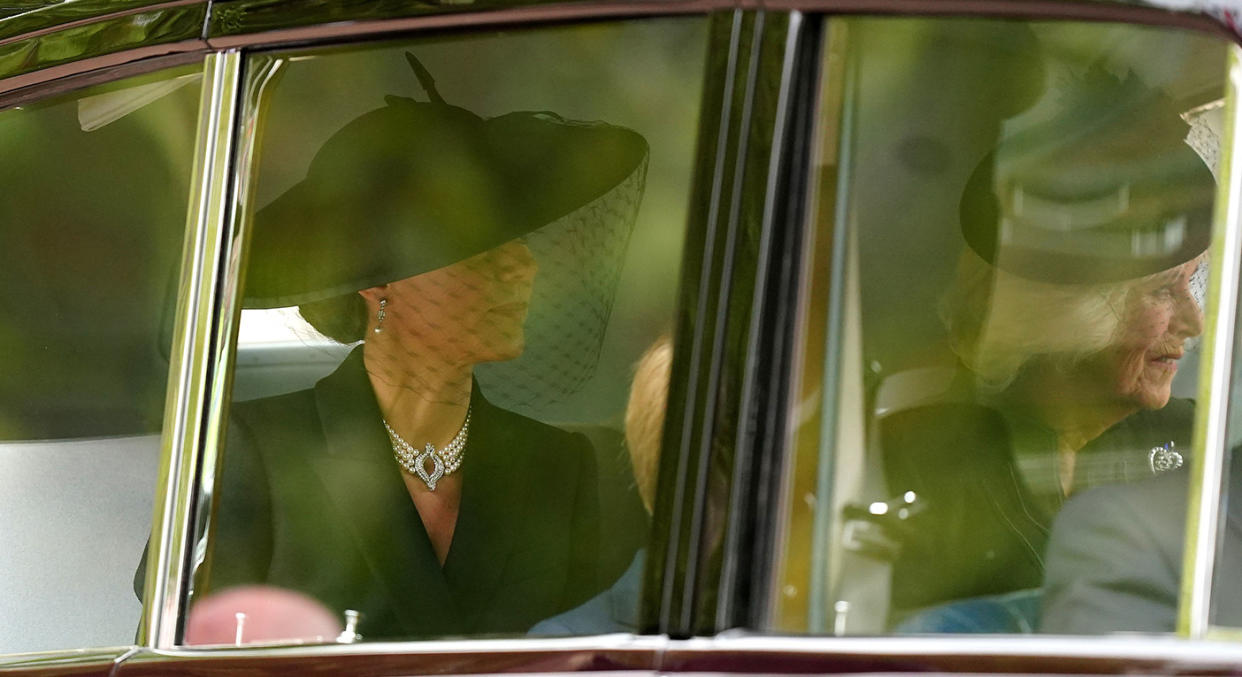 As is obligatory during mourning periods, Kate, 40, wore an all-black outfit for the sombre occasion, held at Westminster Abbey with over 2,000 guests.

Her Alexander McQueen coat dress is in the same style as a white one worn during the G7 Summit with Camilla, Queen Consort, and Queen Elizabeth. The British designer has long been a go-to for the Princess of Wales, with her 2011 wedding dress designed by the brand.

She also wore a wide-brimmed hat with a netted veil at the front. 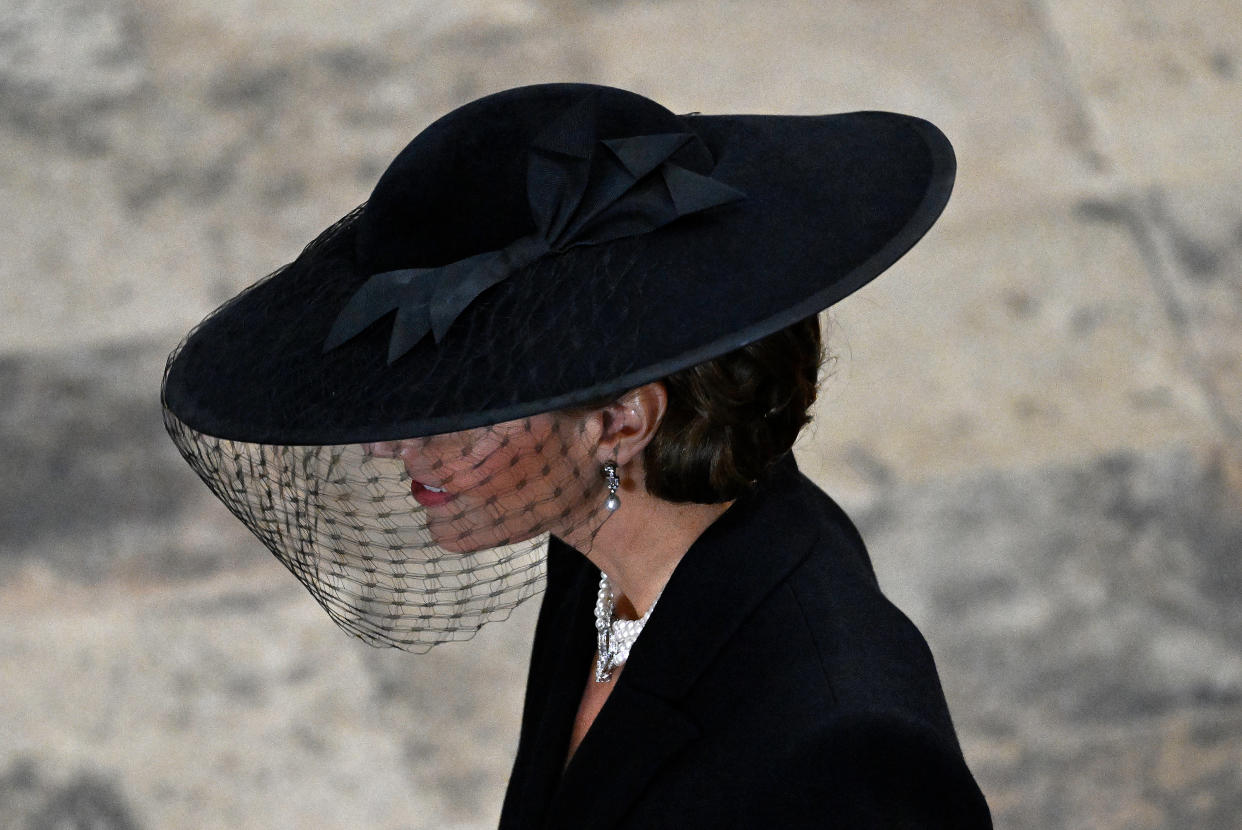 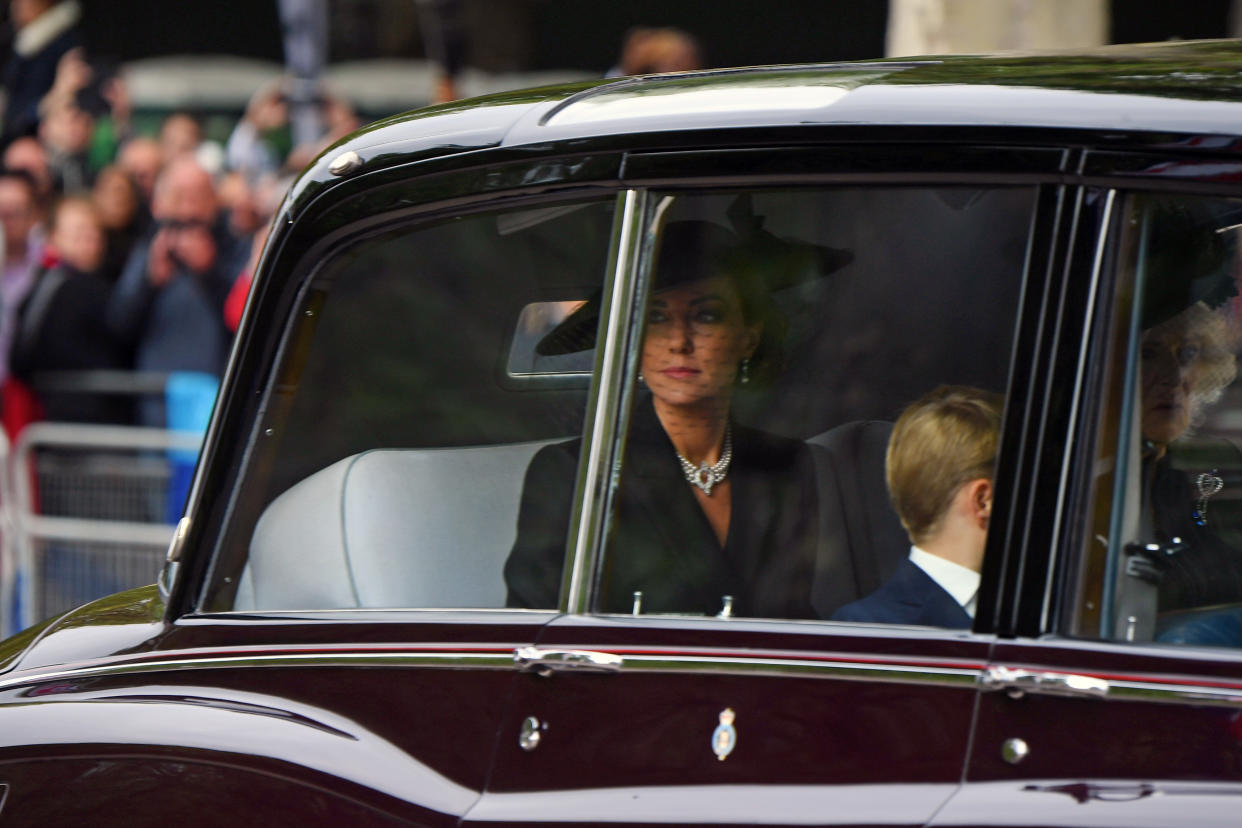 “It is traditional for veils to be worn at the funeral of a monarch,” says Bethan Holt, royal fashion expert and author of The Queen: 70 years of Majestic Style. So it makes sense that the Princess of Wales and Duchess of Sussex would make a “nod to the custom, even if they don’t fully cover their faces”.

Kate’s pearl necklace stood out against her V-neck coat dress, in her signature fit-and-flare style.

The Queen’s four-string pearl and diamond choker – that was also previously worn by her late mother-in-law, Princess Diana – has been on long-term loan to Catherine, Princess of Wales for some time. 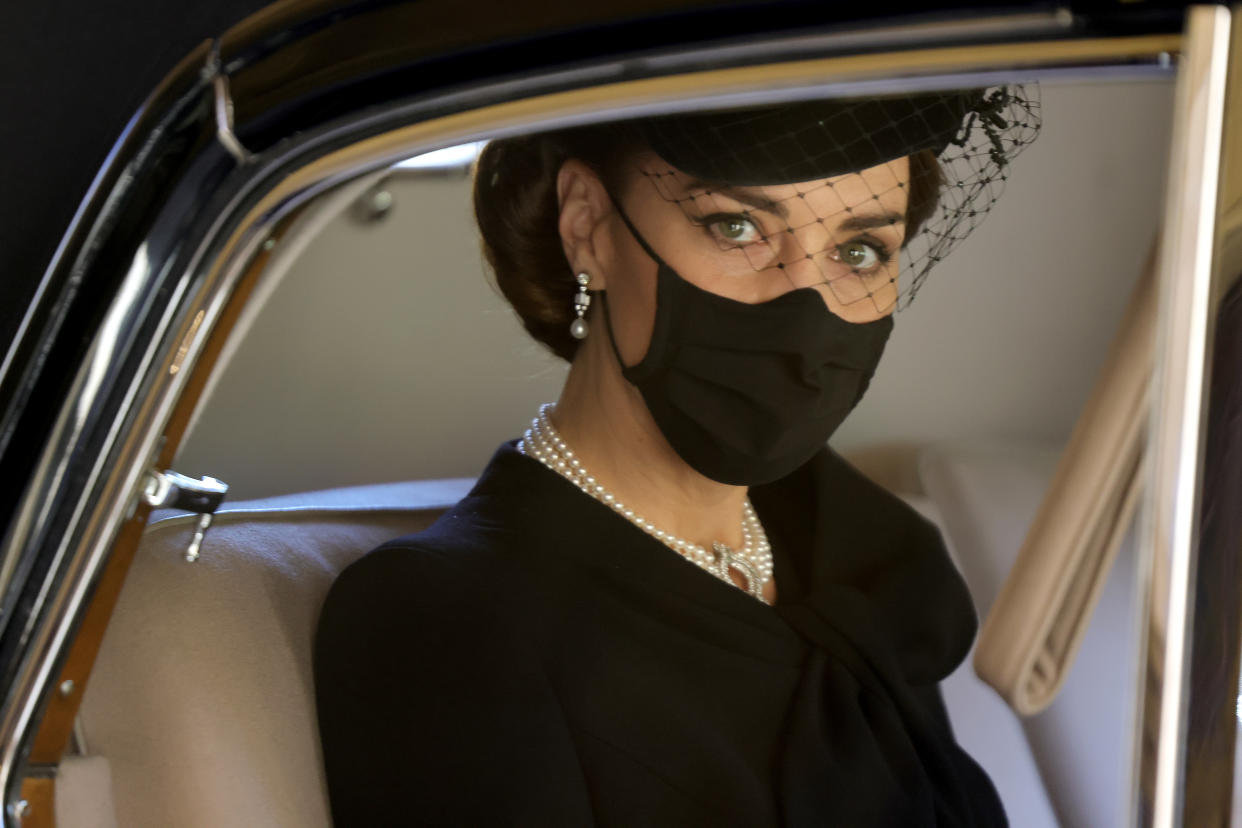 Kate previously borrowed the choker to wear to the Queen and Prince Philip’s 70th anniversary celebration in 2017, and later to the Prince’s funeral in 2021. Given the sentimental backstory behind the necklace, it’s no wonder she wore it again to honour the late monarch.

Featuring four strands of pearls and a diamond clasp, the choker was originally gifted to the Queen from Japan in the 1970s and she often wore it herself, including on a state visit to Bangladesh in 1983. 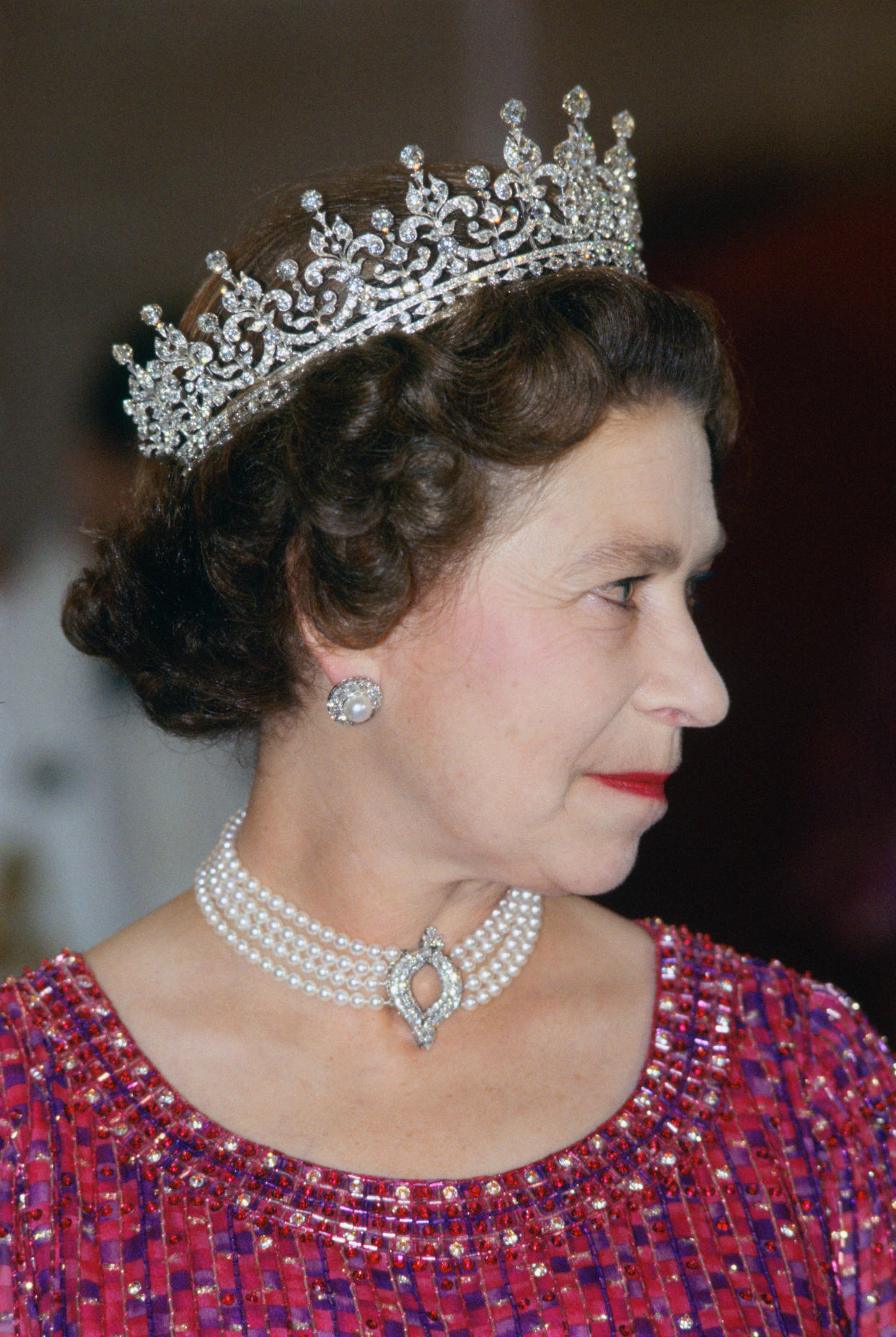 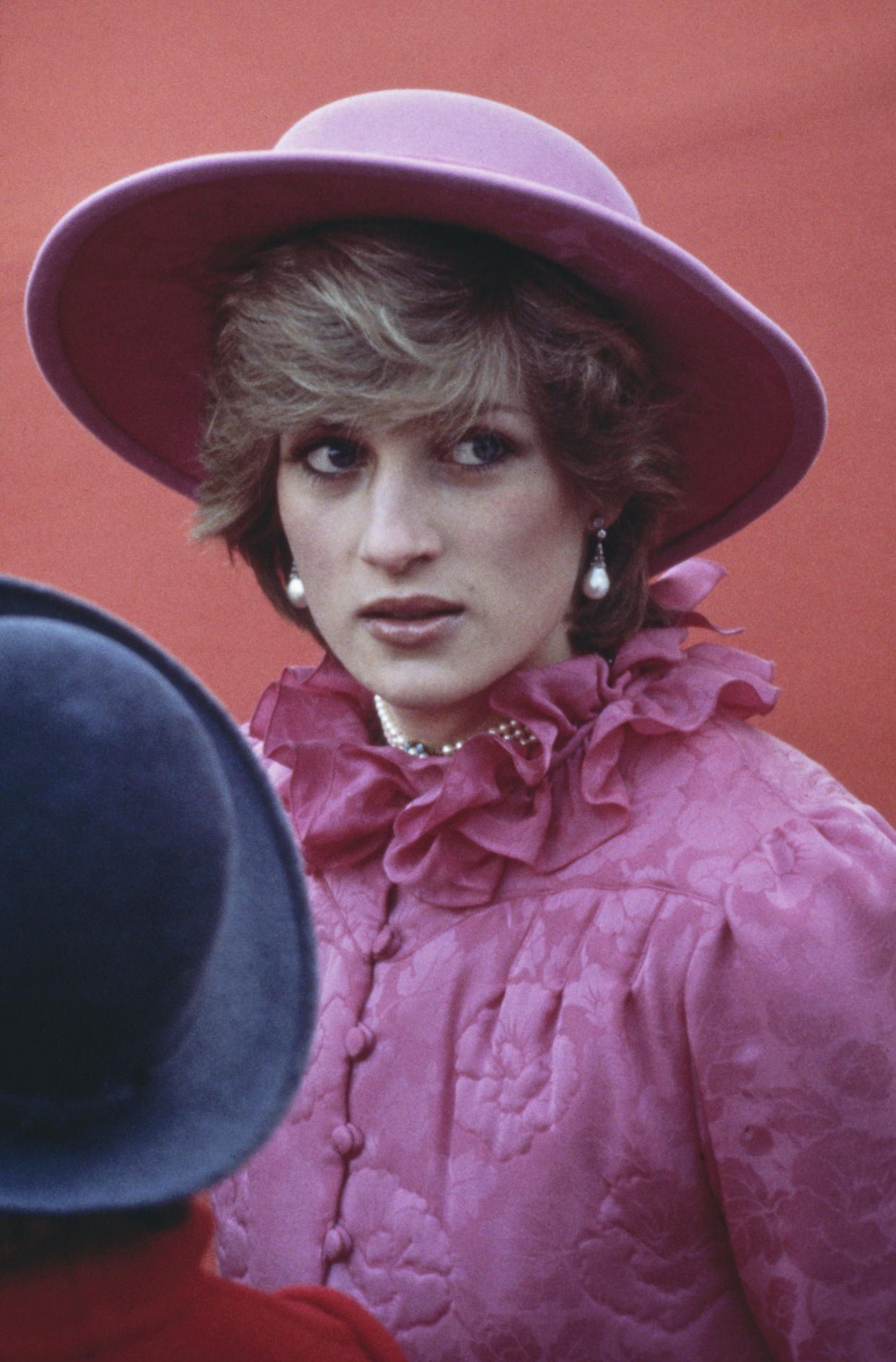 Lady Diana Spencer also borrowed the valuable piece of jewellery for several public appearances during her time as Princess of Wales, including a state visit to the Netherlands in 1982.

Kate also wore the Queen’s Bahrain pearl earrings for her funeral. Created from pearls gifted to the Queen on her wedding to Philip in 1947, the elaborate drop earrings feature a large, round brilliant-cut diamond with a smaller diamond below it; three baguette diamonds and three further small diamonds leading to the large drop pearl underneath.

The Princess of Wales has worn the sentimental earrings on several occasions in the past, including the funeral for Prince Philip in 2021, and the Remembrance Day service in 2016.