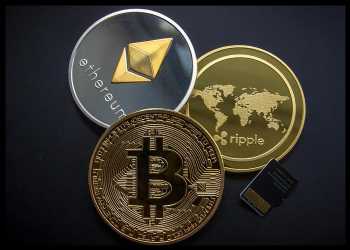 Cryptos Plunge Ahead Of Fed Meeting

Cryptocurrencies collapsed late on Sunday, declining close to 6 percent in the 24-hour horizon. Market capitalization has been declining in the past week, marked by the release of U.S. CPI numbers for August as well as the much-anticipated Ethereum Merge.

Exacerbating the bearish sentiment, the Federal Reserve as well as the Bank of England are set to announce interest rate reviews later in the week. With the recent uptick in inflation, markets are fearing whether the Fed would increase rates by as much as 100 basis points. Bank of England is seen raising rates by 50 basis points.

100th ranked BinaryX (BNX), a crypto token tagged to the metaverse, Play-to-Earn and Web 3 categories gained 6.7 percent in the past 24 hours.

64th ranked Helium (HNT) has also bucked the trend to rise more than 2.5 percent in the past 24 hours. The crypto coin had fallen to $3.97 on Sunday, amidst reports that a bug in Binance’s accounting system had caused users to mistakenly receive around $20 million worth of HNT tokens. HNT is currently trading at $4.63.

29th ranked Algorand (ALGO) has also rallied more than 1.5 percent in the past 24 hours.

21st ranked Ethereum Classic (ETC), a hard fork of Ethereum launched in 2016 is the biggest loser, having shed more than 13 percent in the past 24 hours.

96th ranked Kusama (KSM) has also shed more than 13 percent in the past 24 hours.

93rd ranked Celsius (CEL), 76th ranked Ravencoin (RVN) and 79th ranked Waves (WAVES) have all declined more than 10 percent in the past 24 hours.

ETHPoW (ETHW), a hard fork of the Ethereum blockchain that would remain on Proof-of-Work, ranked 2659 overall, dropped 29 percent overnight after a replay exploit caused 200 ETHW tokens to be siphoned off. Blockchain security company BlockSec which alerted the fraud also indicated that the exploit happened through the Omni Bridge on the Gnosis chain.