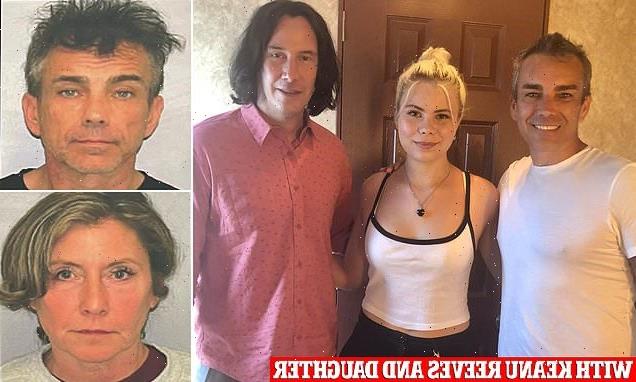 Producer of ‘Bill and Ted’ sequel and his girlfriend are arrested for $1M double burglary in Manhattan and Sag Harbor: Police find stash of guns, cash, art, wine and 750 grams of ketamine

One of the producers of the hit movie Bill and Ted: Face the Music, a sequel to the 1980s comedy classic, is behind bars alongside his estranged girlfriend after the pair were accused of a wild burglary spree in New York.

On Tuesday, the Suffolk County District Attorney announced the arrest of Raymond Bouderau and Jacqueline Jewett. The pair’s robbery scheme netted them more than $1 million in guns, including an AR-15, jewelry, wine and cash, the DA said at a press conference.

The robberies  took place at two homes, one in Manhattan, where Bouderau lives, and the other in affluent Sag Harbor on Long Island’s North Fork.

The target of the thefts was a woman who was dating Jewett’s former lover. Jewett, a divorced mother of six, planned the burglaries as she knew the woman was on vacation, using the victims iCloud data to track her movements, officials said. 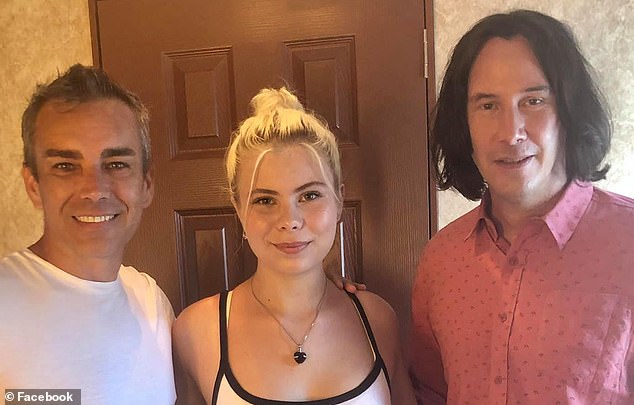 District Attorney Raymond Tierney said at the press conference: ‘If there’s one thing that this case illustrates is that life is not like the movies, and in Suffolk County, if you steal other people’s property.’

He continued: ‘Whether its at the point of a gun or in this case through the planning of an elaborate heist, the Suffolk County District Attorney’s office, along with out law enforcement partners, will hunt you down and you’ll be held responsible.’

Bouderau and Jewett are facing felony grand larceny charges. The AR-15 that was recovered had the serial number scratched off and is commonly referred to as a ‘ghost gun.’

Tierney said: ‘Pictures of artwork and some stolen materials were found on Bouderau’s phone, and it is believed he was looking at various pieces of artwork to try to determine their worth.’ 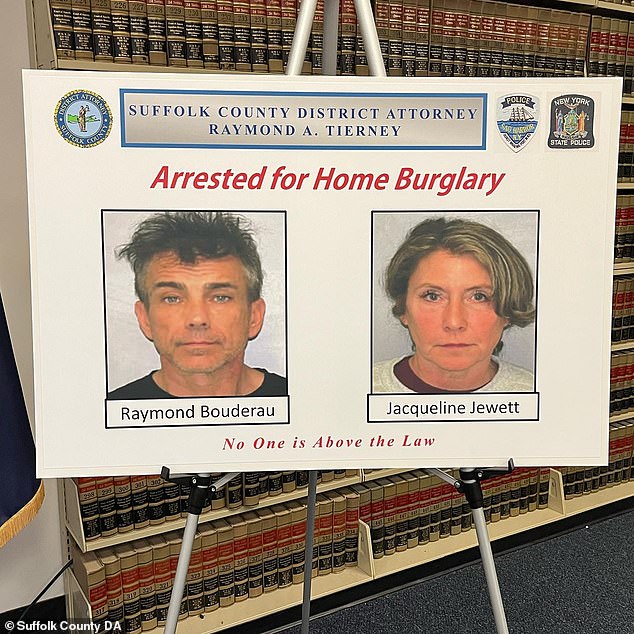 Bouderau and Jewett were arrested on November 30, according to the Suffolk County DA’s office 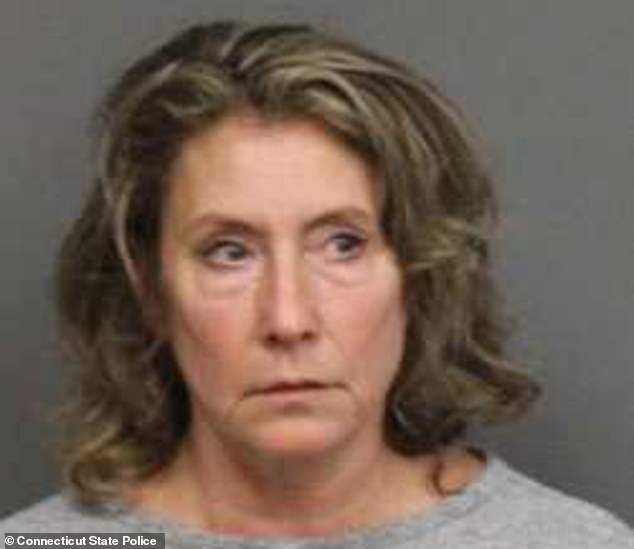 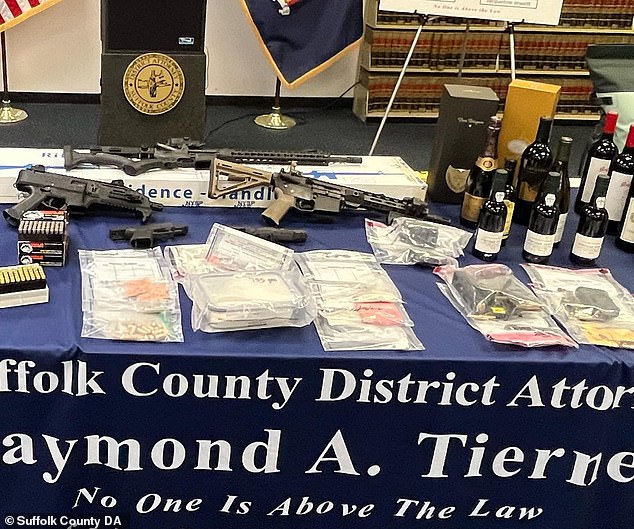 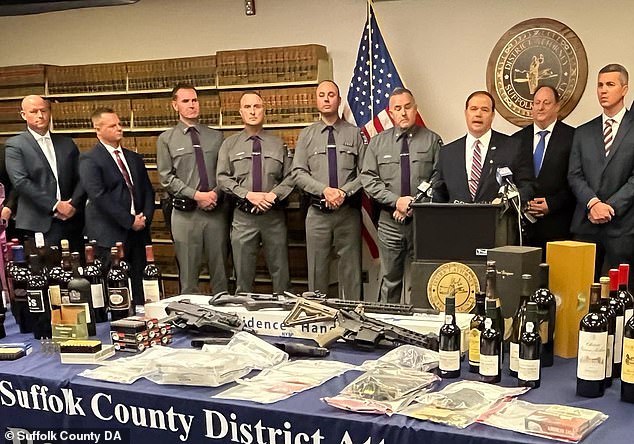 District Attorney Raymond Tierney said at the press conference: ‘If there’s one thing that this case illustrates is that life is not like the movies, and in Suffolk County, if you steal other people’s property’

The DA said that the pair broke into the home in Sag Harbor on September 22 through a basement window. While downstairs, the duo cut off the electricity. From there, Bouderau and Jewett broke into multiple safes and thrashed the house.

On September 25, the couple broke into the woman’s home in Manhattan. The pair were linked to both crimes through iCloud data and a license plate reader. Bouderau’s pick-up truck was used in both crime, the DA said.

When a warrant was served at Bouderau’s home in Manhattan on November 30, investigators found an AR-15 rifle, 50 bottles of wine and 750 grams of ketamine aka Special K. On the same day, Jewett admitted to her role in the theft.

According to a press release from the Suffolk County DA’s office, Bouderau is being represented by the Legal Aid Society.

Pictures on Bouderau’s social media show him with A-list movie stars such as Keanu Reeves and Alec Baldwin. 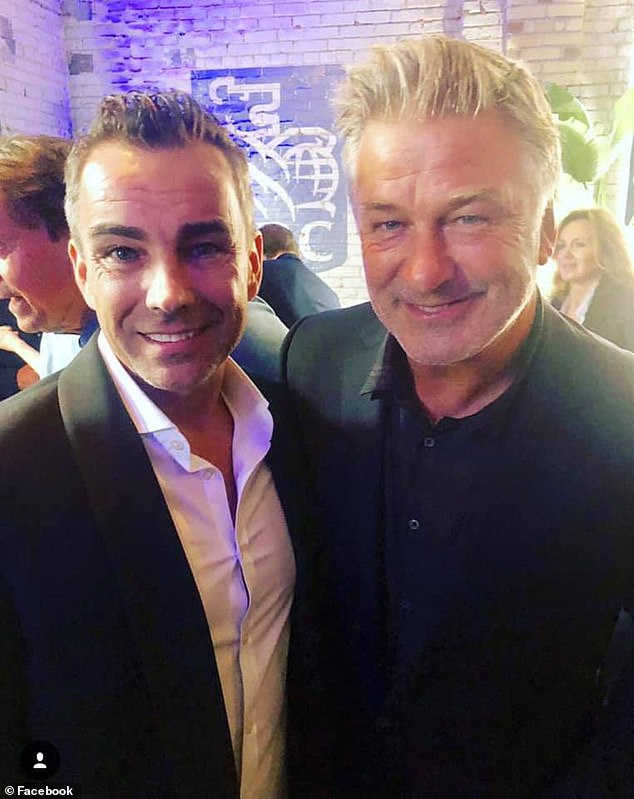 According to a press release from the Suffolk County DA’s office, Bouderau, pictured here with fellow New Yorker Alec Baldwin, is being represented by the Legal Aid Society 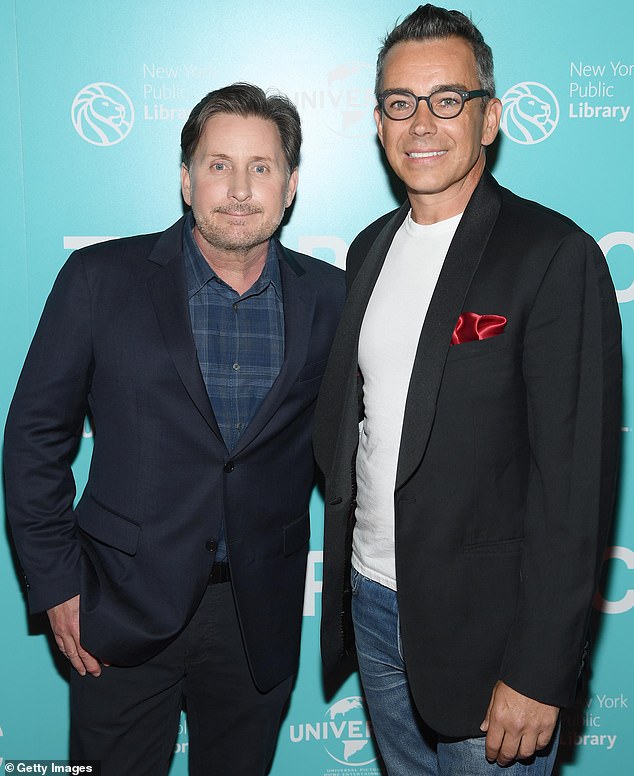 On the website for Living the Dream Films, Bouderau is listed as the CEO. His bio reads: ‘Bouderau has had a lifelong love affair with movies and television. From a restaurant and bar owner to construction and New York City real estate, Ray continues to push to the edges of everyday life.’

His bio says that he has worked with stars such as Amanda Seyfreid, Alec Baldwin, Johnny Depp, Adam Levine and Taylor Schilling. The profile links to various social media pages, all of which have been disabled at the time of his arrest.

In a 2018 interview, Bouderau said: ‘I’m a Philanthropist. I have been fortunate in life so I believe it’s my duty to give back and also help draw attention to the less fortunate.’ During that piece, he credits getting sober with helping achieve his life goals.

Bouderau worked with Baldwin, as well as Emilio Estevez and Christian Slater, in the 2018 movie The Public.

His most recent movie, a World War II movie titled Burning at Both Ends, not widely released.

The Guardian’s review said that the film had ‘the kernel of a good idea’ but ‘timid film fails to fully capitalize on [the] uncomfortable scenario and misses opportunities elsewhere, instead going big on self-satisfied pieties about fighting the just fight.’

According to her LinkedIn page, Jewett is a resident of Westbrook, Connecticut. She is a graduate of St. Lawrence University and The State University of New York. At the time of her arrest, Jewett says that she is working as a college admissions advisor.

While on Facebook, Jewett refers to herself as: ‘Courageous-Resilient-Connector-Leader-Listener-Educator-Mentor-Friend- ATM(Awesome Terrific Mom).’

Court records show that Jewett is being held on a bond of $400,000 while Bouderau’s was set at $650,000. Speaking to Newsday, Jewett’s attorney Gerard McCloskery said: ‘She’s pled not guilty. She’s a 57-year-old woman who has never been in any legal trouble in her life.’

Jewett turned herself into authorities on November 30 after she was told that there was a warrant out for her arrest.