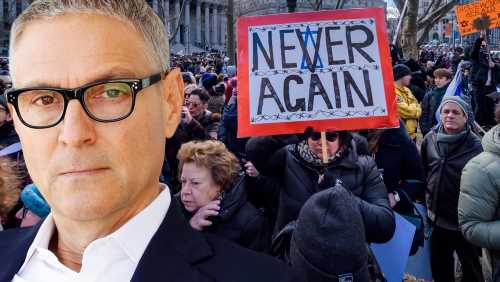 Ari Emanuel returned to his hometown today to decry “the virus of antisemitism and hate and division” that is “spreading and attacking the foundations of our culture.”

In an op-ed for the Chicago Tribune, the Windy City-born Endeavor CEO called out the “cartoonish Kanye clown show,” Dave Chappelle, the Republican Party and Donald Trump for “the normalization of white supremacy, antisemitism and racism” in American society. “In the last year, we’ve seen how antisemitic conspiracies from the far right about Jewish control of politics, finance and Hollywood have become mainstreamed,” the former agent to the ex-Celebrity Apprentice host wrote (see the full op-ed below)

“So yes, keep our eye on the bigger picture — of course condemn cartoonish antisemitism and racism and hate, but also condemn more subtle and insidious forms of conspiracy theories that have no basis in fact,” Emanuel concluded in the op-ed.

Today’s piece by the sharp-elbowed exec, who in 2006 decried a drunken anti-Semitic rant by future WME client Mel Gibson, follows a Financial Times op-end that Emanuel wrote back in October pushing agencies, business and sponsors to cut ties with Kanye West after the man now legally known as Ye went on a vile antisemitic social media tirade. “Those who continue to do business with West are giving his misguided hate an audience,” said Emanual in the FT piece.” There should be no tolerance anywhere for West’s anti-Semitism.”

Of course, that was before former CAA client West went on Alex Jones’ InfoWars to praise Adolf Hitler and Nazis at the beginning of this month.

West soon afterwards posted a tweet an image of a swastika inside a Star of David on the Elon Musk-owned Twitter – – a move that caused even the GOP to delete a long-posted tweet praising West, Trump and Musk

Prompting wide-spread condemnation, West’s hate speech, which is ongoing, saw Musk freeze West’s feed on the social media platform. Musk, who has been bringing back the accounts of formerly suspended figures like Trump in recent weeks, said that he “tried my best” with old pal West. “Despite that, he again violated our rule against incitement to violence. Account will be suspended,” the often-indiscriminate billionaire added.

Doubling down in the vilest fashion, West brought white nationalist and Holocaust denier Nick Fuentes to dinner with Trump at the ex-POTUS’s Mar-a-Lago estate on November 22. Amidst the fallout from the trio breaking bread together, Trump associates have claimed their boss had no idea who Fuentes was or that he even was coming to dinner. Still, having recently officially announced his 2024 bid to get back in the White House, the QAnon signaling Trump has yet to renounce Fuentes or West. In fact, Trump has renewed his demand that Jewish leaders in America don’t give him enough credit.

Deadline reached out to Endeavor for further comment from Emanuel. An Endeavor spokesperson replied that Emanuel’s perspective is reflected in the op ed.

Kanye West is not the big problem. Of course, praising Hitler is vile. And it’s easy to condemn – and get distracted. And what the cartoonish Kanye clown show distracts us from is what’s going on under the big top — how the virus of antisemitism and hate and division is spreading and attacking the foundations of our culture.

In the last year, we’ve seen how antisemitic conspiracies from the far right about Jewish control of politics, finance and Hollywood have become mainstreamed. Dave Chappelle’s Saturday Night Live monologue was funny, but the problem with dancing on the line of antisemitic tropes is that he was doing it for an audience that no longer has a shared understanding of how dangerous they are. No doubt many thought it was funny. No doubt that it gave others permission to repeat their own versions of the tropes going forward. Every time someone like Kanye goes too far, the antisemitic Overton window gets shifted. And bit by bit, the line of what’s acceptable to say moves.

It was not until Kanye praised Hitler that the official Twitter account from the Republican House Judiciary Committee took down the tweet reading, simply: “Kanye. Elon. Trump.” The tweet had been up since Oct. 6. As writer Peter Beinart put it on Lawrence O’Donnell’s MSNBC show The Last Word, “antisemitism is not disqualifying. Only genocidal antisemitism — that’s where the bar is for today.”

For today. It’s up to all of us to stop regarding silence as an acceptable option — not just for cartoonish praising of Hitler, but for more insidious, wink-wink, dog-whistle forms of hate directed at any group. At his postgame news conference on Nov. 30, LeBron James spoke out about the double-standard on being asked to speak out. He asked reporters why he’d been repeatedly pressed about the controversy over Kyrie Irving (about which, in fact, LeBron did speak out), but hadn’t been asked a single question about the 1957 photo, published last month in The Washington Post, showing Jerry Jones in a group of teens confronting Black students at a high school in Little Rock, Arkansas.

James is absolutely right. We should all speak out — about the hateful racism that’s unfolding in the photo, about Kyrie, about West, about Trump, and about the normalization of white supremacy, antisemitism and racism.

As The New York Times reported on Dec. 2, data from the Center for Countering Digital Hate, the Anti-Defamation League and groups tracking social media shows that posts that are antisemitic, racist or homophobic have surged.

As the Trump years have shown, things can be shocking without being surprising. As Yair Rosenberg argues in The Atlantic, the hateful writing has been on the wall since Trump descended on the escalator in 2016. “It didn’t take foresight or even educated guesswork to perceive that Trump would activate the ugliest underbelly of American politics,” writes Rosenberg. “It just took seeing what was already in front of your face.”

And six years later, a lot more of it is in front of our faces, and all around us. As outrageous as West is, the insidious part is that a generation of kids is being exposed to old, even ancient, tropes of antisemitism through very modern forms of technology and pop culture. Instead of getting distracted, let’s show kids a better path. Yes, it’s great that West’s platform to praise Hitler might shrink, but more corrosive is that the conspiracy theory of a cabal of Jews controlling politics, finance, medicine and entertainment is taking root.

This has threatened, as is likely one of the goals, to divide two communities — African Americans and Jewish Americans — that have historically been aligned on civil rights. Michael Schwerner, James Chaney and Andrew Goodman — the young civil rights activists slain by the Ku Klux Klan in Mississippi on June 21, 1964 — were far from the only examples.

Right now in Georgia, the newly re-elected Sen. Raphael Warnock is deeply aware of this shared history. In his victory speech late Tuesday night, Warnock called out Schwerner, Chaney and Goodman, along with Viola Liuzzo and James Reeb, as “martyrs of the movement.” And he went on to note the symbolism of Georgia’s current representation in the Senate. “Georgia, once again — as you did in 2021 when you sent an African American man and a Jewish man to the Senate in one fell swoop — you are sending a clear message to the country about the kind of world we want for our children,” he said.

But as the past few years have made clear, that kind of world is certainly not guaranteed. As the old saying goes, history doesn’t repeat itself but it rhymes.

So yes, keep our eye on the bigger picture — of course condemn cartoonish antisemitism and racism and hate, but also condemn more subtle and insidious forms of conspiracy theories that have no basis in fact.

Will Russia’s Invasion Of Ukraine Set The Agenda For International Oscar Race?