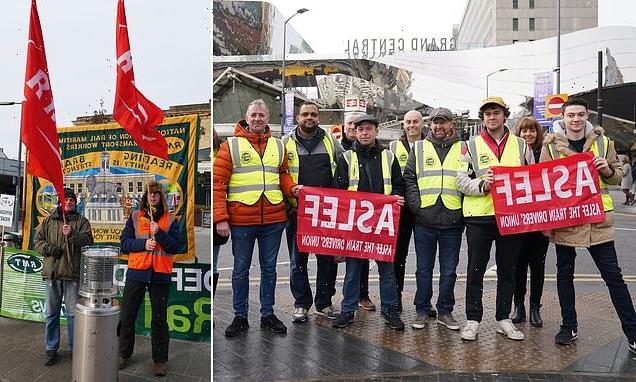 Train drivers are to stage a fresh strike early in the New Year, threatening five days of travel chaos as people return to work after the festive break.

Members of the drivers’ union Aslef at 15 train companies will walk out on Thursday January 5 after overwhelming votes for more industrial action in the long-running dispute over pay.

Meanwhile militant barons at the Rail, Maritime and Transport (RMT) union at Network Rail and 14 train operators are planning to strike on January 3, 4, 6 and 7, so services are set to be crippled for a week. 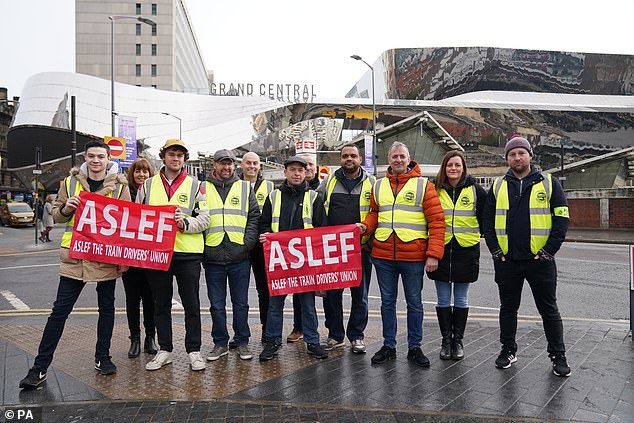 Aslef members will be hitting the picket lines on January 5 with members from 15 companies walking out. Pictured are rail workers on the picket line at Grand Central Station, Birmingham on November 28 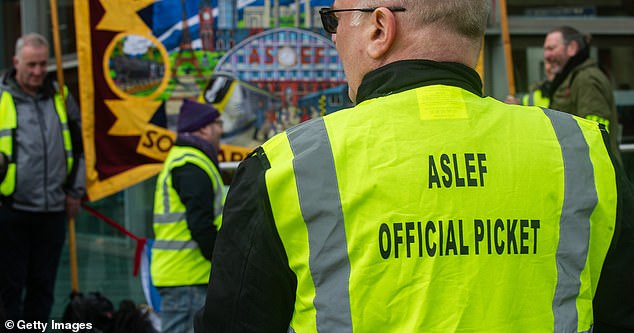 Aslef workers will be going on strike on January 5, bringing five days of New Year travel chaos on the railway lines. Pictured are Aslef members on November 28 in London

Aslef general secretary Mick Whelan said: ‘We don’t want to go on strike but the companies have pushed us into this place.

‘They have not offered our members at these companies a penny, and these are people who have not had an increase since April 2019.

‘That means they expect train drivers at these companies to take a real-terms pay cut, to work just as hard for considerably less, when inflation is running at north of 14 per cent.

‘We are always happy to negotiate – we never refuse to sit down at the table and talk – but these companies have offered us nothing, and that is unacceptable.’

Aslef had to ballot members again because a mandate, under the law, is only valid for six months, and said its members voted overwhelmingly, again, to take strike action.

Mr Whelan added: ‘The resolve of our members is rock steady. A 93 per cent “yes” vote – up on the very high figure last time – on an average turnout of 85 per cent shows that our members are in this for the long haul. It shows just how angry and determined we are. 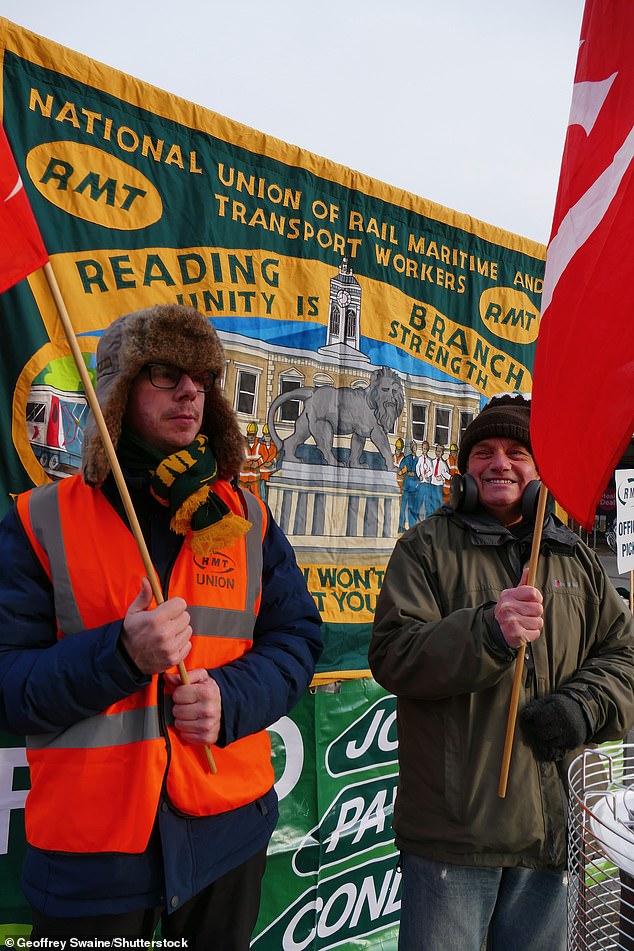 Railway unions have already caused months of misery for commuters, with strikes having blighted services throughout the year. Pictured: the RMT picket line in Reading on December 17 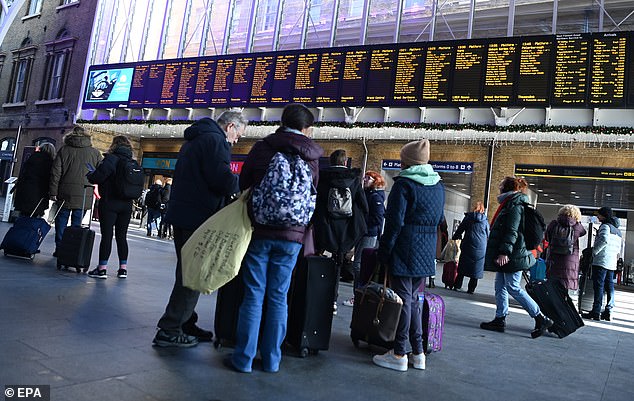 Railway strikes are now planned for January 3, 4, 5, 6, and 7, bringing a fresh wave of misery for commuters across the UK

‘We now have a new mandate for industrial action for the next six months. The way to stop this is for the companies to make a serious and sensible offer and for the Government not to put a spoke in the wheels.

‘We don’t want to inconvenience passengers. Our friends and families use the railway, too, and we believe in investing in rail for the future of our country – and drivers don’t want to lose a day’s pay.

‘That’s why strikes are always a last resort, but the intransigent attitude of the train companies, with the Government acting, with malice, in the shadows, has forced our hand.

‘Because these drivers, who were the men and women who moved key workers and goods around the country during the pandemic, have not had a pay rise for nearly four years.

‘With inflation running at 14 per cent the companies and the Government are saying that they want us to take a real-terms pay cut.

‘The companies need to come to the table with a proper proposal to help our members, their drivers, buy this year what they could buy last year.

‘That is the way to prevent another strike and all the disruption that causes. The ball is now firmly in the train companies’ court, and we are calling on the Government to help – and not hinder – the negotiating process.’

News of the strikes comes hours after Prime Minister Rishi Sunak warned striking workers he will hold out against their ‘unreasonable’ pay demands for months if necessary. 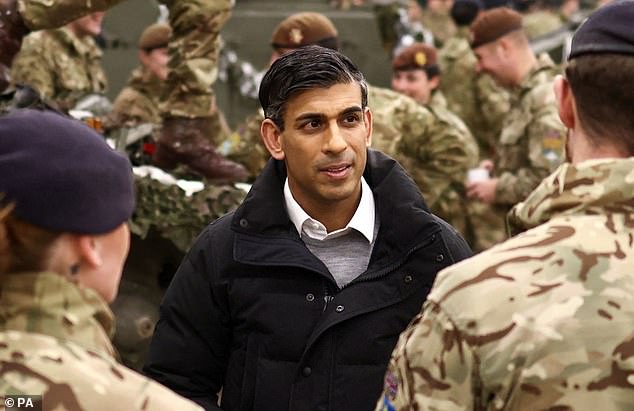 Prime Minister Rishi Sunak talks with NATO troops at the Tapa military base, in Tapa, Estonia

In an interview with the Mail, the PM flatly rejected reports that he is preparing to climb down in the trial of strength with union leaders.

He said he is ‘incredibly disappointed’ by the industrial action threatening to paralyse key services, ‘particularly at Christmas, particularly when it impacts people’s health’.

And the Prime Minister warned striking paramedics not to follow through with their threat to refuse help for those in distress during Wednesday’s walk out, including any elderly who suffer a fall.

Calling on the unions to abandon the strikes, Mr Sunak added: ‘I really urge the unions to consider the impact these strikes are having on people’s lives and their health and to consider whether that’s really appropriate.’

He says the Government cannot afford to risk prolonging inflation by giving in to unaffordable pay demands, like the 19 per cent hike sought by nurses who are due to strike again tomorrow.

Brits have been warned to brace for one of the worst Christmas getaways ever as strikes coincide with the festive rush to cause travel chaos.

The AA is predicting widespread disruption on the roads, with 20million car trips set to take place in the run-up to Christmas Day amid walkouts on the railways.

On Monday, National Rail boss Andrew Haines slammed the RMT union for causing ‘needless misery’ to travellers and urged the militant union to agree a deal.

Meanwhile, British Airways and Virgin Atlantic have agreed to limit ticket sales for UK-bound flights to Heathrow Airport due to walkouts by Border Force agents.

‘Chaotic’ scenes have already been reported at the UK’s biggest airport, with some passengers complaining of waiting two hours to collect their bags this morning. 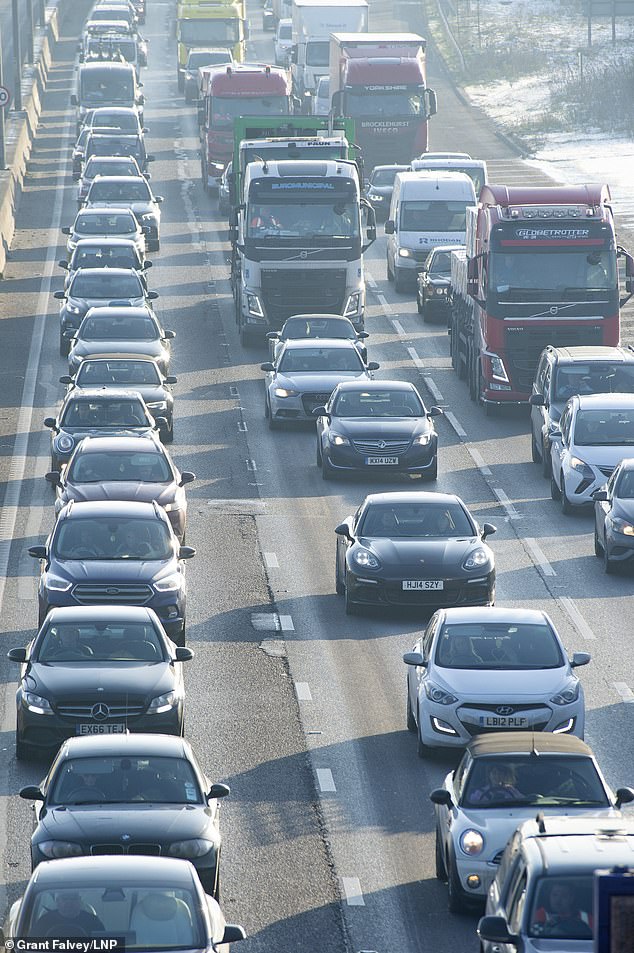 The AA is predicting widespread disruption on the roads, with 20million car trips set to take place in the run-up to Christmas Day. Pictured: The M25 in Dartford 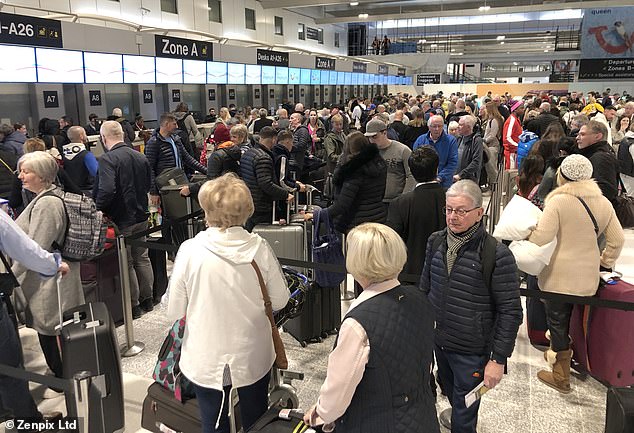 Around five million UK holidaymakers are expected to take a foreign trip over the Christmas and New Year period. Pictured: Manchester Airport this morning

BA and Virgin agreed to stop ticket sales for inbound flights on Border Force strike days after discussions with the government agency and Heathrow, MailOnline reported.

On Monday evening, passengers flying on BA from the United States were faced with hours of delays following technical difficulties.

‘Our flights due to depart the USA tonight are currently delayed due to a technical issue with our third-party flight planning supplier, which we are urgently investigating,’ the airline said in a statement.

An airline spokesperson said the issue does not affect flights that have departed already and is not a safety issue.