Home » World News » Nancy Pelosi, 82, STEPS DOWN as leader of the Democrats after 29 years 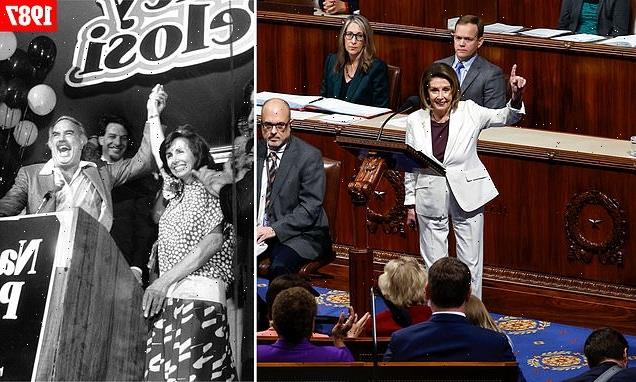 Nancy Pelosi, 82, STEPS DOWN as leader of the Democrats after 29 years

BREAKING NEWS: Nancy Pelosi, 82, STEPS DOWN as leader of the Democrats after 19 years: Congresswoman who was elected in 1987 says a ‘new generation’ is needed, pays tribute to husband Paul after attack and snubs Trump in House speech

Speaker Nancy Pelosi announced on Thursday she will not seek re-election to Democratic leadership next year although she will stay on as a member of Congress.

‘My friends, no matter what title you all, my colleagues, have bestowed upon me, speaker, leader, whip, there is no greater official honor for me than to stand on this floor and to speak for the people of San Francisco,’ she said in a speech on the House floor.

‘This I will continue to do as a member of the House, speaking for the people of San Francisco, serving the great state of California, and defending our constitution. And with great confidence in our caucus, I will not seek re-election to democratic leadership in the next Congress.’

Democrats were eagerly awaiting news of Pelosi’s future, which comes in the wake of Republicans taking the majority in the House and her husband Paul recovering from being attacked by a hamme.

There had been talk Pelosi, 82, would Congress in a sort of emeritus role that would give her an advisor status – both to Democrats in the House and to President Joe Biden – but would step down from formal leadership, allowing a younger generation of lawmakers to take charge.

‘For me the hour’s come for a new generation to lead the democratic caucus that I so deeply respect. And I am grateful that so many are ready and willing to shoulder this awesome responsibility,’ she said.

Pelosi also mentioned that, during her time as speaker, she had worked with three presidents: George W. Bush, Barack Obama and Joe Biden. She notably left out Donald Trump, with whom she had an antagonistic relationship.

After she spoke, she was swarmed by Democrats on the House floor, who gave her hugs and kissed her cheek. California Democratic Rep. Eric Swawell brought his young daughter to see Pelosi, who gave the little girl a big hug.

Senate Democratic Leader Chuck Schumer was among those congratulating Pelosi. The Democratic side of the House was filled to the brim with lawmakers and staff. The Republican side was notably empty with less than a dozen seats filled. The GOP’s Number Two leader, Steve Scalise, was there and gave her a standing ovation. There was no sight of the Republicans’ top leader, Kevin McCarthy.

In her remarks, Pelosi thanked her family and particularly mentioned her husband, who is recovering in San Francisco.

‘For my dear husband Paul, who has been my beloved partner in life and my pillar of support, we’re all grateful for all the prayers that well wishes as he continues his recovery. Thank you so much,’ she said.

Pelosi received a standing ovation from House Democrats when she entered the chamber. Members of her party packed the seats into the aisles, whooping and cheering as she took the rostrum. 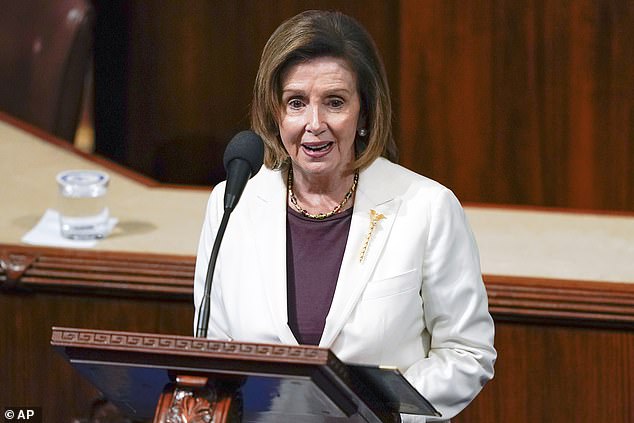 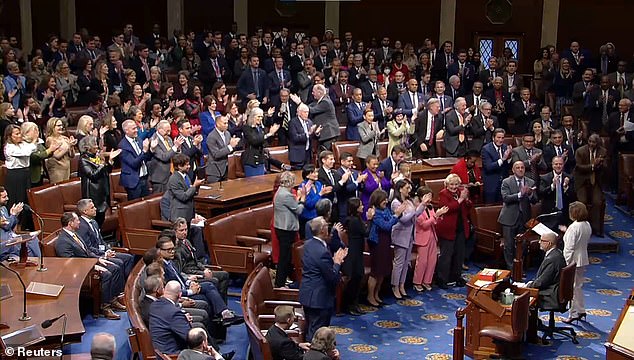 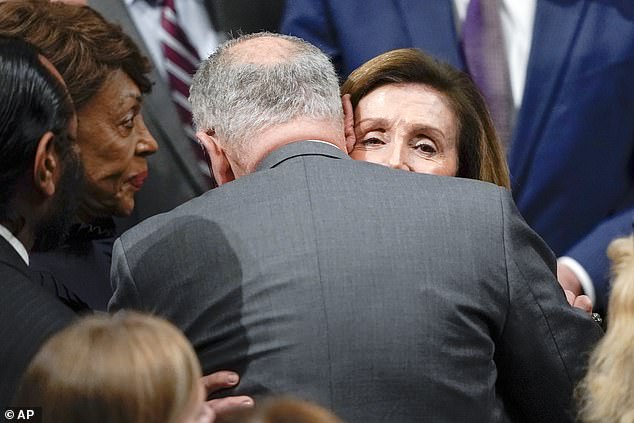 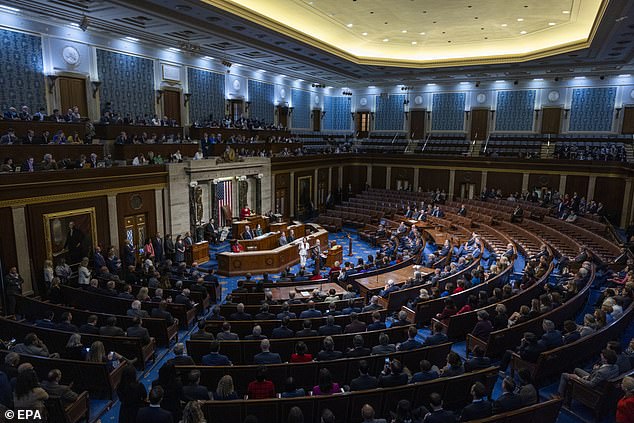 First elected by Democrats as their leader in 2003, she as served at the top of the leadership since then – for a total of 29 years.

In her remarks, Pelosi described how she saw the Capitol for the first time when she was six years old, when her father was elected to Congress.

She also referred to the January 6th insurrection at the Capitol, tying it to last last week’s midterm election, when Republicans won the House majority but Democrats prevented a red wave election.

‘American democracy is majestic. But it is fragile. Many of us here have witnessed its fragility firsthand, tragically in this chamber,’ Pelosi said.

‘Last week the American people spoke, and their voices were raised in defense of liberty, of the rule of law, and of democracy itself. With these elections the people stood in the breach and repelled the assault on democracy. They resoundingly rejected violence and insurrection. And in doing so gave proof through the night that our flag was still there,’ she said.

Democrats gave her a standing ovation.

When Pelosi arrived at the Capitol on Thursday morning, she gave no indication of her decision.

Wearing a white suit – the color of suffragettes – Pelosi smiled as she walked into the speaker’s office but didn’t answer questions.

President Joe Biden spoke with Pelosi Thursday morning and ‘congratulated her on her historic tenure as Speaker of the House,’ the White House said.

Pelosi, four years ago, pledged not to seek to lead her party past January 2023. But she is unlikely to leave Congress just weeks after voters in her district elected her to another two-year term.

Now the race to replace her in leadership has begun.

Pelosi’s longtime lieutenant Majority Leader Steny Hoyer of Maryland, after Pelosi’s remarks on Thursday, also announced he would not seek a leadership position next year.

‘I believe that it is time for me, however, to continue my service in a different role. Therefore, I have decided not to seek elected leadership in the 118th Congress,’ he said in a statement.

New York Representative Hakeem Jeffries, the chair of the House Democratic caucus, is expected to run for the top job.

Hoyer threw his support to Jeffries.

‘I look forward to serving as a resource to him, to the rest of our Democratic leadership team, and to our entire caucus in whatever capacity I can best be of assistance as we move forward together to address the nation’s challenges,’ he said.

Jeffries, 52, is a leader among the next generation of lawmakers, who have been pushing for the older generation to step aside to make room for a new crop of leaders.

He refused to talk about his next steps on Thursday morning. He came out of a meeting of party leadership, which Pelosi did not attend, saying he looked forward to hearing from her on her next steps.

Democrats are set to hold party leadership elections on November 30 to pick the lawmakers that will lead their party when the new Congress convenes in January. 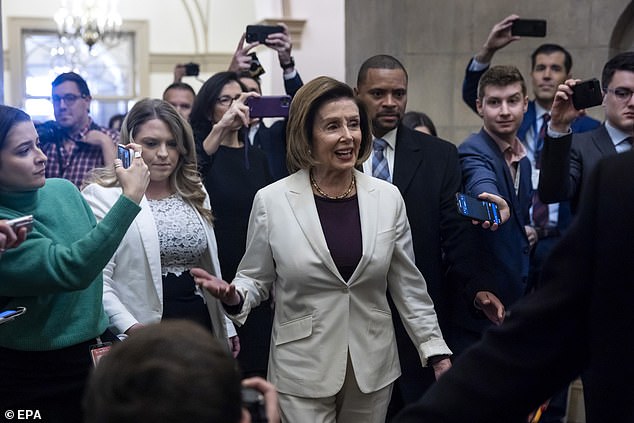 Speaker Nancy Pelosi arrives in the Capitol on Thursday morning, giving no hints as to her decision about her future 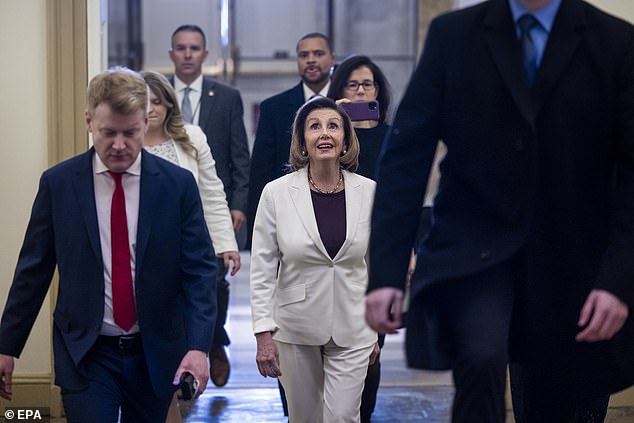 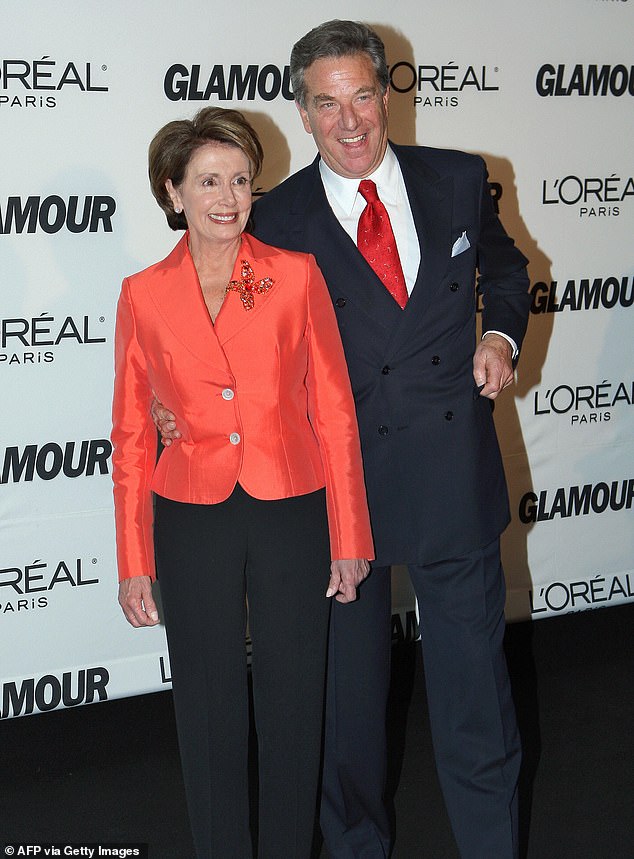 Nancy Pelosi and her husband Paul at a 2007 event in New York City, Paul Pelosi is recovering from a brutal attack 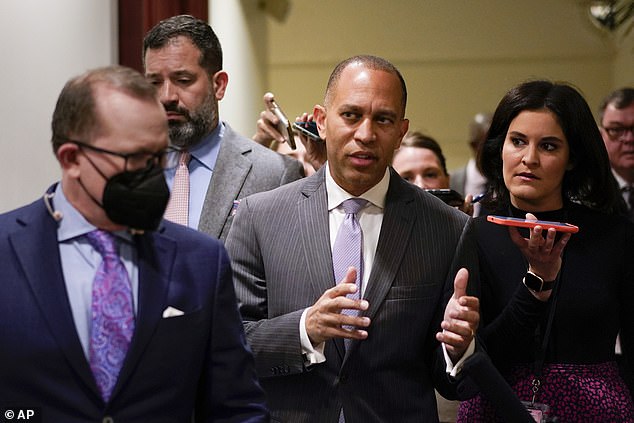 New York Representative Hakeem Jeffries, the chair of the House Democratic caucus, is expected to run for leader if Pelosi steps down 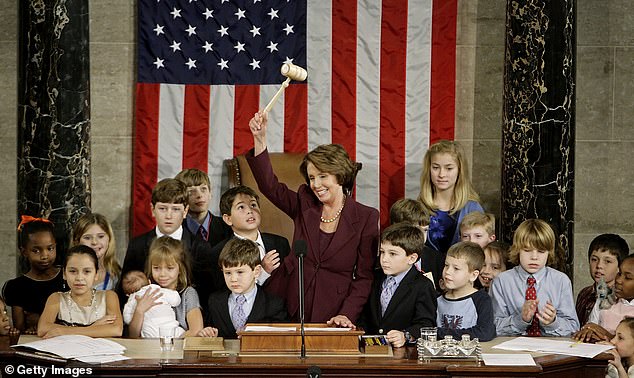 Nancy Pelosi first became speaker of the House in 2007, she’s shown above after her swearing in, surrounded by her grandchildren and the children of other members of Congress 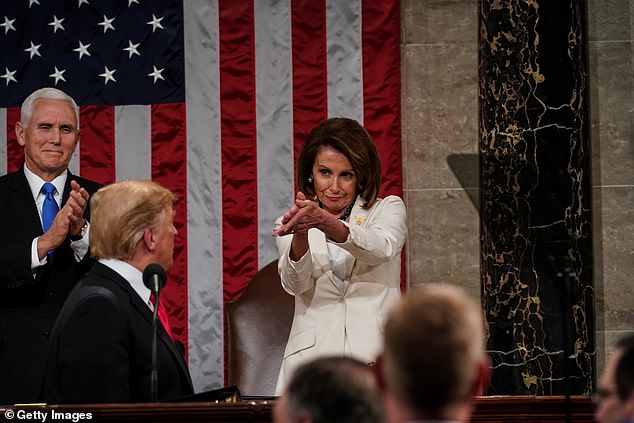 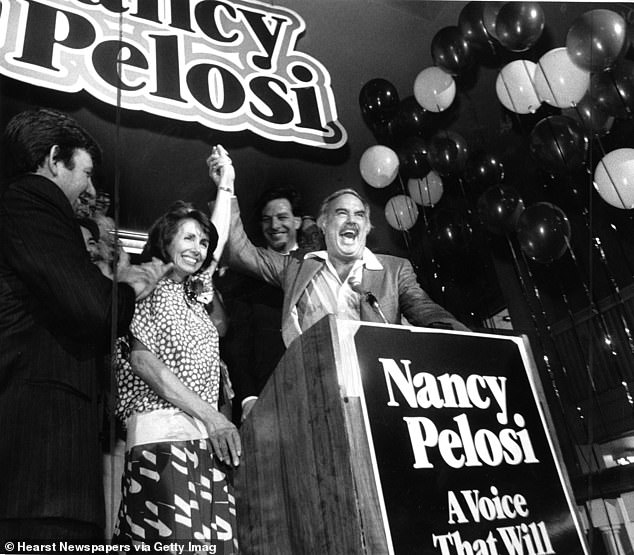 Nancy Pelosi in 1987, the night she won a special election to Congress

Pelosi has been a towering figure in American history and was, at one point, the most powerful woman in the government.

She was once describing as ruling House Democrats with an iron fist inside a velvet glove. She has stayed in power through Democratic victories and defeats, surviving Donald Trump’s presidency and calls from her own party for a new generation of leadership.

Her fundraising prowess (she has raised over $1 billion for Democrats), her tireless campaigning and her personal relationships with her members kept her in the top spot.

Nancy D’Alesandro Pelosi was born in Baltimore on March 26, 1940. Her father, Thomas D’Alesandro, was a Democratic congressman from Maryland who became mayor of Baltimore.

She grew up in politics, learning campaigning from her father, and attended John F. Kennedy’s inauguration.

She met Paul Pelosi in college. They married after school and eventually settled in San Francisco. She worked in California state politics, eventually becoming the head of the state party.

When Rep. Phillip Burton, who represented San Francisco, died in 1983, his wife Sala replaced him in Congress. But she died a few years later and picked Pelosi as her designated successor.

Pelosi won that 1987 special election and has been re-elected easily ever since.

She worked her way up House leadership and became speaker in 2007, the first woman to hold the role. She served in it through George W. Bush’s presidency and the first few years of Barack Obama’s.

She is credited with helping Obama pass the Affordable HealthCare Act. But Democrats then lost control of the House in the 2010 election, making Pelosi minority leader.

When Democrats won the House majority again in 2018, Pelosi returned to the speakership.

She became a bete noir to then President Donald Trump. She did not shy away from challenging him, especially during delicate negotiations over legislation.

She famously ripped up his 2020 State of the Union speech to Congress, in a public display of disgust with that address, as she sat behind him on the House podium.

And she oversaw two impeachments of him on the House floor.  He was acquitted by the Senate on both ocassions.

She was overseeing the counting of the electoral college vote on January 6th when her security rushed her out of the Capitol building as Trump’s MAGA supporters stormed the building. 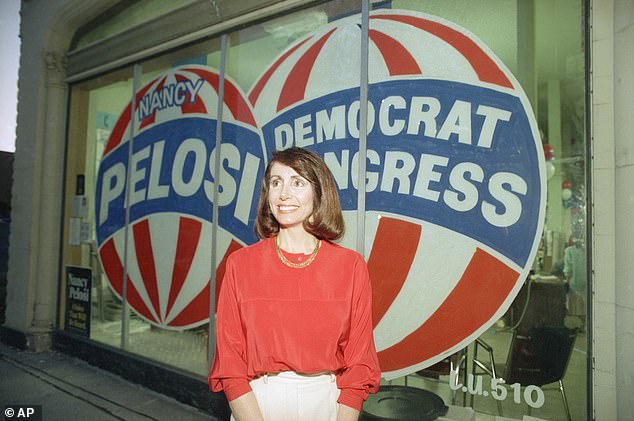 Nancy Pelosi in 1987, when she first ran for Congress 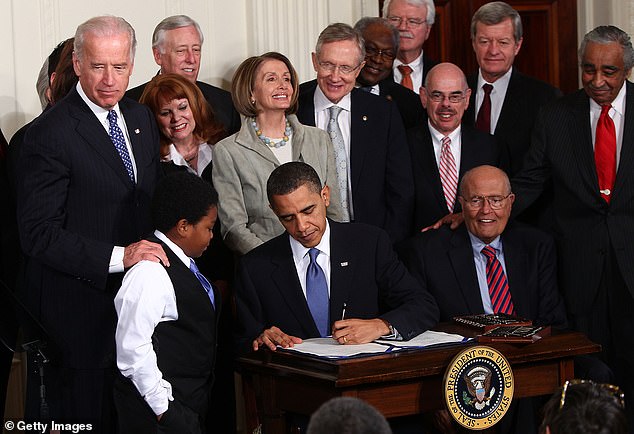 Pelosi helped pass the Affordable Care Act, she’s seen at the White House in March 2010, when then-President Obama signed it into law 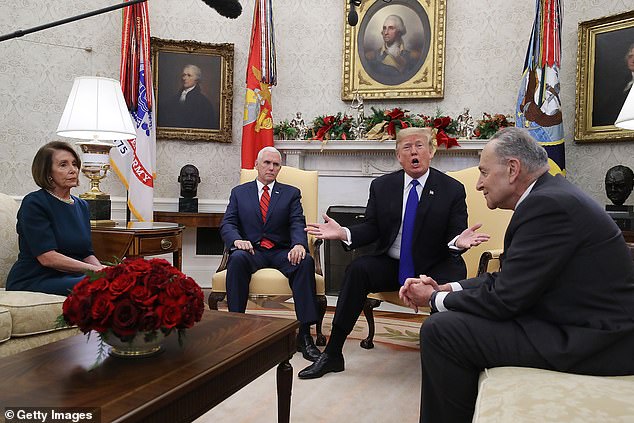 Nancy Pelosi had an antagonistic relationship with President Donald Trump, above she’s seen in the Oval Office with him, Vice President Mike Pence and Senate Leader Chuck Schumer in December 2018 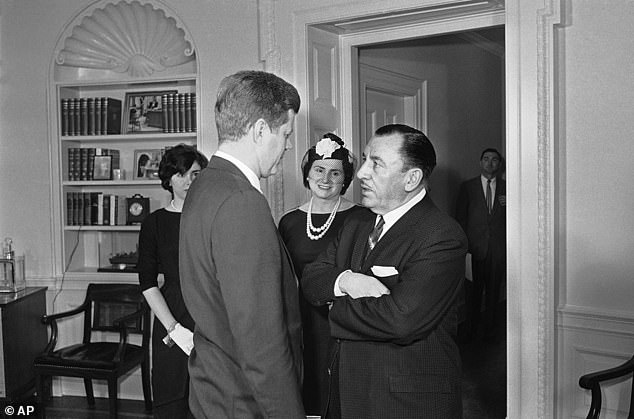 Nancy Pelosi can be seen at left in this 1961 photo of her father, Thomas D’Alesandro Jr., speaking with President John F. Kennedy after taking the oath to become a member of the Federal Renegotiation Board

She has enjoyed a resurgence of acclaim as the House committee investigating the insurrection showed footage of her that day.

She was hidden in a secure location with the rest of Congressional leadership and working the phones to demand backup for Capitol Police and help securing the Capitol. At one point she opened a pack of jerkey with her teeth, talking and eating at the same time.

She also spoke with then-Vice President Mike Pence, asking him about his safety.

Once the Capitol was secure, she and Pence returned to the House floor to oversee the certification of Joe Biden’s presidential victory.

Along with her rise in national prominence, Pelosi became a boogey man for Republicans. They bashed her as the liberal from San Francisco, using her to raise funds and to campaign against.