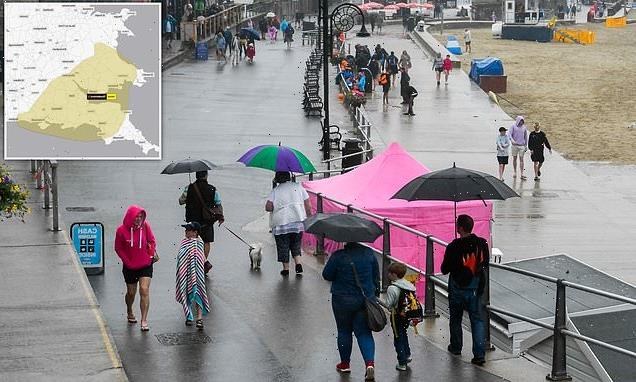 And now for the THUNDERSTORMS! Met Office issues deluge warning for today with more rain over the weekend… following UK’s hottest day on record

Parts of Britain are set to be lashed by ‘very intense’ thunderstorms today, as the UK’s week of tumultuous weather continues.

A 12-hour yellow warning for stormy weather issued by the Met Office yesterday remains in place for the south-west of England and southern Wales, lasting from 10am until 10pm.

Up to 2inches of rain could fall in as little as two to three hours, with local flooding and spray on the roads possible.

Forecasters have also warned of ‘hail and frequent lightning’, leading to possible train and bus cancellations and also power cuts.

Showers are also expected to spread across the Midlands and into parts of Northern England and southern Scotland today, before the rain fades in the evening.

Whilst the outlook improves for the weekend, with temperatures expected to rise beyond 25C (75F) in the south on Saturday, more heavy rain is expected to fall in Northern Ireland, before spreading to western Scotland.

An area of high pressure is then expected to bring more warm and sunny weather across parts of East Anglia and the South-East on Sunday, with temperatures possibly reaching 30C (86F).

It continues an extraordinary week of weather that saw the UK record a new all-time high of 40.3C (104.5F) at Coningsby in Lincolnshire on Tuesday, beating the previous record set in Cambridge in 2019 of 38.7C (101.7F). 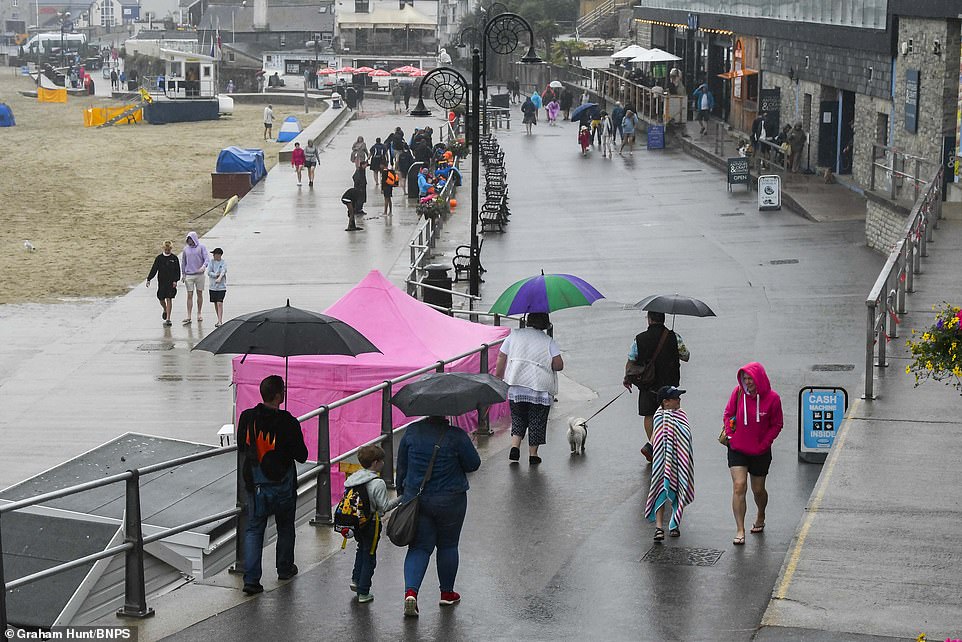 Parts of Britain are set to be lashed by ‘very intense’ thunderstorms today, as the UK’s week of tumultuous weather continues. Above: Residents in Lyme Regis, Dorset, hold umbrellas as it rains on Wednesday 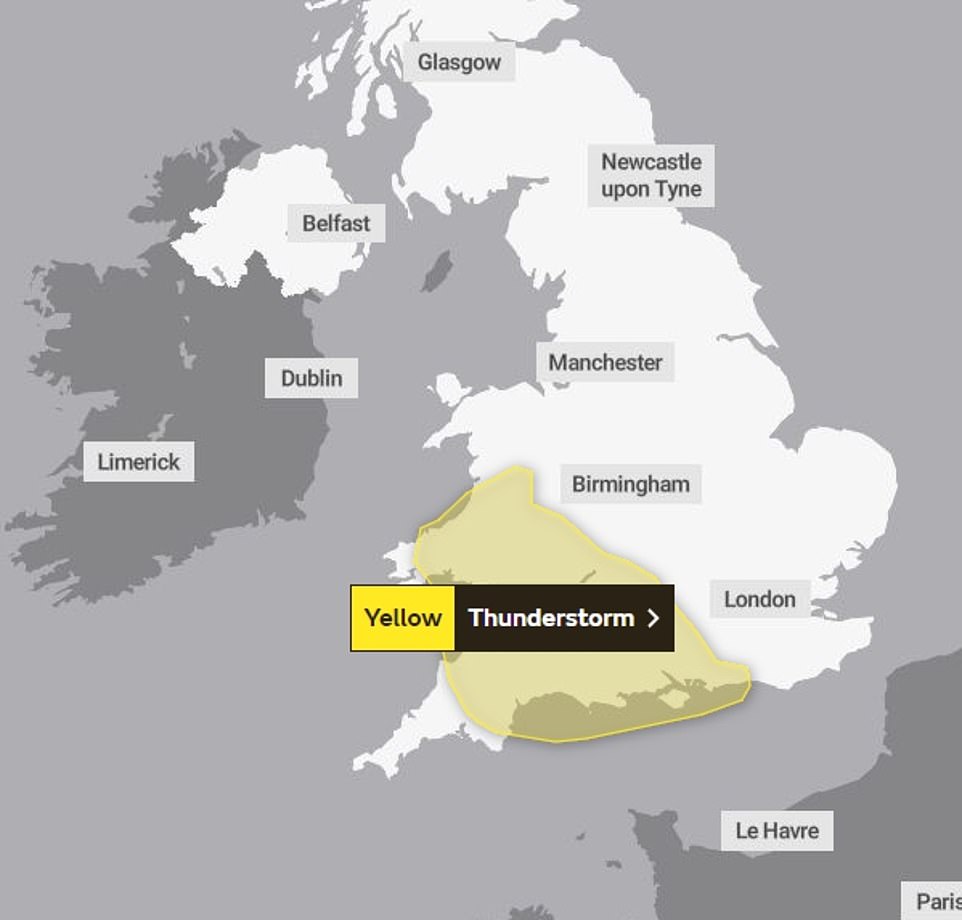 A 12-hour yellow warning for stormy weather issued by the Met Office yesterday remains in place for the south-west of England and southern Wales, lasting from 10am until 10pm 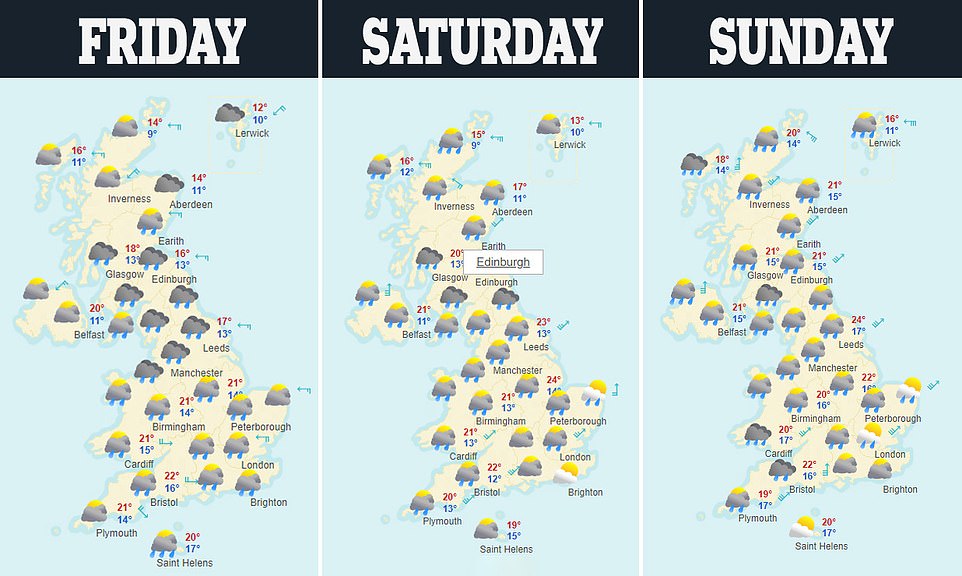 A hosepipe ban could soon be introduced for the first time in 10 years in Britain following spike in demand during the 40.3C heatwave.

Southern Water has warned water levels in the River Test in Hampshire – a vital source for the area – are well below what is normal for this time of year as record temperatures are seen in the UK after a dry winter and spring.

To cope, it has applied to the Environment Agency for a drought permit and if granted one will potentially impose a hosepipe ban on an estimated 300,000 homes in Southampton and the Isle of Wight which would hit around 700,000 people.

The company said water flows in Hampshire fell from 2,500million litres a day in March to 500million now as it’s claimed by the Sun other suppliers in the UK are looking at also introducing hosepipe bans after low water levels were seen elsewhere.

For much of the country today, it is expected to be cloudy, with some sunshine expected on the west coast of Scotland, parts of south-west Wales and south-west England.

However, what Met Officer forecaster Alex Deakin described as ‘tasty’ thunderstorms are then expected to develop in the south-west of England.

Mr Deakin said: ‘We are a bit concerned that we could see some very intense thunderstorms. Not everywhere in our yellow warning area will see those downpours.

‘Some may stay completely dry but where they do occur they could cause some disruption. A lot of raining falling in a short space of time. Local flooding is possible. And certainly a lot of spray and surface water on the roads.’

He said the M5 and M4 could see disruption, with thundery showers continuing into the evening. Temperatures in the south will get into the low or mid-20s Celsius (70-77F).

Showers will continue in many areas during this evening, which those travelling for the weekend should be wary of.

Whilst the rain is expected to fade away for most of the country tomorrow, Northern Ireland will then experience wet weather.

Mr Deakin added: ‘Much of southern England, the Midlands, eastern England will stay dry and fine through Saturday. It may turn a little breezy in places but actually turning warmer here as well.

‘In the sunshine temperatures back into the mid, possibly even high twenties, whereas it is cooler with the cloudier, windier, wetter weather further West.

‘And will continue to trickle its way in across parts of the country during Saturday evening and into Sunday as well.

‘Part of a big area of low pressure. It is steadily moving in but high pressure is still controlling things further east and that will continue to bring some warm, sunny weather across parts of East Anglia and the South-East.

‘We could be back up over 30 Celsius across that southeastern corner on sunday, whereas elsewhere it will be cooler with stronger winds and further outbreaks of rain.’ 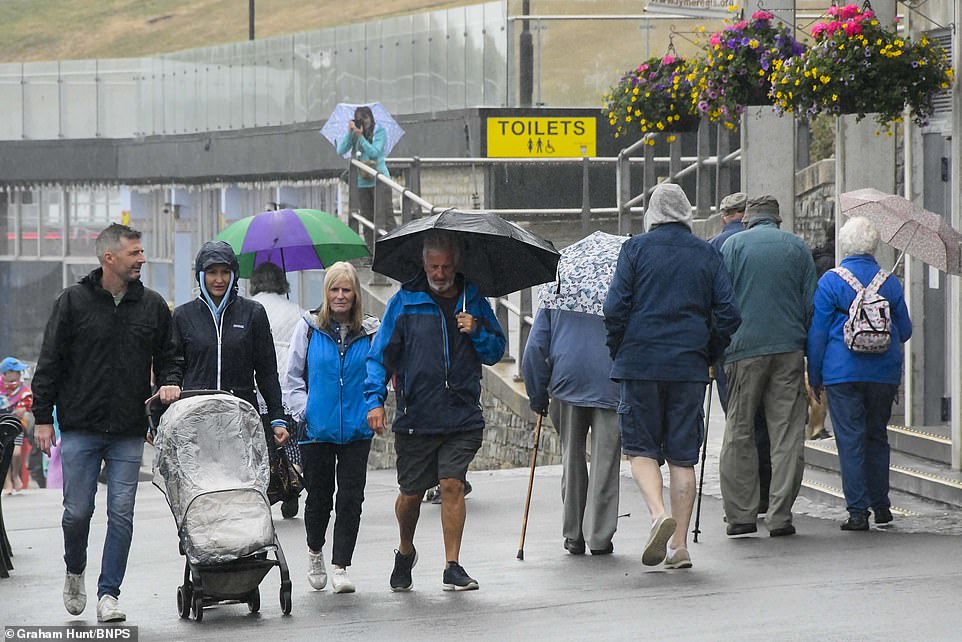 A very wet day on the Dorset coast at Lyme Regis on Wednesday, one day after record-breaking heat brought people to the beach 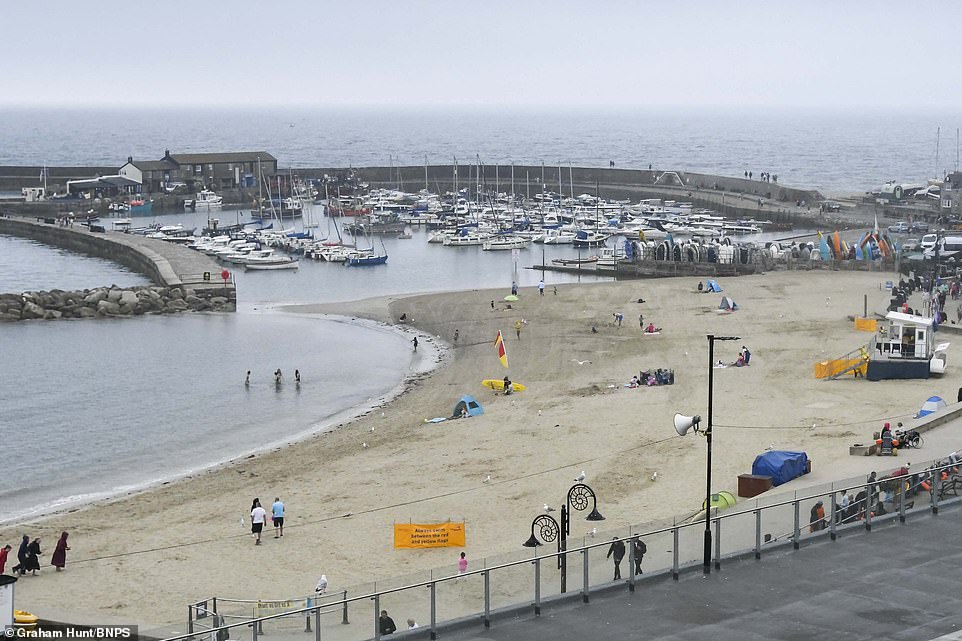 It comes after homeowners earlier this week told how they had to grab their beloved pets and flee their homes as they were decimated by a fire that is believed to have been sparked by a compost heap that spontaneously combusted.

Two rows of terraced houses, four other homes, 12 stables and five cars were destroyed by the inferno in Wennington, near the Dartford Crossing east of London.

A local councillor said as many as 19 homes could have been destroyed.

Terrified residents were ordered out as 100 firefighters tried to halt a lethal wall of flame spreading from home to home, fanned by warm winds. One firefighter at the scene branded it ‘absolute hell’.

One of the worst scenes aside from Wennington was in Dagenham, east London, where video shows an almost post-apocalyptic scene following a blaze which has destroyed a number of properties.

The London fire brigade said Tuesday was their busiest day since the end of the Second World War, with at least 110 fire trucks sent to blazes across the capital.