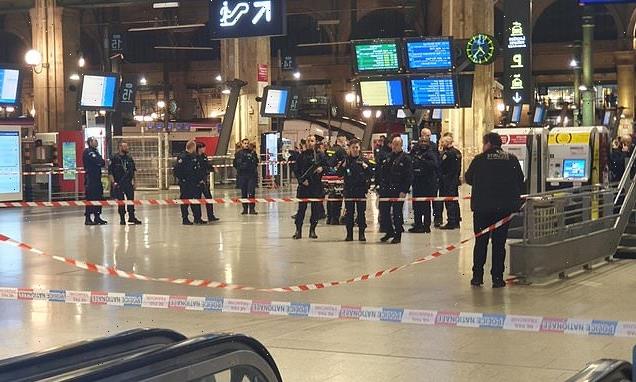 A knifeman has attacked and wounded several passengers at the Gare du Nord station in Paris.

The ‘indiscriminate’ frenzy, which was carried out with a homemade blade, started at 6.40am local time inside Europe’s busiest railway station.

A police officer who was returning home at the end of his shift shot the attacker and ‘neutralised’ him and placed him under arrest. The motive is not yet clear.

Six people are believed to have been injured in the rampage, including a border police officer. 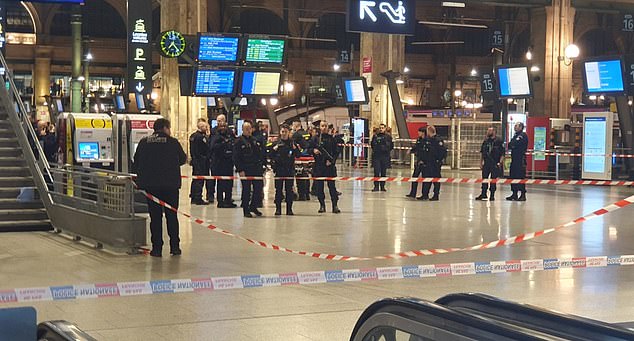 A knifeman has attacked and wounded several passengers at the Gare du Nord station in Paris. Pictured: police at the scene

Minister of the Interior, Gerald Darmanin, said this morning: ‘An individual has injured several people this morning in Gare du Nord.

‘He was quickly neutralised. Thanks to security forces for their effective and courageous reaction.’

The incident has cased major delays to trains at the station in the early morning rush, according to the live departure board of operator SNCF.

Rail network TER Hauts-de-France said in a statement: ‘Traffic is disrupted on departure and arrival from Paris Nord.

‘The police have opened fire against a threatening person who is said to have injured customers in Gare du Nord.

‘The person was brought under control, the emergency services intervened and the person evacuated.

‘A security perimeter has been established but the station continues to operate normally.’

France remains on a state of heightened security alert after a spate of deadly attacks since 2015.