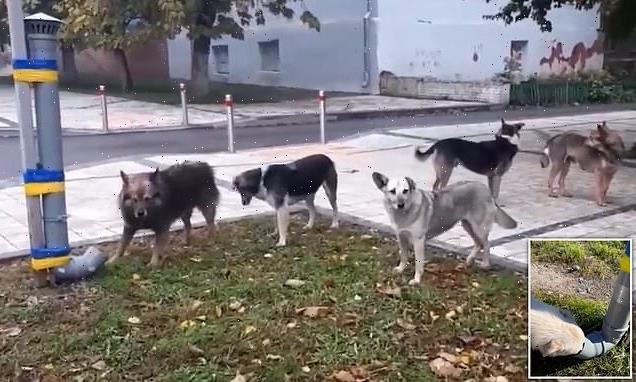 Homeless dogs of Ukraine patiently line up for food near frontline

Lifeline for the homeless dogs of Ukraine: Pets left on the streets because of Putin’s invasion of Ukraine patiently line up for food being handed out by charity

Watch as hungry Ukrainian dogs in Donetsk queue up for tasty treats after volunteers installed a dog food dispenser in newly liberated territory.

Dog lovers haven’t had much to celebrate lately when watching the news coming out of the frontline, but it’s not all doom and gloom in Ukraine.

‘I’ve never seen anything like this. Yesterday we installed a displaced pet feeding station in Kramatorsk (with your support!),’ he said. ‘This morning, the Ukrainian dogs waited in line to eat.’

The dogs can be seen politely waiting their turn to eat, remembering their manners in spite of their ordeal on the frontline.

‘No pushing and crowding. No fighting. Everyone just waiting politely their turn,’ observed one social media user. 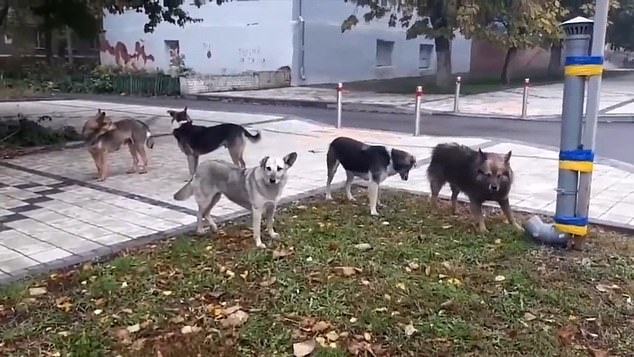 Hungry yet polite: Dogs queue up for their free meal in the Ukrainian city of Kramatorsk 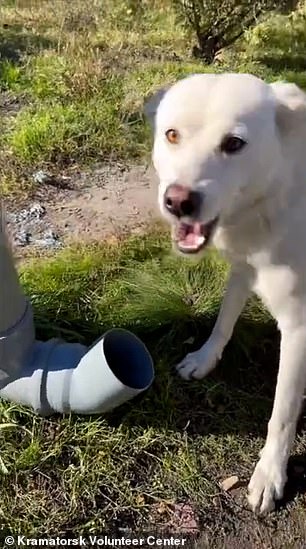 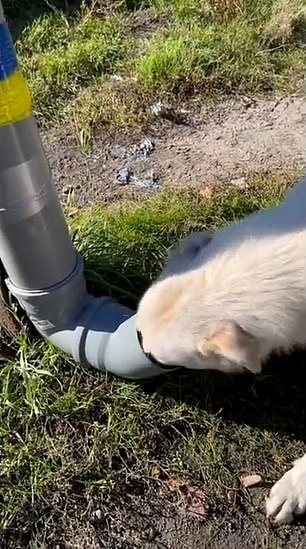 The dogs can be seen politely waiting their turn to eat, remembering their manners in spite of their ordeal on the frontline 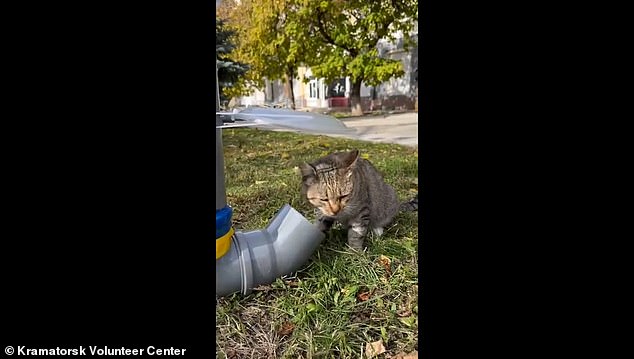 Cats also took advantage of the feeder, appreciating the food left out by the good Samaritans

Dogs weren’t the only animals to take advantage of the feeder, with local cats also dropping in for a free meal.

But Mook doesn’t limit his altruism to household pets. He’s also been snapped building a shelter for racoons in the war-torn country.

‘We’ve seen a huge need for support for the animals,’ Mook told The Dodo. ‘Dogs and cats who used to have homes.’

He has set up a PayPal link to help house animals affected by the war in Ukraine.

Just under an hour’s drive away, Russian forces have been dashing themselves against Ukraine’s eastern frontline.

‘The key hot spots in Donbas are Soledar and Bakhmut,’ president Zelenskiy said in his nightly video address. ‘Very heavy fighting is going on there.’

The town of Bakhmut has been the next target of Russia’s armed forces in their slow advance through the Donetsk region since taking the key industrial towns of Lysychansk and Sievierodonetsk in June and July. Soledar lies just to the north of Bakhmut.