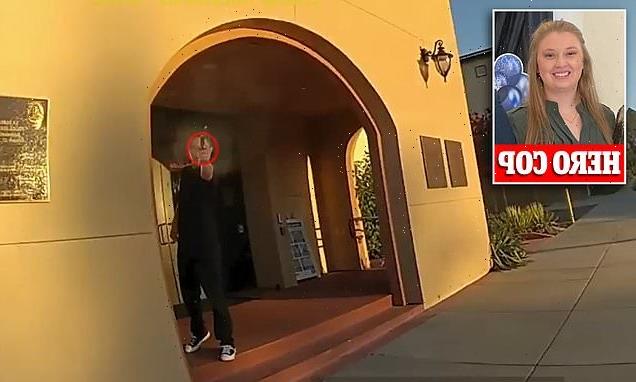 Gunman fires at California officer before being shot and killed

California prosecutors have released shocking bodycam footage of the moment a police officer was shot twice, before his heroic partner shot the gunman in the head and killed him.

The video opens with La Habra Police officers Mark Milward and partner Abigail Fox arriving at their LA headquarters to assist a woman allegedly being stalked by 22-year-old Matthew-Tuan Ahn Tran on August 6, 2021.

After speaking with Tran, Milward walks to his car, but turns back when he hears his partner yelling at the suspect, only to find Tran pointing a gun at him.

Tran fires twice, and one of the bullets pierces Milward’s body armor. He tumbles back in pain, dropping his own handgun before struggling to open his phone.

Fox immediately fires five shots at the gunman, striking him in the head, then rushes to Milward’s side. 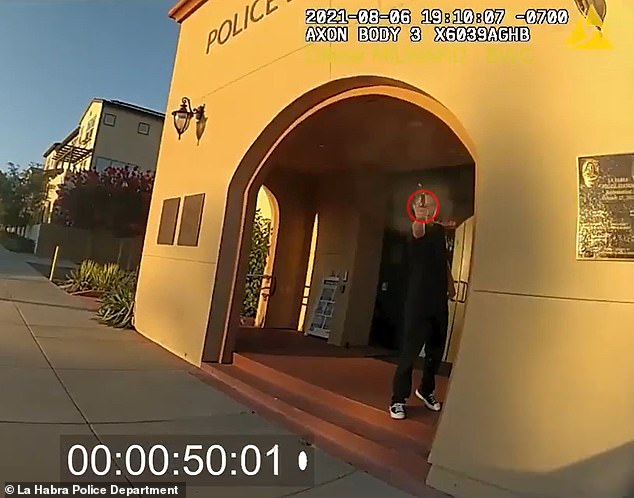 Investigators ultimately determined that Fox was justified in using deadly force against Tran, who was revealed to have THC and methamphetamine in his system during the encounter, according to an autopsy report.

The Orange County District Attorney’s Office had opened an investigation into the incident, which is required during any officer-related shooting, and found ‘no evidence of criminal culpability’ against Fox.

The incident began at around 6.25pm, when a woman called 911 about a 1998 Toyota Camry tailgating her on 57 Freeway, following her no matter where she turned, the LA Times reports.

Dispatchers advised the woman to pull into the La Habra Police headquarters for safety, as Fox and Milward were sent out to the scene at 7.10pm.

‘What’s going on here?’ Milward can be heard asking Tran after arriving at the scene and approaching him. 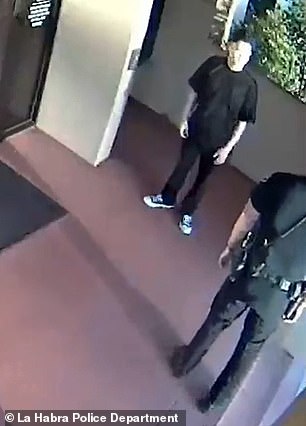 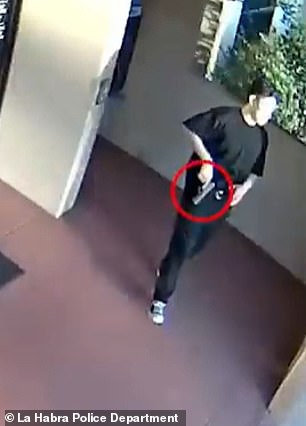 Milward and his partner were responding to a call from a woman who was allegedly being stalked by Tran. After speaking to Tran (left) Milward turns his back, and the suspect immediately pulls out a gun (right) and fires at the officer 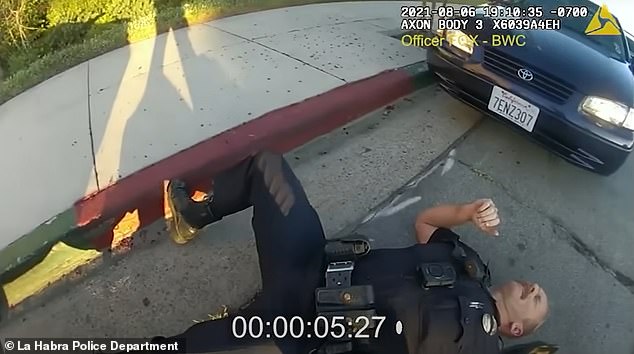 Milward falls to the ground after a bullet pierces his armor 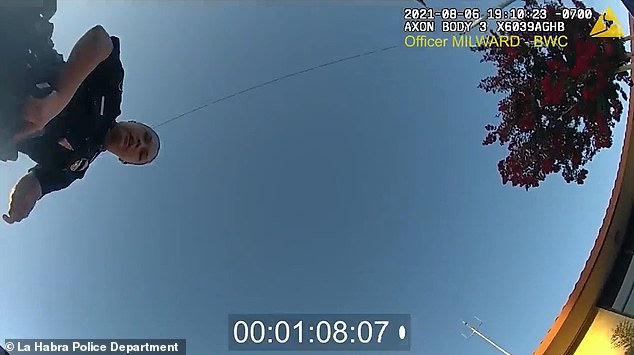 His partner, Abigail Fox (pictured) shoots the gunman dead and rushes to check on the downed officer

Milward asks the 22-year-old if he has anything to do with the two cars parked outside the police HQ, belonging to the woman and her alleged stalker.

Tran says he does not, and when Milward tells him that he’ll be with him in a second, surveillance footage shows the suspect immediately taking out a handgun and firing at the officer.

Milward, who joined the police department in 2019, was taken to hospital following the deadly shoot out, but was released the following week to cheers and applause for his quick recovery.

He and Fox have been touted as local heroes, with the latter praised for her quick action in taking down the gunman who shot her partner.

The autopsy report, which was released in August, found that, of the five shots Fox fired, three hit Tran in the head, body and right thigh.

After the shoutout, she could be seen rushing to her partner’s sid, attempting to comfort him as she called in the incident. 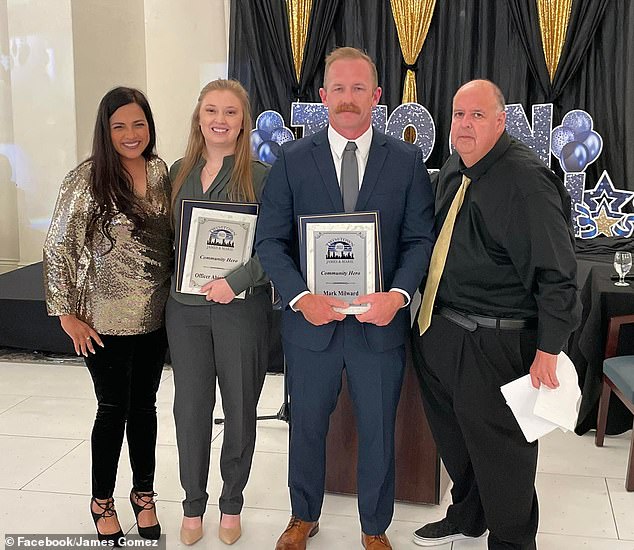 Fox and Milward (center) receive awards for their service to the local community. A probe by the DA’s office found the shooting was justified 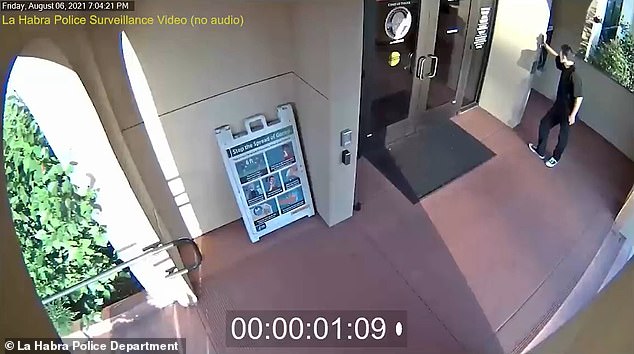 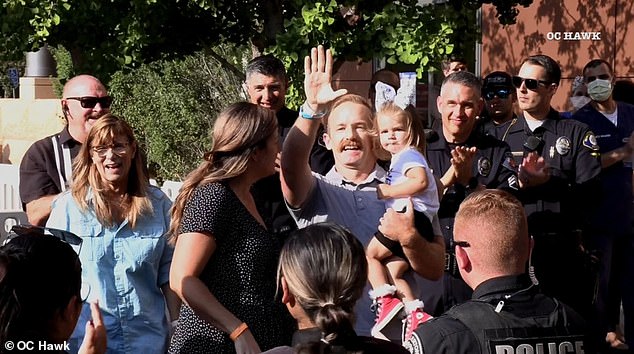 Pictured: Milward after he was released from the hospital the week after being shot 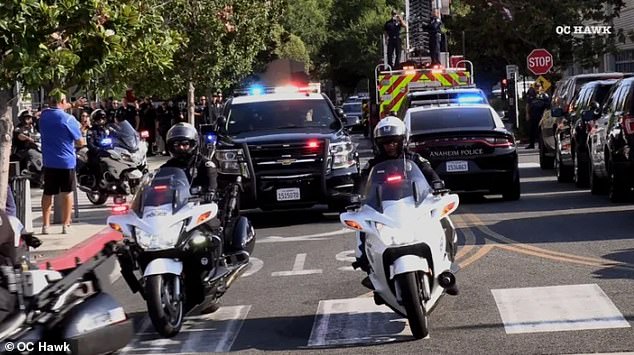 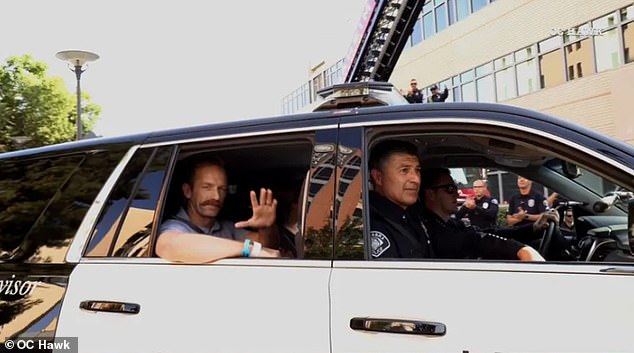