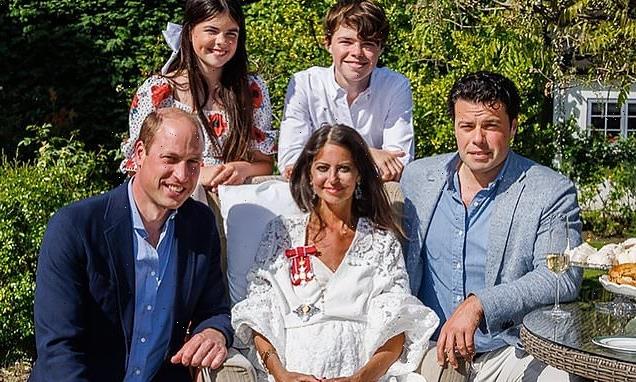 ‘A truly special person who saved lives and did so much to help others’: Friends and colleagues pay tribute to Dame Deborah James as she passes away peacefully after bowel cancer battle

Tributes have poured into Dame Deborah James after her family confirmed she has died aged 40 following a long battle with bowel cancer.

Messages commended the mother-of-two for her inspiring fundraising, her ‘tireless’ campaigning and her incredible legacy.

The podcaster and campaigner revealed in early May that she had stopped active treatment and was receiving end-of-life care at her parents’ home in Woking, with her husband Sebastien and their two children on hand.

In her final weeks, the presenter of the BBC podcast You, Me And The Big C raised millions of pounds for research and was made a dame for her ‘tireless’ work improving awareness of the disease.

Her mother Heather said her heart is ‘broken’ following the death of her daughter aged 40 from bowel cancer.

Heather James, whose handle on the social media site is Bowelgran, shared a series of photos of Dame Deborah and wrote: ‘My heart is broken. Love you forever.’ 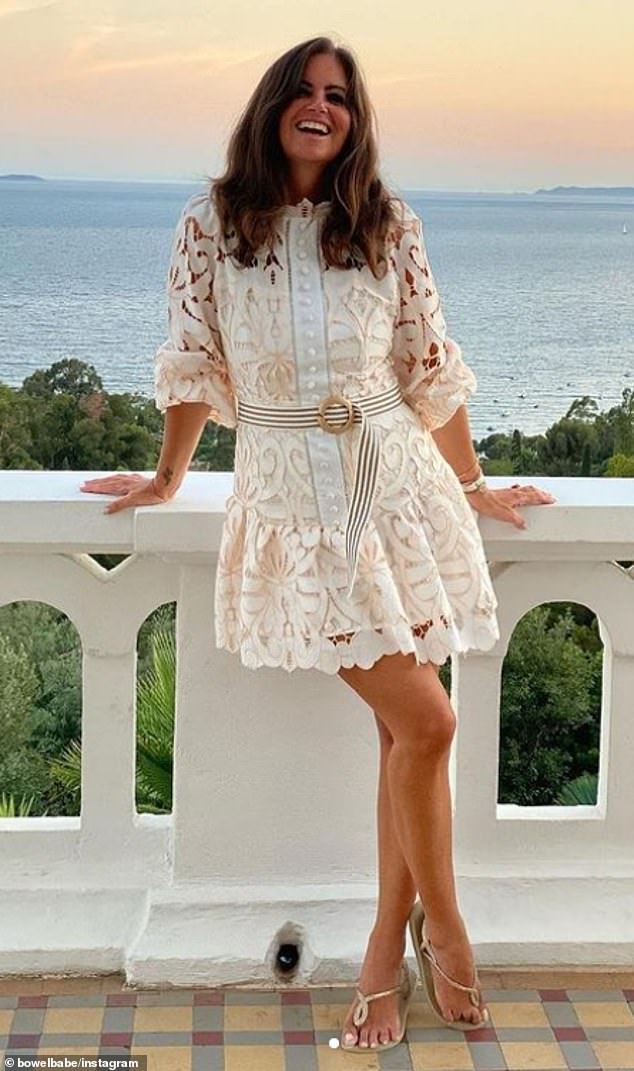 BBC podcast host Deborah James has passed away following her five-year battle with bowel cancer, her family has announced in an Instagram post, which included this above photo 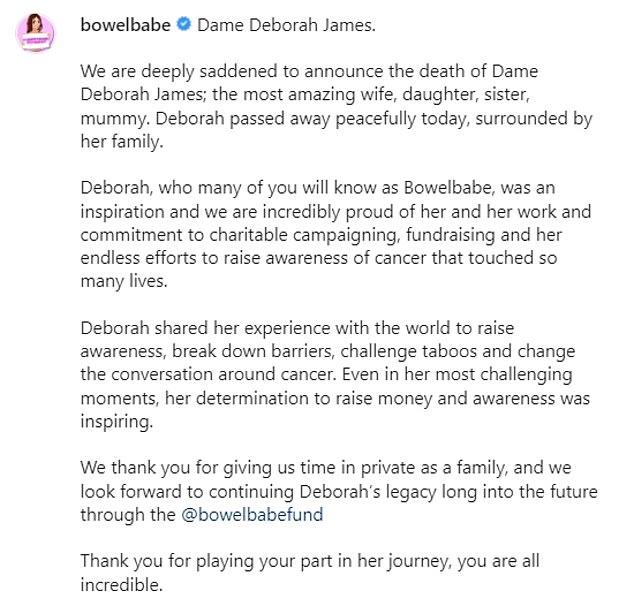 Fans, politicians and celebrities also rushed to pay their respects to the inspirational campaigner.

Minister of State Michelle Donelan tweeted: ‘RIP Deborah James – a selfless inspiration. Thoughts and prayers are with her family and friends.’

She tweeted: ‘Oh no…heartbreaking news that @bowelbabe has left us. What an inspiration, a truly special person who saved lives & did so much to help others. 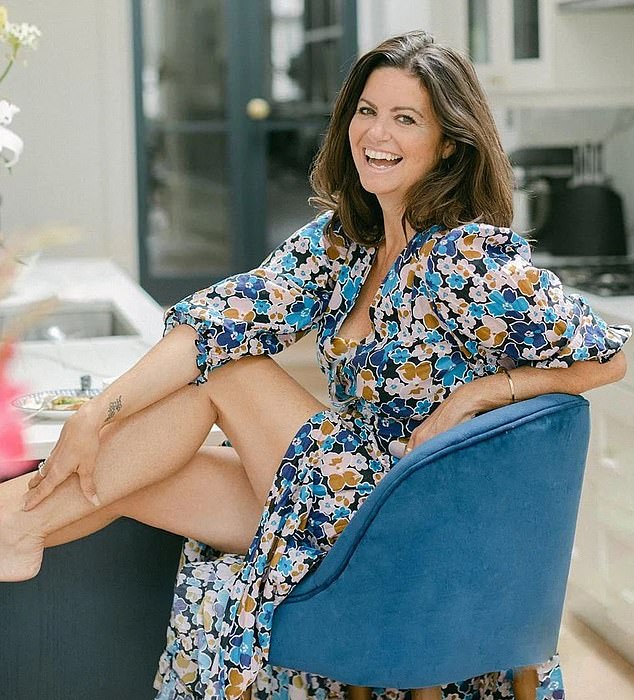 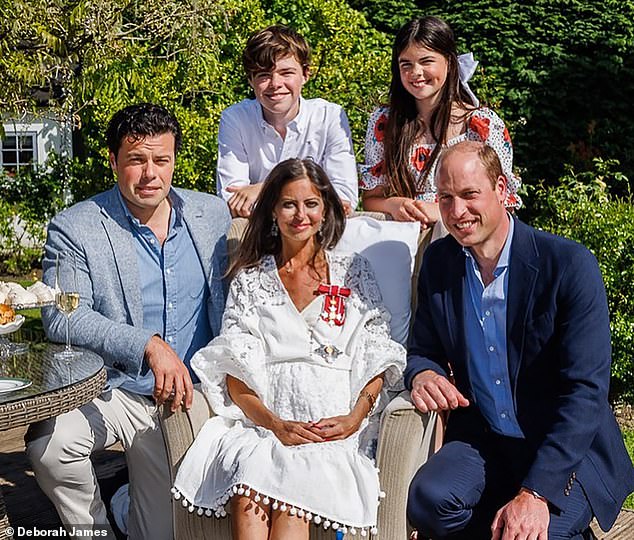 In recent weeks, she was made a dame by the Duke of Cambridge at her family home, with William praising her for ‘going above and beyond to make a very special memory’

‘Who showed that even a terminal diagnosis wasn’t going to stop her living life to the full. So much love to her family & friends.’

BBC radio presenter Chris Stark tweeted that Dame Deborah had been an inspiration for many.

‘You inspired so many and did everything to the fullest. No one can do more than that. I hope we can have a gin wherever this all leads.

‘Thinking of your family and friends and everyone that is going through similar. Rest in Peace Debs x’

She tweeted: ‘Rest in peace Deborah James. What an incredible, fierce, bright and brilliant woman. 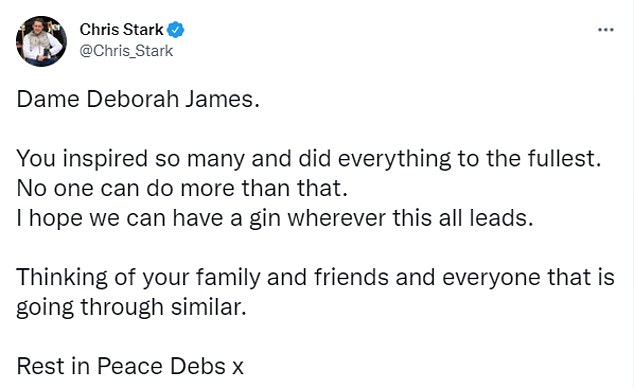 ‘An absolutely extraordinary campaigner. Thank you for your rebellious hope and the millions you have inspired @bowelbabe.

‘Thinking of your many loved ones’.

She tweeted: ‘Heartbroken that Dame Deborah James has died.

‘She has been the most incredible ambassador of life & cancer campaigner.

‘My thoughts are with her family & children. Such a huge loss. Your bright light will shine on Deborah.’

‘You will forever shine so brightly. Thank you for all you did. For the laughter, the dancing and most importantly for all you did in your short lifetime for others.

‘My love to all of the family. Just so heartbreaking’.

Genevieve Edwards, chief executive of Bowel Cancer UK, where Dame Deborah James was a patron, said the podcaster had turned her diagnosis into ‘an incredible force for good’.

She said: ‘We’re deeply saddened that our patron Dame Deborah James has died, and our hearts go out to her family and everyone who knew and loved her. Deborah’s star shone bright; she was a true inspiration.

‘She turned her bowel cancer diagnosis into an incredible force for good and through her tireless campaigning to raise awareness of bowel cancer symptoms, will have saved countless lives.

‘Deborah brought warmth, energy, and honesty to everything she did. Even during her most difficult times living with bowel cancer, she never stopped helping others.

‘We are truly grateful to have known Deborah and to call her our friend. She was a powerful patron for Bowel Cancer UK, and leaves a stunning legacy through her BowelBabe Fund, a testament to the love and admiration so many had for her.’