Busy Philipps has taken a stand even if it means a run-in with the law. In photos and videos shared to her Instagram account on Thursday, the Girls5eva star chronicled herself protesting in Washington, D.C. before she was arrested.

In video footage, the actress — sporting a T-shirt that read “I will aid and abet abortion” — can be seen holding up the peace sign and smiling while seated on the ground as a police officer puts something on her wrist and then leads her away. In another video published by VICE News, Philipps said it was for “equality” that she came out and got arrested. ET has reached out to police and Philipps’ rep for comment.

Meanwhile, the star issued a lengthy statement on Instagram following her protest, which comes nearly a week after Roe v. Wade was overturned by the Supreme Court, ending the constitutional right to abortion.

“On Friday, the right to make decisions about our own bodies and lives – a right we’ve had for almost 50 years – was ripped away from us by this new Supreme Court, a Court whose personal belief’s are NOT shared by the vast majority of Americans. I am one of those Americans,” the mom of two wrote. “I was proud to stand today alongside Planned Parenthood Action Fund, the Working Family’s Party, Reverend Barber and the Poor People’s Campaign, Catholic’s for Choice, The National Council of Jewish Women, mi Familia Vota, the Center For Popular Democracy Action and NARAL in an action of peaceful civil disobedience to let lawmakers but more importantly, the people who will be most impacted by this outrageous decision, know that we will not back down, we will not give in and we will not stop fighting until there is equality for all Americans. I can think of no better way to use my privilege and voice than to amplify the message that bodily autonomy IS a human right, as it is ACTUALLY the exact same thing as the promise of life, liberty and the pursuit of happiness.” 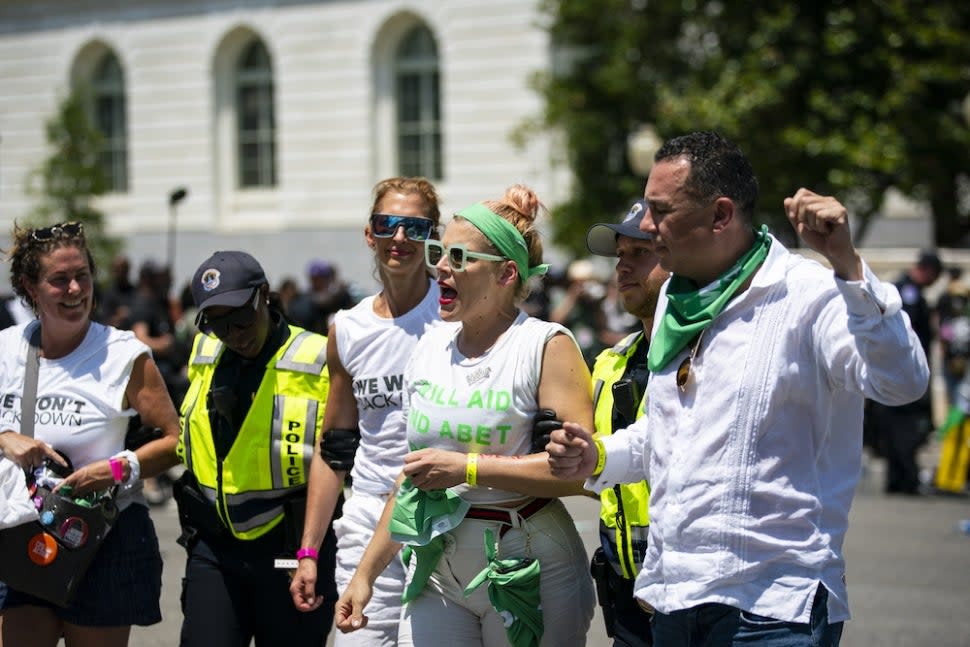 She encouraged, “We must ensure that it applies to all of us. This is the fight of a lifetime, y’all. It’s not gonna be short, easy or without setbacks. But we must MUST MUST keep showing up and taking action. *YOU* must. I promise I will.”

The actress emphatically concluded her lengthy statement with, “ENOUGH OF THIS. ENOUGH OF BEING BULLIED BY PEOPLE WHO DO NOT CARE ABOUT YOU OR ME. WE HAVE TO ALL SHOW THE F**K UP. I DON’T KNOW WHO NEEDS TO HEAR THIS BUT WE NEED TO SHOW THE F**K UP NOW.”

The actress has previously shared her own experience with abortion as a teenager. “I had an abortion when I was 15 in Arizona,” she recalled to Not Skinny But Not Fat‘s Amanda Hirsch, “and that abortion today would be, like, almost impossible I think for me to get — let’s be real.”