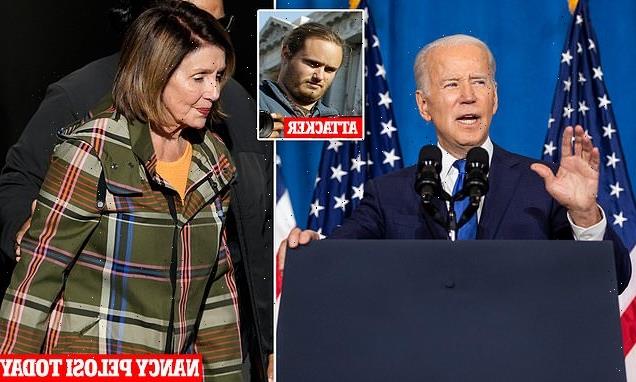 Biden warns ‘dark forces that thirst for power’ could prevail in midterms: President links attack on Paul Pelosi to Trump, the ‘Big Lie’, January 6 and MAGA Republicans in divisive speech warning of AUTOCRACY and ‘300 election deniers’

President Joe Biden on Wednesday tied the attack on Paul Pelosi to former President Donald Trump and his refusal to accept defeat in the 2020 presidential election, and warned ‘dark forces with a thirst for power’ will threaten democracy in the midterms.

Biden didn’t call out Trump by name but it was clear he was making next week’s election a referendum on Trump’s ‘Big Lie’ – his false claim he won two years ago but was thwarted by voter fraud.

‘American democracy is under attack because the defeated former president of the United States refused to accept the results of the 2020 election,’ Biden said in a speech at Washington D.C.’s Union Station.

‘And he’s made the big lie, an article of faith in the MAGA Republican Party,’ Biden said. ‘The great irony about the 2020 election is that it’s the most attacked election in our history. And, yet, there’s no election in our history that we can be more certain of its results. Every legal challenge that could have been brought was brought. Every recount that could have been undertaken was undertaken. Every recount confirmed the results.’

Biden attempted to pivot the conversation back to the protection of American democracy at a time voters say they are most worried about the economy and the high cost of living due to inflation. Crime remains another top concern.

Republicans accused him of trying to change the topic at a time voters give Biden low marks on how he has dealt with the economy and as the GOP sees a surge in momentum in the polls ahead of next Tuesday’s election.

Wednesday’s speech, designed to be a soaring rally to Democrats with six days to go until Election Day, was made in front of a friendly crowd of about 150 young Democrats, who lined up for two hours ahead of time to get inside.

Biden began his remarks by recounting last week’s attack on Paul Pelosi, the husband of Speaker Nancy Pelosi, and tied it into the violence that swarmed the Capitol building on January 6th during the insurrection.

He blasted the rising rate of violence in the country, citing dark forces at work.

‘This institution, this intimidation, this violence against Democrats, Republicans, and nonpartisan officials just doing their jobs, are the consequence of lies told for power and profit, lies of conspiracy and malice, lies repeated over and over to generate a cycle of anger, hate, vitriol, and even violence,’ he said.

‘We the people must decide whether the rule of law will prevail or whether we will allow the dark forces and thirst for power put ahead of the principles that have long guided us,’ he said. 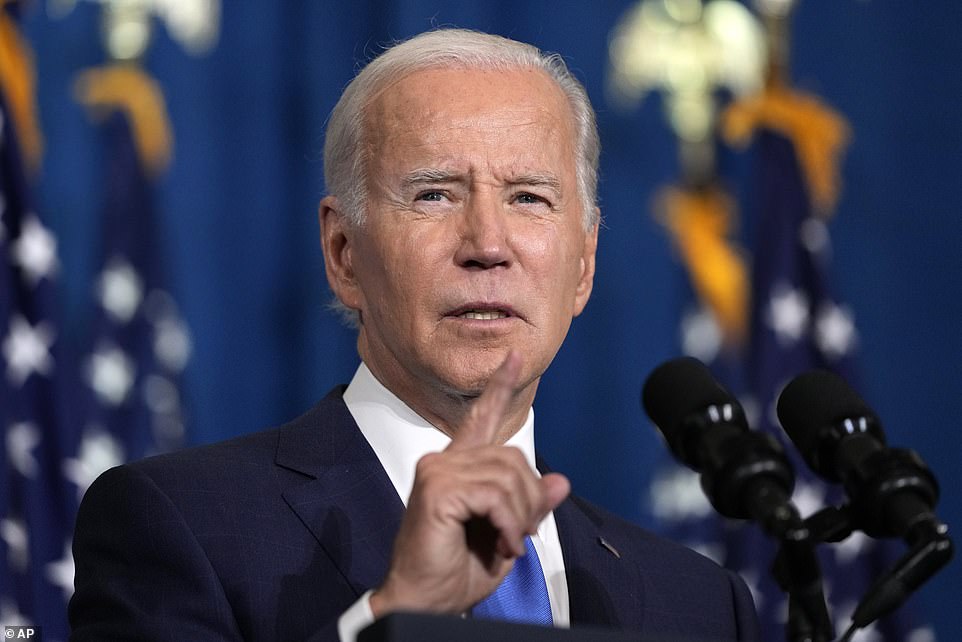 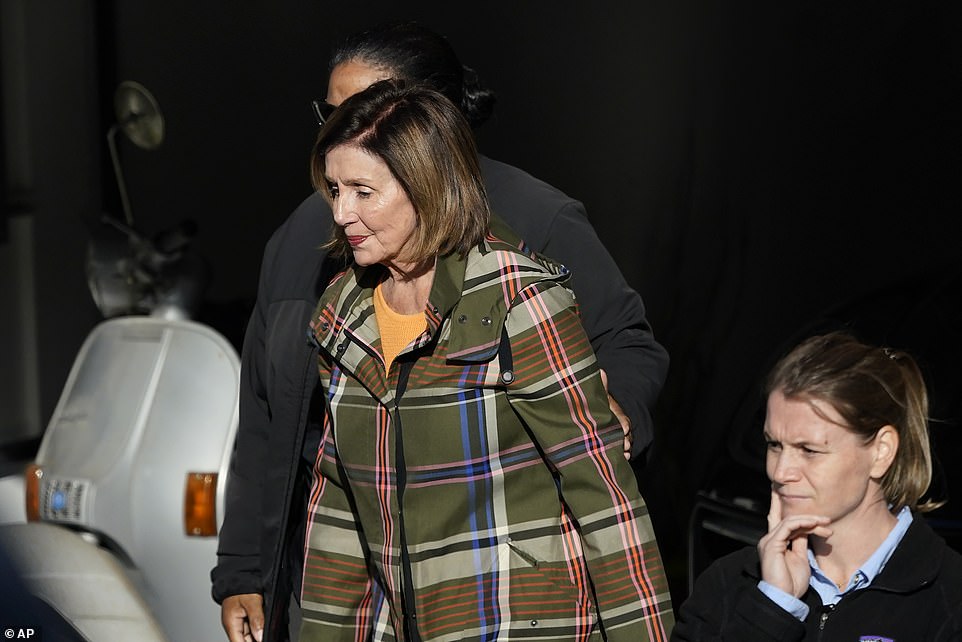 Biden called on Americans of all political backgrounds to show their support for Democracy in the Nov 8th election when Republicans are predicted to take control of at least one chamber of Congress.

He pointed out at least 300 candidates on the ballot next week are refusing to say if they will accept the results of the election.

He painted the midterm election as a battle between democracy and autocracy.

‘This year I hope you’ll make the future of our democracy an important part of your decision to vote and how you vote,’ he said.

‘What we’re doing now is going to determine whether democracy will long endure,’ he warned.

Republicans blasted him for trying to bring a distraction from voters’ economic concerns.

‘President Biden is trying to divide and deflect at a time when America needs to unite—because he can’t talk about his policies that have driven up the cost of living. The American people aren’t buying it,’ House GOP Leader Kevin McCarthy said on Twitter.

‘Desperate and dishonest. Joe Biden promised unity but has instead demonized and smeared Americans, while making life more expensive for all. While Republicans remain focused on the issues that matter most to voters, Biden and Democrats are flailing in the final days because they have lost touch with the concerns of families struggling to get by,’ Republican National Committee Chairwoman Ronna McDaniel said in a statement.

Biden spoke from the Columbus Club in Union Station, a few blocks from the Capitol building – the site of the January 6th insurrection where Donald Trump supporters tried to stop the certification of the 2020 election results.

His remarks come as Democrats fear defeat at the ballot box in the Nov. 8th election. Republicans are favored to win the House. The Senate is more competitive.

Biden noted this is the first election since that violent day on Capitol Hill.

He also acknowledged early voting has begun in many parts of the country and used it to point out that election intimidation has already begun.

‘Instead of waiting until an election is over, they’re starting well before it. They’re starting now. They’ve emboldened violence and intimidation of voters and election officials. It’s estimated that there are more than 300 election deniers on the ballot all across America this year. We can’t ignore the impact this is having on our country. It’s damaging, it’s corrosive, and it’s destructive,’ he said.

He also warned that the results of many contests may not be known until a few days after the election.

‘We know that many states don’t start counting those ballots till after the polls close on November 8th. That means in some cases we won’t know the winner of the election for a few days until a few days after the election. It takes time to count all legitimate ballots in a legal and orderly manner. It’s always been important for citizens in the democracy to be informed and engaged. Now it’s important for a citizen to be patient as well. That’s how this is supposed to work,’ he said. 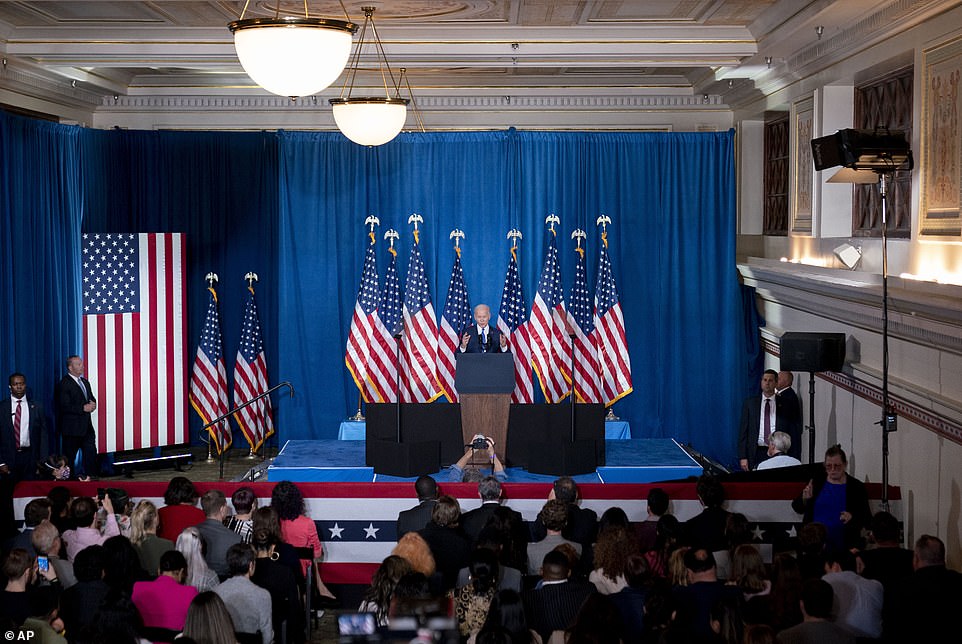 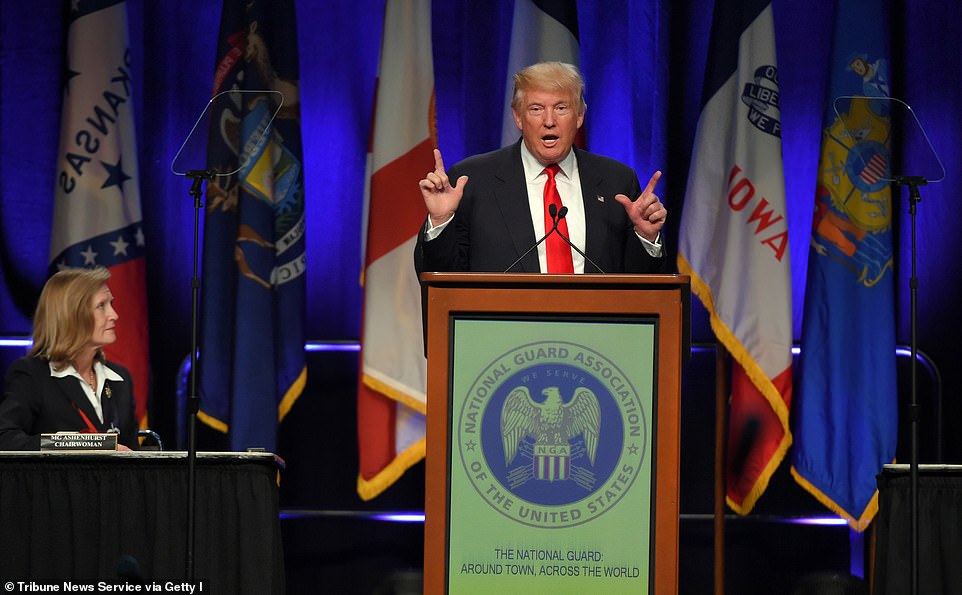 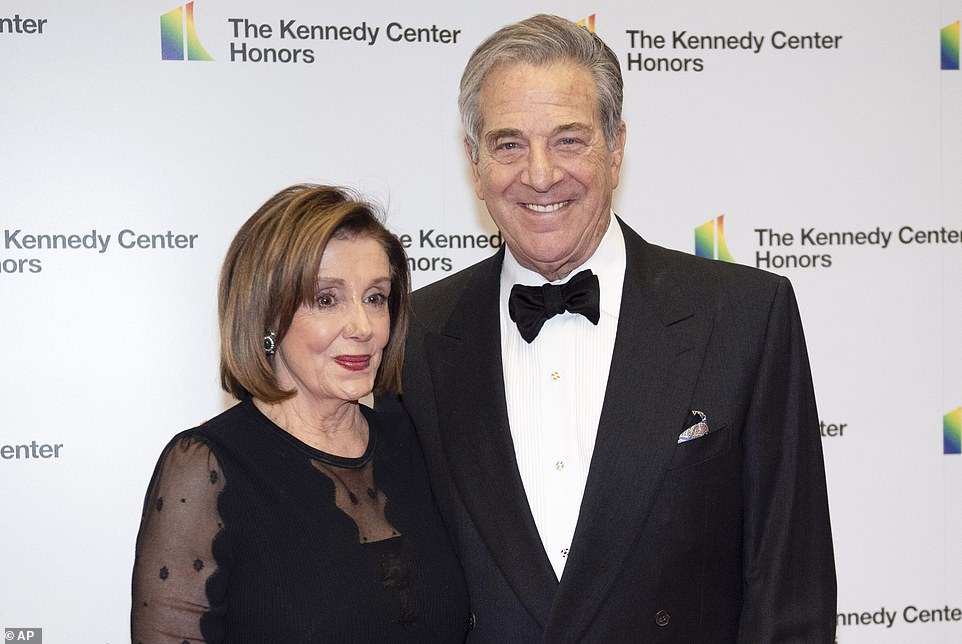 Nancy Pelosi is pictured in December 2019 at a dinner with her husband Paul; Biden opened his speech by talking about the attack on Paul last week 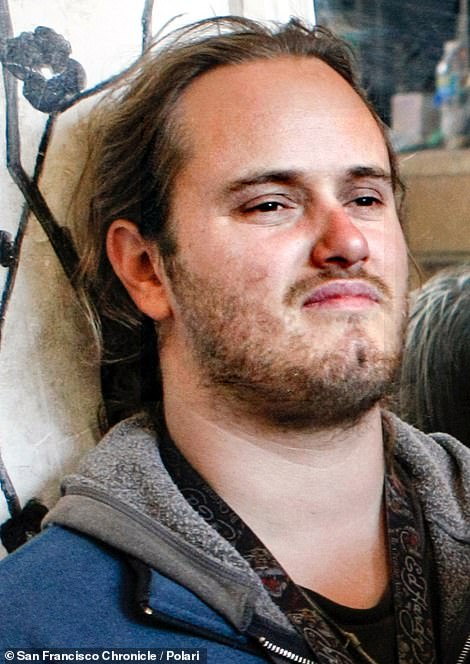 David DePape, 42. is accused of breaking into Pelosi’s home and attacking Paul Pelosi

Biden’s speech was handled by the political arm of the party and not by the White House.

It comes amid a fear of political violence in the wake of the attack on Paul Pelosi, who remains in the hospital after being beaten by a hammer. Speaker Pelosi was seen Wednesday going to visit him.

Threats against members of Congress rose in the wake of Trump’s election and Speaker Pelosi was a target of his MAGA supporters on January 6th.

Meanwhile, in the runup to next week’s election, several Republican candidates have declined to say whether they would accept the results of their contests.

And Trump continues to spread the false claim he won the 2020 election. Meanwhile, a majority of Republican nominees on the ballot this November for the House, Senate and key statewide offices — 291 in all — have denied or questioned the outcome of the last presidential election, according to a Washington Post analysis.

Union Station, the location of Biden’s remarks, has become a hotbed of crime in the nation’s capital, with a Starbucks closing in July over safety concerns and homeless setting up tents outside the entrance.

There was also a shooting outside of the station’s Shake Shack in September.

The location of the speech was deliberately chosen to raise comparisons from the January 6th insurrection.

‘He’ll be making this speech from Capitol Hill…because on January 6th we saw violence geared towards subverting Democratic processes there. So it is an appropriate place to make these remarks tonight,’ White House adviser Anita Dunn told an Axios panel early Wednesday.

She said the president ‘will be very clear tonight that he is speaking to people who don´t agree with him on any issues, who don´t agree on his agenda, but who really can unite behind this idea of this fundamental value of democracy.’

Biden often talks about the fight for the ‘soul of the nation’ and has said democracy is on the ballot.

But polls show the economy is the top concern for voters ahead of the Nov. 8 election that will decide the control of Congress.

A Gallup poll out on Monday found that 49% said the economy was their top issue, followed by abortion and crime at 42% and 40%. 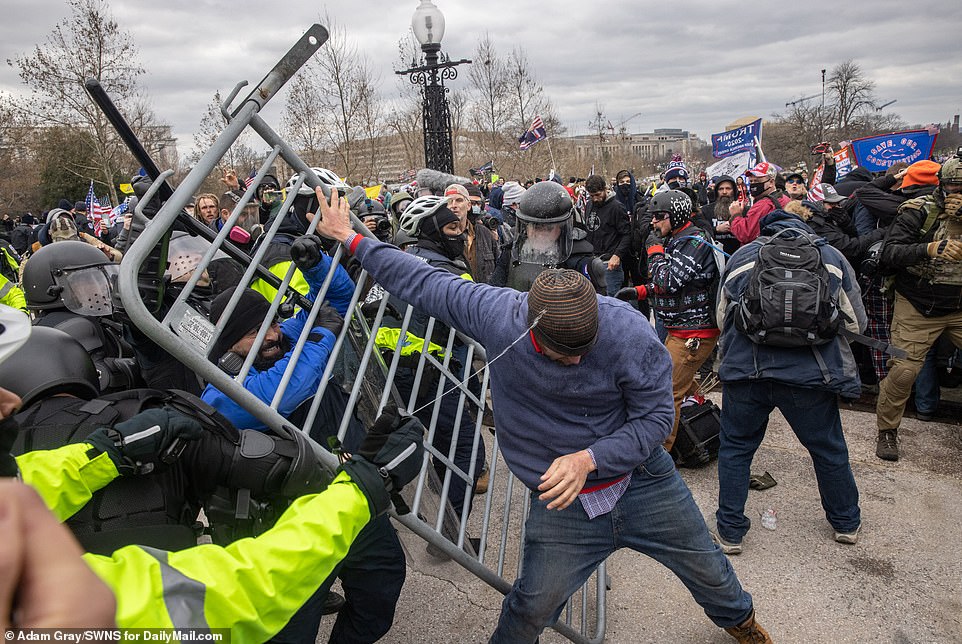 Trump’s MAGA supporters at the Capitol on January 6th 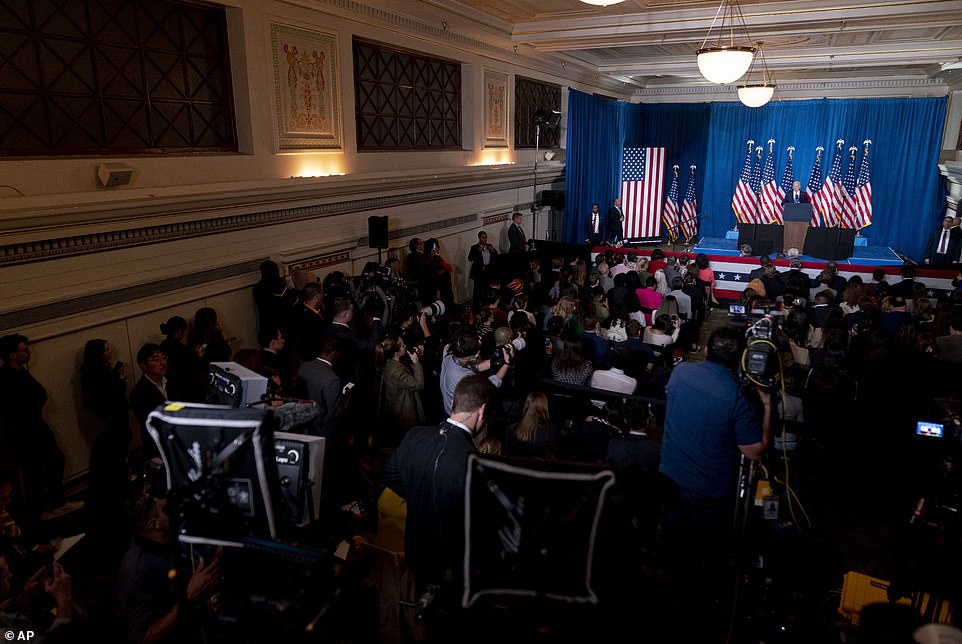 President Biden spoke to a crowd of about 150 young Democrats, many of whom waited a few hours to get into his remarks

Biden’s target audience for his remarks, however, could be his own Democrats.

An NPR/PBS/Marist survey found that enthusiasm is down among Democratic voters compared to Republicans.

Black voters, Latinos and young voters – all key Democratic voting groups – are among the least fired up about the election.

Democrats see preserving democracy and abortion rights as motivators for their base.

Since the Supreme Court ruling in the Dobbs case, which overturned Roe v. Wade, Biden and his surrogates has emphasized reproductive rights are at a risk and point to Republican efforts to pass laws outlawing abortion.

Biden mentions both issues on the stump frequently. He even brought it up in Wednesday interview on the Smartless podcast when he talked with hosts Jason Bateman, Sean Hayes, and Will Arnett.

‘People have to vote,’ the president said. ‘Look, the best example is the Supreme Court in the Dobbs decision said there’s a line from one of the justices saying, ‘Women have a right to vote. We’ll see if they do.’ You saw what happened in Tennessee. Women showed up and vote. Women are out registering men for the first time significantly for this new election.’