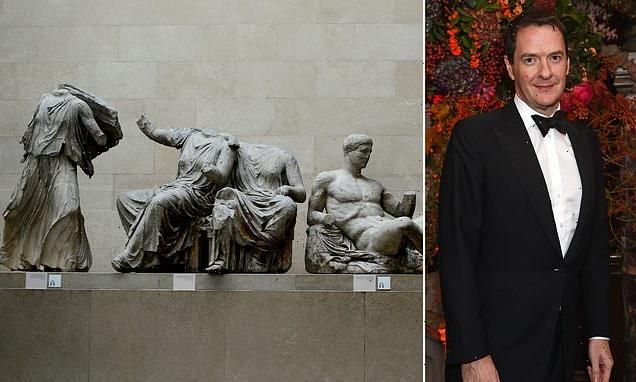 ANDREW PIERCE: Why does Osborne want to send Elgin Marbles to Greece?

ANDREW PIERCE: What gives the smuggest man in politics, George Osborne, the right to send the Elgin Marbles back to Greece?

As Matt Hancock prepared to speak last month at the launch party of his Pandemic Diaries at the Science Museum in London, the chatter among guests was about his exploits in the I’m A Celebrity jungle.

Former Chancellor George Osborne was in particularly garrulous mood, perhaps enjoying being one of the most famous faces in the room — Cabinet ministers who were invited couldn’t attend because they were on a three-line Whip for a vote in Parliament.

When Hancock started speaking a respectful hush descended, yet Osborne — in an open-necked shirt, and uber-cool £160 Cloudnova trainers — carried on talking. Loudly.

Oblivious or, even worse, indifferent to the glares of his fellow guests, he continued his conversation with Emily Maitlis the former BBC Newsnight presenter. 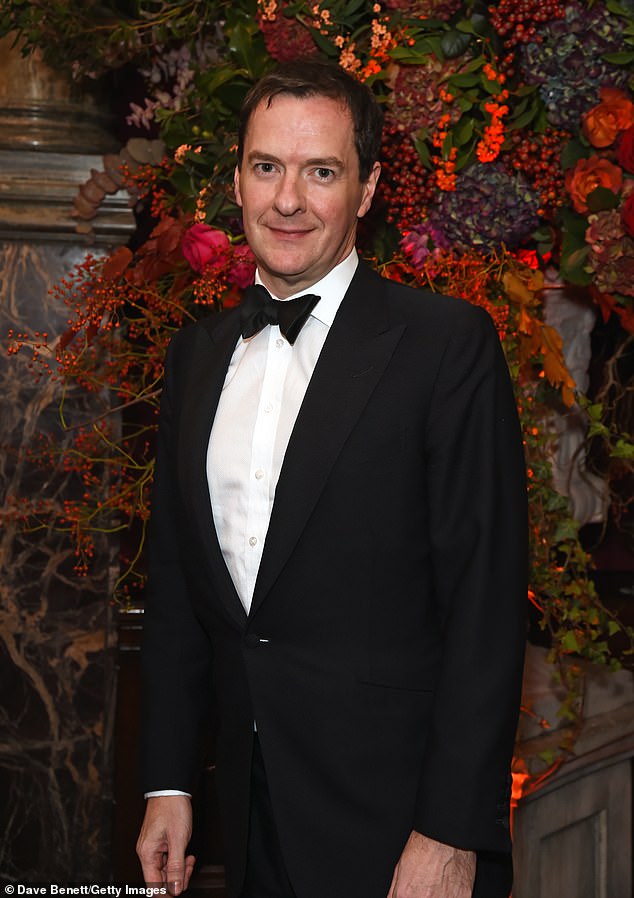 Former Chancellor George Osborne was in particularly garrulous mood, perhaps enjoying being one of the most famous faces in the room — Cabinet ministers who were invited couldn’t attend because they were on a three-line Whip for a vote in Parliament

According to one politician guest, the former Chancellor, who was accompanied by his heavily pregnant fiancée Thea Rogers, was ‘oozing entitlement and patrician superiority. He had the air of a public school bully and, sadly, no one told him to shut-up’. Never a retiring sort, Osborne — who went to St Paul’s and joined the Bullingdon Club at Oxford University — has a renewed swagger in his step now. It appears he is once again — discreetly — operating the levers of power.

A few weeks ago, shortly before the Autumn Statement, he was photographed going into 11 Downing Street at the invitation of Chancellor Jeremy Hunt.

Now, as chairman of the British Museum, he appears to be on the verge of closing a deal with the Greek government which would see the return of the Elgin Marbles to Greece — and with it, the resolution of our longest-running cultural dispute.

The UK law prevents the British Museum from giving the marbles away, but he proposes to repatriate them as part of a ‘long-term loan’.

Initially, just a small proportion of the marble frieze scenes, plaques and statues would find their way to Athens, with Ancient Greek treasures on loan from Athens travelling the other way, among them a 2,000-year-old bronze statue of a horse and jockey.

The speed of this apparent deal — let alone the lack of detail about any agreement — has alarmed some commentators. Osborne was appointed chairman of the Museum last October. A month later, he began conducting secret meetings with the Greek PM over the repatriation of the masterpieces.

No public debate. Not even an announcement that the talks were taking place.

For decades, Greece has been demanding the return of the marbles. Made up of 17 sublime figures, they are part of a frieze that decorated the 2,500-year-old Parthenon temple on the Acropolis, and were made by great classical sculptor Phidias in the 5th century BC.

As chairman of the British Museum, he appears to be on the verge of closing a deal with the Greek government which would see the return of the Elgin Marbles (pictured) to Greece — and with it, the resolution of our longest-running cultural dispute

In the early 19th century, Lord Elgin, then British ambassador to the Ottoman Empire, acquired the rights to them, thanks to a firman — a royal decree — issued by the Sultan (Greece was at the time under Ottoman rule) and arranged their shipment to Britain.

Of course, this act of cultural vandalism was wrong. But at the time, the Parthenon had fallen into ruin and some of the marbles had been destroyed by neglect and war — a fate that the remaining treasures could all too easily have suffered had Lord Elgin not stepped in.

After a parliamentary investigation approved their move to Britain, they became a prime attraction in the British Museum where they have been beautifully preserved and freely available for all to admire or study.

Many argue that if they were now to leave Britain, Pandora’s box would be opened. There would be no end to the claims that would be made for restitution of the exhibits of great museums all over the world.

The British Museum insists that a deal with Greece would not ‘dismantle our great collection’ and that the museum would retain legal ownership of the marbles — even though the Greeks do not acknowledge British ownership.

Perhaps more importantly for Osborne, a deal would be a significant international feather in his cap. One senior source said: ‘It would be terrific for George if he is the museum chairman that gets the marbles or some of them, physically back in Athens for the first time in more than 200 years … ’

It could also be the springboard for a role as an international statesman for which he yearns, such as managing director of the International Monetary Fund or president of the World Bank in Washington.

Osborne has long cultivated his image as a man of culture. An opera buff, he is a devotee of Wagner and he has a large art collection in his £5 million mansion in Notting Hill and his £1.6 million Georgian house in Bruton, an enclave in Somerset.

In the West Country, he’s on good terms with his neighbours Iwan Wirth and Manuela Hauser who have been described as the most powerful couple in the art world. They moved to Bruton in 2007 after selling their London home to David and Victoria Beckham for £30 million. 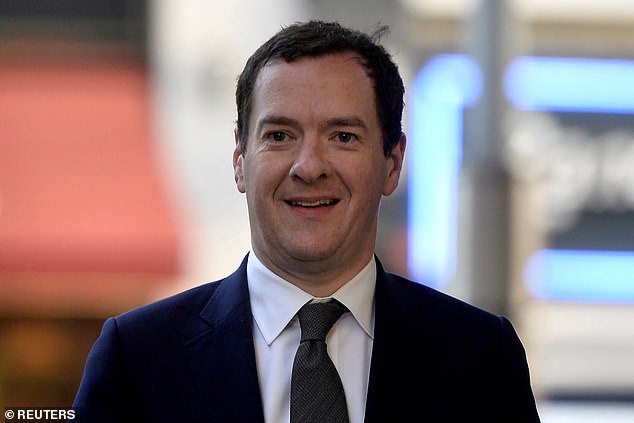 Osborne has long cultivated his image as a man of culture. An opera buff, he is a devotee of Wagner and he has a large art collection in his £5 million mansion in Notting Hill and his £1.6 million Georgian house in Bruton, an enclave in Somerset

They opened a branch of the Hauser & Wirth gallery at a farm in Bruton. The restaurant at the gallery has people queuing for hours as it’s the place to see and be seen. Needless to say Osborne is a regular.

Nor has he ever been short of money to indulge in his art. The beneficiary of a multi-million pound family trust, courtesy of his family’s wallpaper business Osborne & Little, he secured a lucrative partner’s post last year at the Mayfair Investment bank, Robey Warshaw.

Osborne joined the City advisory firm last April, giving up all his other commercial posts including £650,000 a year for working one day a week as an adviser to the fund manager BlackRock. It seems to have been worth it: just before Christmas, Robey Warshaw announced that a payout of £26.5 million for the year would be shared among four partners — of whom Osborne is one.

It was in his capacity as adviser to BlackRock that Osborne became heavily involved in the successful bid by Los Angeles Dodgers part-owner Todd Boehly last spring to clinch a £4.3 billion takeover of Chelsea Football Club from Roman Abramovich. Robey Warshaw was an adviser to the consortium fronted by Mr Boehly.

But despite Osborne’s riches, he has been angling to get back into his greatest love: politics.

Most former Chancellors would have opted for discretion and used the backdoor or the maze of corridors in Whitehall which offer a private route into Downing Street if invited for talks by Jeremy Hunt.

But not Osborne. For six years he was frozen out by Conservative leaders, first Theresa May and then Boris Johnson. Now, however, he is back and in the thick of it — and he wants the world to see it.

He was thrilled to read subsequent commentaries on the Autumn Statement referring to the ‘rhetoric of Osborne and the policies of Gordon Brown’ — no matter how such images made the hearts of many others sink.

For not everyone is as delighted with Osborne’s new-found influence as clearly he is. Some Tory MPs fear it is a worrying sign that Hunt — who, like Osborne, was an ardent Remainer — will try to water down Brexit.

When he was Chancellor, Osborne was the architect of the Treasury’s ‘Project Fear’ in which he menacingly warned that voting for Brexit would lead to a ‘severe shock’ and a £36 billion annual hit to the economy. It would lead to an emergency Budget with savage spending cuts and huge tax hikes, he claimed. 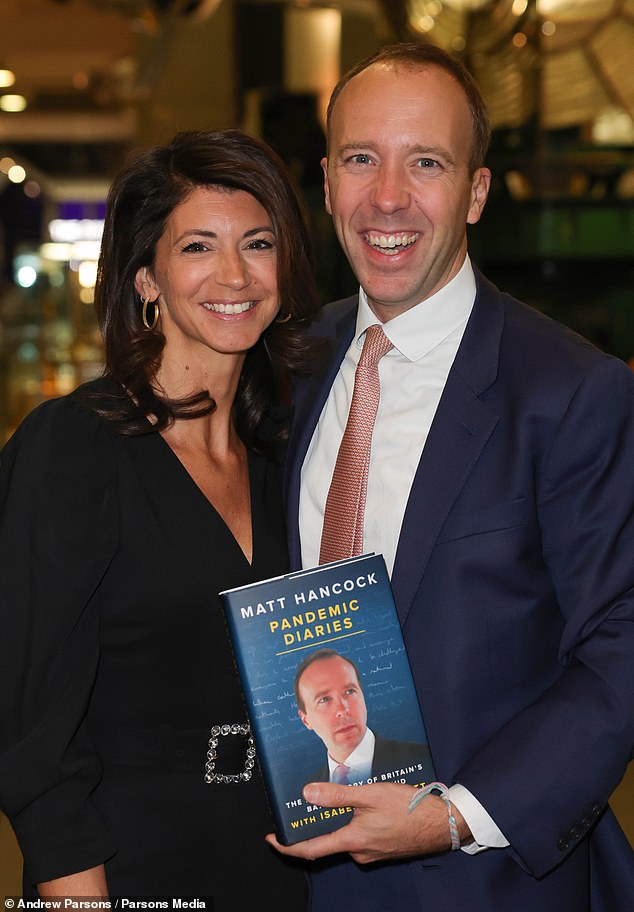 As Matt Hancock (pictured with girlfriend Gina Coladangelo) prepared to speak last month at the launch party of his Pandemic Diaries at the Science Museum in London, the chatter among guests was about his exploits in the I’m A Celebrity jungle

Yet despite this, Osborne appears already to have spread his tentacles in Rishi Sunak’s Downing Street, with a network of influential friends in place. Rupert Harrison, who was Osborne’s chief of staff at the Treasury and is a portfolio manager at the investment giant BlackRock, is one of four figures Hunt has chosen for his new economic advisory council. Osborne is telling friends he had a major hand in the appointment.

Eleanor Shawcross, the head of the Number 10 policy unit, is one of his best friends. Oliver Dowden, the Cabinet Office minister and Rishi Sunak’s right-hand man, is also close.

When David Cameron was Prime Minister and Osborne was Chancellor, Dowden was the PM’s deputy chief of staff. His desk was equidistant between Cameron’s in No 10 and Osborne’s in No 11.

‘No wonder George is even more insufferable than usual,’ said one political source. ‘He’s got his people in the right places so he can whisper words of advice.’

What’s more, it appears that Hunt has been aping Osborne’s behaviour. In early December, Hunt hosted a summit of bankers in Downing Street to discuss the cost of living crisis, a tactic straight from the Osborne play book.

In 2016, after the Brexit vote, Osborne summoned banking chiefs to Downing Street and called for a ‘national effort’ to steer the country through what he predicted would be difficult times. Hunt’s language was remarkably similar after the summit.

Former Tory leader William Hague joked in a speech at that 40th birthday party that Osborne’s first law was to ‘work out, ahead of anyone else, who will be the next leader, stick to them like glue and become indispensable’.

Following Oxford University, Osborne worked at the Conservative Research Department and became William Hague’s speechwriter. After divorcing his wife, Frances Howell, the novelist and daughter of former Conservative Cabinet Minister Lord Howell, he became engaged to Rogers last year. She used to be his media adviser when he was Chancellor.

They have a son, Beau, and the new baby is due to arrive any day. They are expected to get married next year.

An Osborne admirer said: ‘He’s rich, he’s got a hugely well-paid job, and a young family. But he’s hugely excited by politics and thinks that, aged 51, he still has one big job ahead of him in public life like the IMF or the World Bank. You can’t rule out the idea of him having another go.’

All well and good. But the question is whether George Osborne’s increasing influence on British affairs — both political and cultural — befits someone who, however talented, is unelected. And whose views on Brexit were so spectacularly rejected by the British public.