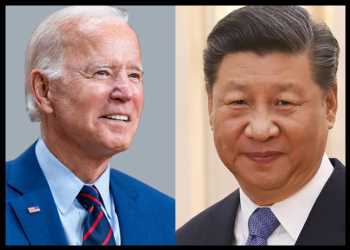 President Joe Biden will meet with his Chinese counterpart Xi Jinping on the sidelines of the East Asia Summit in Bali, Indonesia, on Monday.

This will be the first meeting between the two leaders since Biden became President.

President Biden has made it a priority to keep lines of communication open with President Xi to responsibly manage the competition between the two major powers.

“The meeting between President Biden and President Xi will be an in-depth and substantive opportunity to better understand one another’s priorities and intentions, to address differences, and to identify areas where we can work together,” National Security Advisor Jake Sullivan said at a news conference.

“The Leaders will discuss efforts to maintain and deepen lines of communication between the United States and the PRC, responsibly manage competition, and work together where our interests align, especially on transnational challenges that affect the international community,” according to White House Press Secretary Karine Jean-Pierre.

The two Leaders will also discuss a range of regional and global issues, she said in a statement.

While in Bali, Biden is also scheduled to hold bilateral and trilateral meetings with the Prime Minister of Japan and the President of South Korea in light of the continuing nuclear and missile threats posed by North Korea.

On Tuesday and Wednesday, President Biden will attend the G20 Summit where he’ll focus on a range of pressing global economic challenges, especially for emerging and vulnerable economies, including energy security and the clean energy transition, food security, debt relief for low- and middle-income countries, multilateral development bank reform, and the launch of a pandemic preparedness fund.

The President will have the opportunity to hold a number of other bilateral meetings on the margins of the G20, including a potential first meeting with the new prime ministers of the United Kingdom and Italy.

Biden is currently attending the UN Climate Change Conference in Sharm El-Sheikh, Egypt. He is set to address COP27 at 10:15 AM ET, Friday.

While in Egypt, Biden will meet with President Al Sisi to discuss a number of critical regional and bilateral issues.

On Saturday, he will arrive in Cambodia and attend the U.S.-ASEAN Summit.

On the next day, Biden will participate in the East Asia Summit.

Secretary of State Antony Blinken will be accompanying the President in Egypt, Cambodia and Indonesia.