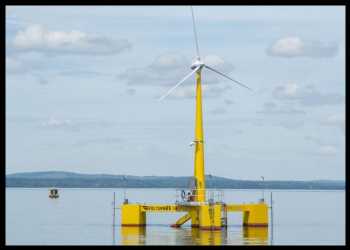 Initiatives on Floating Offshore Wind, launched by Departments of Energy, Interior, Commerce, and Transportation, aim to deploy 15 GW of floating offshore wind capacity by 2035, power 5 million homes through this source of energy, and lower costs 70 percent by 2035.

The Administration will advance lease areas in deep waters in order to deploy 15 GW of floating offshore wind capacity, building on the President’s existing goal of deploying 30 GW of offshore wind by 2030, which will be largely met using fixed-bottom technology.

DOI’s Bureau of Ocean Energy Management will advance lease areas in deep waters for floating technology, starting with a lease auction off the coast of California by the end of 2022. Achieving this ambitious target is estimated to avoid an estimated 26 million metric tons of carbon emissions annually.

Conventional offshore wind turbines can be secured directly to the sea floor in shallow waters near the East Coast and the Gulf of Mexico. However, deep-water areas that require floating platforms are home to two-thirds of U.S. offshore wind energy potential, including along the West Coast and in the Gulf of Maine. The Administration’s new actions will capture this vast potential to power millions of homes and businesses, grow new manufacturing and maritime industries at home, and tackle the climate crisis, the White House says.