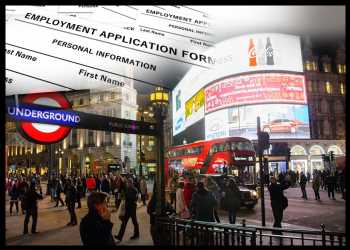 Labor shortage and economic uncertainty once again dragged permanent job placements in the UK, and rising inflation coupled with competition for workers continued to send the starting salaries higher, a survey report compiled by S&P Global showed Thursday, vindicating the tightness of the labor market.

Permanent job placement decreased for a second month, albeit at a softer pace, while temp billings rose moderately, the KPMG/REC Report on Jobs, based on the responses of around 400 consultancy firms, revealed.

Demand for both permanent and temporary staff increased in November. However, in both cases, the increases were the slowest seen over the last 21 months.

Pay pressures remained historically high due to the lack of workers and high inflation. Nonetheless, the rates of inflation for both starting salaries and temp wages eased again.

The increase in candidate availability was the weakest since April 2021 with recruiters citing fewer foreign workers and a greater hesitancy among people to take up new jobs amid economic uncertainty as reasons for the current tight labor market situation.

Neil Carberry, chief executive of the Recruitment & Employment Confederation, said a flatter period in the labor market is inevitable but demand is being supported by some major underlying factors.

The main way to boost performance is to unlock growth by businesses putting their people planning first, as a strategic way to enhance productivity, Carberry added.