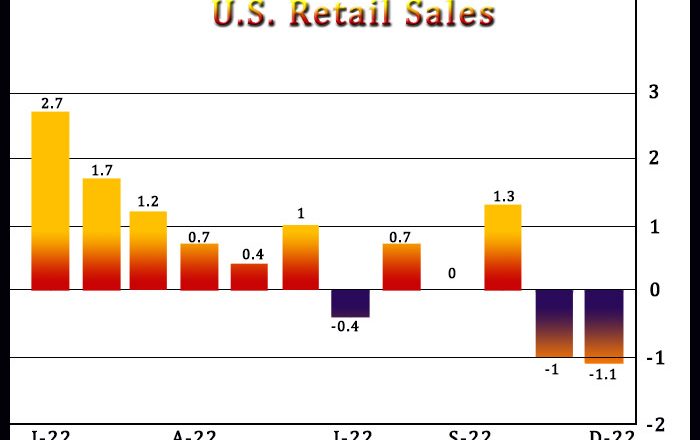 A report released by the Commerce Department on Wednesday showed a steep drop in U.S. retail sales in the month of December.

The Commerce Department said retail sales tumbled by 1.1 percent in December after slumping by a revised 1.0 percent in November.

Economists had expected retail sales to decrease by 0.8 percent compared to the 0.6 percent drop originally reported for the previous month.

Andrew Hunter, Senior US Economist at Capital Economics, said the steep drop in retail sales “adds to the evidence from the surveys that the economy was rapidly losing momentum towards the end of last year.”

“Although GDP growth still looks to have held up over the fourth quarter as a whole, we continue to expect the economy to fall into recession in the first half of this year,” Hunter added.

The report showed a continued slump in sales by motor vehicle and parts dealers, which dove by 1.2 percent in December after plunging by 2.6 percent in November.

Excluding the decrease in sales by motor vehicle and parts dealers, retail sales still tumbled by 1.1 percent in December following a 0.6 percent decline in November. Ex-auto sales were expected to fall by 0.4 percent.

The Commerce Department said sales by gas stations plummeted by 4.6 percent amid a decrease in gasoline prices.

Sales by department stores also showed a 6.6 percent nosedive, while sales by furniture and home furnishings stores tumbled by 2.5 percent.

Closely watched core retail sales, which exclude automobiles, gasoline, building materials and food services, fell by 0.7 percent in December after edging down by 0.2 percent in November.