Home » Economy » U.S. Consumer Confidence Pulls Back Much More Than Expected In October 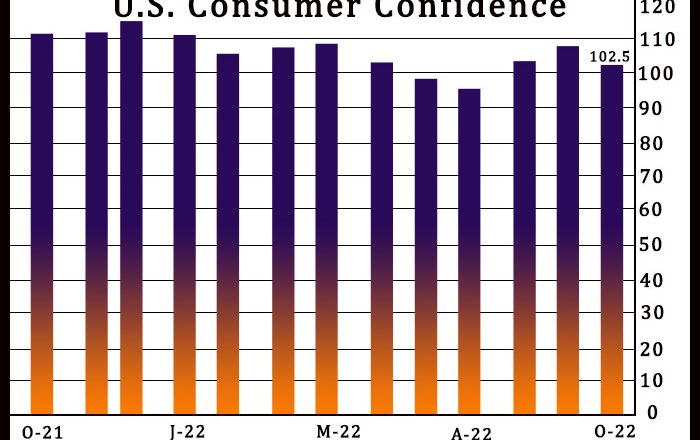 U.S. Consumer Confidence Pulls Back Much More Than Expected In October

A report released by the Conference Board on Tuesday showed U.S. consumer confidence pulled back by much more than expected in the month of October.

The Conference Board said its consumer confidence index slumped to 102.5 in October from a revised 107.8 in September. Economists had expected the index to dip to 106.0 from the 108.0 originally reported for the previous month.

“Consumer confidence retreated in October, after advancing in August and September,” said Lynn Franco, Senior Director of Economic Indicators at The Conference Board. “Notably, concerns about inflation—which had been receding since July—picked up again, with both gas and food prices serving as main drivers.”

She added, “Looking ahead, inflationary pressures will continue to pose strong headwinds to consumer confidence and spending, which could result in a challenging holiday season for retailers.”

The bigger than expected pullback by the headline index came as the present situation index tumbled to 138.9 in October from 150.2 in September, suggesting economic growth slowed to start the fourth quarter.

The expectations index also slipped to 78.1 in October from 79.5 in September, with a reading below 80 associated with recession.

On Friday, the University of Michigan is scheduled to release its revised reading on consumer sentiment in the month of October.

The consumer sentiment index for October is expected to be unrevised at 59.8, which was up from 58.6 in September.