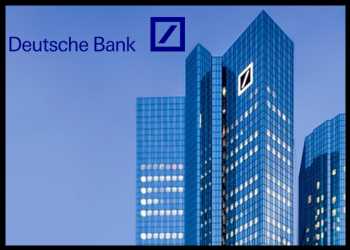 German banking major Deutsche Bank AG reported Wednesday that its third-quarter profit grew more than threefold with higher revenues and weak expenses. Profit before tax was its highest third quarter result since 2006. Meanwhile, Assets under management declined. The bank said it is on track to meet fiscal 2022 outlook.

Deutsche Bank shares were losing around 2 percent in the morning trading in Germany, and more than 1 percent in pre-market activity on the NYSE.

Christian Sewing, CEO, said, “In the third quarter and first nine months of 2022, we delivered our best profits in more than a decade for both these periods. … We have significantly improved Deutsche Bank’s earnings power and we are well on track to meet our 2022 goals.”

In its third quarter, net inflows were 8 billion euros, driven by Alternatives and Cash products.

Profit attributable to shareholders soared to 1.11 billion euros from 194 million euros in the prior year. Earnings per share were 0.57 euros, compared to 0.14 euros a year ago.

Profit before tax was 1.62 billion euros, up nearly threefold compared to 554 million euross in the prior year quarter.

The company noted that its profit growth reflected 15 percent year-on-year growth in net revenues together with an 8 percent reduction in noninterest expenses.

The Capital Release Unit delivered its 10th successive quarter of year-on-year loss reduction with a loss before tax of 216 million euros.

In Germany, Deutsche Bank shares were trading at 9.13 euros, down 1.52 percent.

In pre-market activity on the NYSE, the shares were trading at $9.17, down 1.3 percent.