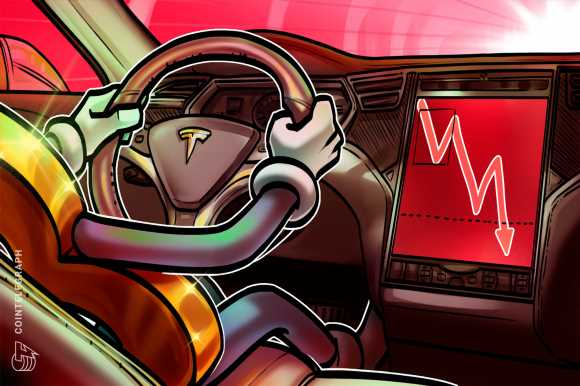 According to Tesla’s latest Q3 earnings report filed with the United States Securities and Exchange Commission, the electric vehicle (EV) manufacturer disclosed that it had invested a total of $1.5 billion into Bitcoin (BTC) since early 2021. Of this amount, the firm is currently sitting at a $170 million unrealized loss from the change in the fair value of its investment. This is offset by a gain of $64 million from realized profits on Bitcoin at various points in the last two years, leading to a net loss of $106 million by the end of Q3.

Tesla’s losses did not materially affect its core operations, the filing said. Year-over-year, the EV manufacturer’s profits grew 169% from $3.3 billion in the first nine months of 2021. However, Tesla says that it’s only holding roughl$218 million worth of Bitcoin on its balance sheet.

Under accounting rules, digital assets are considered indefinite-lived intangible assets. As a result, any decrease in their fair values will require Tesla to recognize impairment charges, whereas the firm does not make upward revisions for any price increases until a sale. In such beneficial tax treatment, losses can be deducted against profits to reduce tax liabilities, while capital gains are not taxed until the time of sale.

Tesla’s CEO, Elon Musk, is well-known in the crypto space for his support of digital assets, affinity for memecoins such as Dogecoin (DOGE), and $44 billion ambition to take over social media giant Twitter. Throughout the ongoing acquisition, the billionaire tech celebrity has pledged to “eliminate the spam and scam bots from the platform,” stating: “They make the product much worse. If I had a Dogecoin for every crypto scam I saw, we’d have 100 billion Dogecoin.”