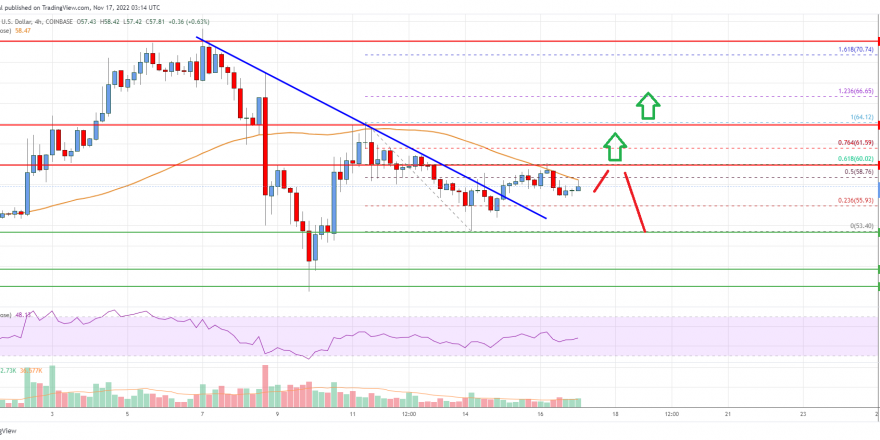 Litecoin price is struggling below $60 against the US Dollar, similar to bitcoin. LTC price could start a decent increase if it gains pace above the $60 level.

In the past few sessions, there was a fresh decline in bitcoin, ethereum, ripple, and litecoin against the US Dollar. Earlier, LTC was able to climb above the $60 and $62 resistance levels.

The bulls even pushed the price above the $63.50 level. However, they failed to clear the $65 resistance. A high was formed near $64.12 and the price started a fresh decline. There was a steady drop below the $62 and $60 levels. The decline gained pace below the $58 support and the 55 simple moving average (4-hours).

A low was formed near $53.40 and the price is now correcting losses. There was a move above the $55 and $56 levels. Besides, there was a break above a key bearish trend line with resistance near $57 on the 4-hours chart of the LTC/USD pair.

Looking at the chart, litecoin price is clearly trading below $60 and the 55 simple moving average (4-hours). Overall, the price could start a fresh increase if it clears the $60 resistance zone.

4 hours MACD – The MACD for LTC/USD is now losing pace in the bearish zone.