Home » Crypto » DeGods and Y00ts NFTs are bridging off Solana. Here's why 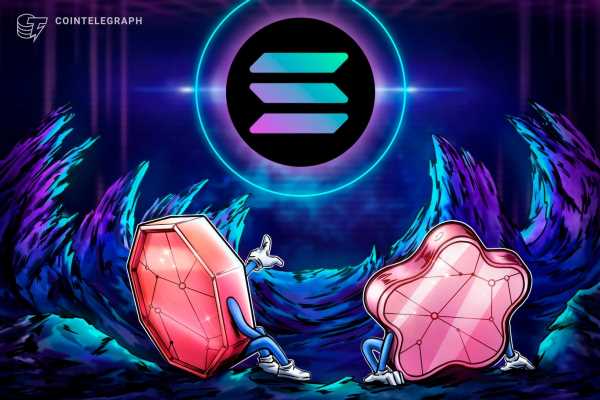 DeGods and Y00ts NFTs are bridging off Solana. Here's why

Nonfungible token (NFT) firm Dust Labs is migrating its two top-performing Solana NFT projects — DeGods and y00ts — onto Ethereum and Polygon in a bid to expand their adoption.

The news was announced on DeGods and y00ts Twitter page on Dec. 25, with both expected to be officially bridged onto Ethereum and Polygon respectively in the first quarter of 2023.

DeGods and y00ts creator Rohun Vora, known by the alias Frank III, said the decision was made to “explore new opportunities” and to allow for the continued growth of the collections. The move will also see the DUST token — used to buy, sell and mint NFTs on the DeGods ecosystem — also be bridged onto Ethereum and Polygon.

Vora confirmed that two NFT projects will still remain on Solana for the time being, and in a separate post responding to a Twitter user confirmed that the bridge migration will be owner “opt-in.”

During a Dec. 26 Twitter spaces, Vora explained to 66,000 listeners that it was simply a matter of getting the NFT projects on the platforms that he sees will drive the next wave of NFT adoption.

In his reasoning, he made parallels to the intense battle for intellectual property (IP) between streaming services such as Netflix, Disney Plus and HBO Max — suggesting that the streaming service that secures the best IP will ultimately win the lion’s share of viewers, which then attracts better projects.

“They’re trying to get the best IP on their streaming services because that IP is ultimately going to drive the growth on that platform.”

“Once you get enough IP on the platform it becomes a virtuous cycle, people want to be on Netflix because that’s just the brand and the place to be,” he added.

He said a similar battle is playing out between different blockchains that are trying to build the best NFT platforms, noting that as NFTs are driven by attention, there is an opportunity for “virtuous cycles” that would create a network effect for NFT projects.

From there, “the metrics, the volume and the liquidity will follow that,” he added.

Vora said his bullish view on Polygon for NFTs was influenced by the fact that Disney, Adidas, Nike and Reddit chose Polygon as their NFT platform of choice.

Vora also said that he had received grant offers from many other platforms, most of which were much larger than what was offered by Polygon, but Polygon provided y00ts with the best opportunities moving forward.

“Polygon by far was one of the lowest, if not the lowest in terms of dollar value, but we went with Polygon because we see a lot of opportunity on a strategic level and that’s what excites me and should excite you holders more than anything.”

The news has only added to the growing list of concerns for Solana, which has seen the total value lockedon the ecosystem fall 97.88%, going from a peak of $10.17 billion to $215 million at the time of writing, according to decentralized finance data aggregator DefiLlama.

Solana co-founder Anatoly Yakovenko shared his “bittersweet” feeling that the pair of NFT projects would no longer “100% focus on Solana” to his 223,600 Twitter followers on Dec. 26, but accepted the “reality” that these projects want to expand their reach.

But controversial figure Ben “Bitboy” Armstrong and a fair share of his 1 million Twitter followers weren’t so optimistic on Solana’s future, with 70% of 11,881 voters in a poll voting “Yes” to “Is Solana dead.”

According to DappRadar, both the y00ts and DeGods NFT collections are ranked first and second in terms of fiat transaction volume on Solana over the last 30 days.