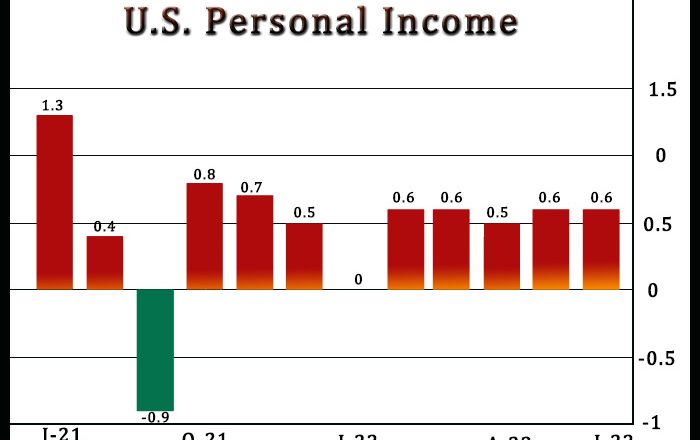 A report released by the Commerce Department on Friday showed personal income in the U.S. increased by slightly more than expected in the month of June.

The Commerce Department said personal income climbed by 0.6 percent in June following an upwardly revised 0.6 percent advance in May.

Economists had expected personal income to rise by 0.5 percent, matching the increase originally reported for the previous month.

The report also showed personal spending jumped by 1.1 percent in June after rising by an upwardly revised 0.3 percent in May.

Personal spending was expected to advance by 0.9 percent compared to the 0.2 percent uptick originally reported for the previous month.

However, the surge in spending was largely due to higher prices, as real personal spending, which excludes price changes, inched up just 0.1 percent in June after falling by 0.3 percent in May.

With spending in current dollars climbing by more than income, personal saving as a percentage of disposable income slumped to a 13-year low of 5.1 percent in June from 5.5 percent in May.

“There is probably scope for the saving rate to fall a little further from here,” said Michael Pearce, Senior U.S. Economist at Capital Economics. “And factoring in the drop in gasoline prices in recent weeks, real incomes should begin rising again in the second half of the year, which should also support spending in real terms.”

He added, “After growth of 1.0% annualized in the second quarter, we think real consumption is on track for a similar outturn in the third.”

Meanwhile, a reading on inflation said to be preferred by the Federal Reserve showed the annual rate of growth by core consumer prices, which exclude food and energy prices, accelerated to 4.8 percent in June from 4.7 percent in May.

The annual rate of growth by the personal consumption expenditures price index also accelerated to 6.8 percent in June from 6.3 percent in May, showing the fastest growth since January 1982.

A separate report released by the Labor Department showed the employment cost index jumped by 1.3 percent in the second quarter after surging by 1.4 percent in the first quarter.

“The Fed is monitoring employment costs as it looks for ‘compelling’ signs that inflation is declining, and Fed Chair Powell specifically cited the ECI in his press briefing earlier this week,” said Nancy Vanden Houten, Lead U.S. Economist at Oxford Economics.

She added, “The Q2 employment cost data doesn’t provide any evidence that wage growth is slowing and leaves the Fed on track to lift the funds rate another 75bps at its September meeting.”