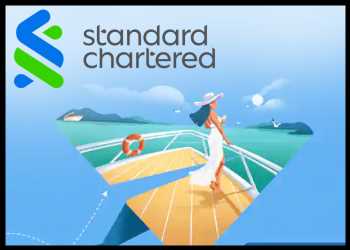 Shares of Standard Chartered Plc were gaining around 3 percent in the morning trading in London after the British bank reported Friday higher second-quarter results, and updated its forecast for fiscal 2022 income growth. The bank also announced a new $500 million share buyback to start imminently.

Bill Winters, Group Chief Executive, said, “We’ve posted a strong set of results for the first half of the year, with income up 10 percent on a normalised basis, supported by continued positive momentum in the second quarter, in which we grew income 11 percent. We remain disciplined on expenses, with significant savings delivered and maintained a strong capital position, with a CET1 ratio of 13.9 percent…. We remain confident in the delivery of the financial targets we set out in February.”

The company said the start to 2022 has been strong, albeit external conditions remain difficult to predict.

For the full year, the bank now expects income ex-DVA growth of around 10 percent at constant currency. The company earlier expected income growth to slightly exceed the 5-7 percent range.

Standard Chartered also said it is on track to deliver 10 percent return on tangible equity by 2024 if not earlier.

Underlying profit before taxation was $1.32 billion, compared to prior year’s $1.24 billion. Underlying earnings per share were 28.2 cents, compared to 24.8 cents last year.

Underlying operating profit before impairment and taxation went up 19 percent to $1.30 billion.

In the quarter, net interest income went up 8 percent from last year to $1.85 billion, and the growth was 13 percent at constant currency. Net interest margin improved to 1.35 percent from 1.22 percent last year.