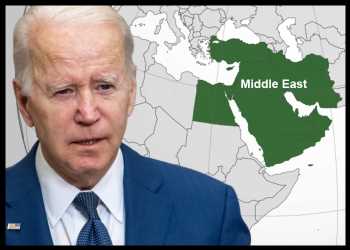 Biden’s four day visit, beginning on July 13, is to “reinforce the United States’ iron-clad commitment to Israel’s security and prosperity and attend a Summit of the Gulf Cooperation Council plus Egypt, Iraq, and Jordan (known as the GCC+3)”, White House Press Secretary Karine Jean-Pierre said in a statement.

He will also meet with counterparts from across the region – Saudi Arabia and West Bank.

The President will begin his travel in Israel, where he will meet with Israeli leaders to discuss Israel’s security, prosperity, and its increasing integration into the greater region. The President will also visit the West Bank to consult with the Palestinian Authority and to reiterate his strong support for a two-state solution, with equal measures of security, freedom, and opportunity for the Palestinian people.

He will then travel to Saudi Arabia, which is the current chair of the GCC. He will attend the GCC meeting where nine leaders from across the region will join him.

Biden is visiting the oil-rich nation at the invitation of King Salman bin Abdulaziz al-Saud. “The President appreciates King Salman’s leadership and his invitation. He looks forward to this important visit to Saudi Arabia, which has been a strategic partner of the United States for nearly eight decades,” the White House said.

Biden seeks to rebuild relations with Saudi Arabia, a country he called a “pariah” during his presidential election campaign.

While in Saudi Arabia, the President will discuss a range of bilateral, regional, and global issues. These include support to the UN-mediated truce in Yemen, which has led to the most peaceful period there since war began seven years ago. He will also discuss means for expanding regional economic and security cooperation, including new and promising infrastructure and climate initiatives, as well as deterring threats from Iran, advancing human rights, and ensuring global energy and food security.

Biden looks forward to outlining his affirmative vision for U.S. engagement in the region over the coming months and years, Karine Jean-Pierre said.

2022 has been a hectic year for Biden with successive foreign tours of diplomacy. His visit to the Middle East region follows meeting with ASEAN leaders at the White House, travel to South Korea and Japan, the Quad Summit, and hosting of the Summit of the Americas last week in Los Angeles.

Biden is scheduled to travel to Europe next week to attend the G7 and NATO Summits.