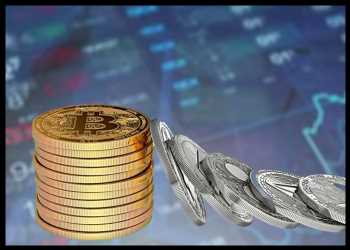 Cryptocurrencies edged up half a percent in the past 24 hours, pushing up market capitalization to the $1.05 trillion level. BNB surged ahead whilst Ethereum, XRP, Cardano, Dogecoin and Solana retreated. Market leader Bitcoin traded with mild overnight gains.

The decline in Ethereum comes amidst reports that Uniswap holders ditched Ethereum for BNB Chain to deploy the v3 protocol. 80 percent of the votes from the Uniswap community was in favor of the V3 protocol to be deployed on the BNB PoS Chain.
The news also boosted the price of BNB (BNB) which is currently trading at $313.31, up 2.8 percent on an overnight basis. The Centralized Exchange (CEX) category also gained close to 2 percent overnight amidst the stellar performance by BNB.

XRP (XRP) declined 1.3 percent overnight despite expectations of a favorable win in its legal dispute with the SEC.

79th ranked Threshold (T) is the top gainer with a whopping 126 percent surge in the past 24 hours. The rally follows the announcement that it would be listed on the Coinbase cryptocurrency exchange. The token has gained 131 percent in the past week and close to 250 percent on a year-to-date basis.