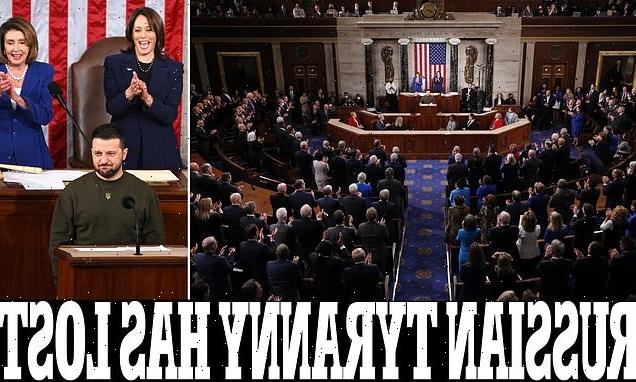 ‘Ukraine is alive and well’: Zelensky makes historic appearance before Joint Meeting of Congress after flying from his country to thank ‘big friend’ US for $45B aid package to battle Putin

Ukrainian President Volodymyr Zelensky told lawmakers who have been funding his country’s war against a brutal Russian invasion that ‘Russian tyranny has lost’ – and that his own country is ‘alive and well.’

His speech came before cheering lawmakers who were on the verge of pushing through another $45 billion in funding to aid his country. It came as he capped off a whirlwind trip to D.C. in a matter of hours, after flying into town Wednesday morning.

‘The Russia tyranny has lost control over us,’ Zelensky told Congress, where he once again appealed to keep U.S. and allied nations together in support of his country.

Zelensky was treated to repeated rounds of applause from Republicans and Democrats – including group of lawmakers who unfurled a Ukrainian flag on the House floor.

‘That’s why we have succeeded in uniting the global community to protect freedom and international law,’ he said, retelling how allied nations rallied to support Ukraine after Russia’s invasion, which he repeatedly cast as a threat to the entire world order. 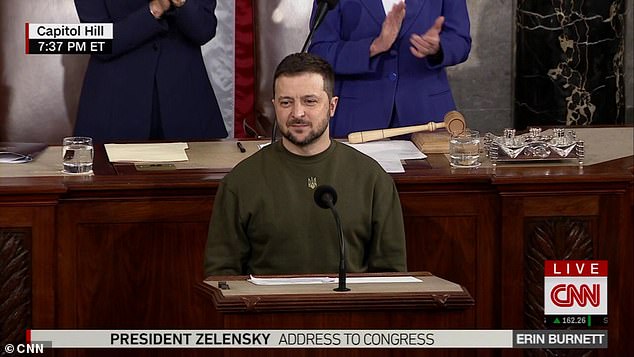 Ukrainian President Volodymyr Zelensky addressed a joint meeting of Congress, and called for further support combatting ‘Russian tyranny.’ He got a rousing welcome from lawmakers who gathered in the House chamber

Zelensky’s address comes as lawmakers are on the verge of voting through another $45 billion in support for his war-torn country.

He ran through descriptions of Russia’s bloody attacks.

‘They sent thugs to the front line,’ he said. He said they ‘destroy everything they see.’

‘We have artillery. Yes, thank you. Is it enough? Not really,’ he said – once again seeking further armaments even as he sought to express gratitude for the flood of weapons.

As he did earlier at the White House, Zelensky tried the tactic of seeking ever more powerful weapons, but with a smile. He sought to push back on any concerns that his country needed Americans to do the fighting for them.

‘I assure you that Ukrainian soldiers can operate American tanks. And planes. Themselves,’ he quipped – re-upping one of his requests from immediately after the February invasion.

‘Your money is not charity. It is an investment in the global security and democracy that we handle in the most responsible way.’

He also appealed to self-interest, describing the war as a way to protect allies and other neighbors from Russian attacks.

Zelensky came to Capitol Hill at the end of a quick visit where President Joe Biden provided repeated assurances that the U.S. would stand with his country as it braces for a long winter under repeated Russian missile and drone attacks.

Biden announced yet another arms transfer totaling $1.8 billion, and Zelensky said he is confident support will continue even as Republicans prepare to take over the House, with some of them expressing skepticism and calling for more oversight of the billions in aid.

Before addressing the Joint Session of Congress, Zelensky was given a brief tour of the Capitol rotunda by Congressional leaders Pelosi, Schumer, and McConnell.

McCarthy, who is currently under pressure from conservatives within his conference – many of whom are skeptical of the U.S.’s aid to Ukraine – appeared to be absent from the public meet-up. 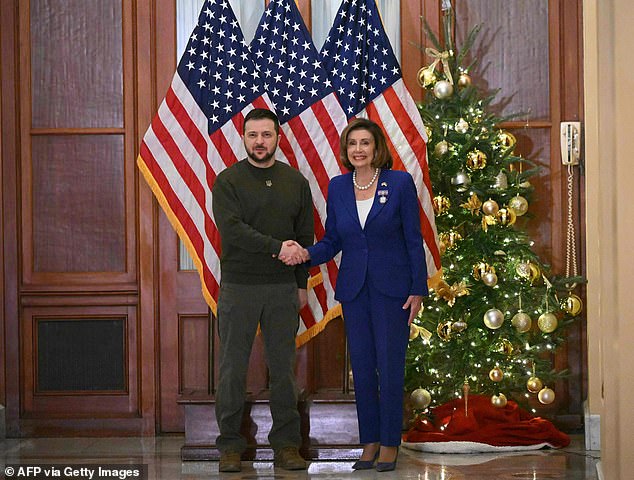 ‘Regardless of changes in the Congress, I believe there will be bipartisan and bicameral support,’ Zelensky told reporters in a press conference earlier Wednesday.

He got yet another public reassurance from Biden, who told him: ‘We will stay with you, for as long as it takes,’ and then made plain that he wouldn’t stop seeking support from his powerful ally, which announced the transfer of Patriot missile batteries to fend off Russian attacks.

‘What is going to happen after the Patriots are installed? After that, we will send another signal to President Biden that we would like to get more patriots.’

It all came after Zelensky traveled to Poland by train, then flew to Joint Base Andrews near Washington aboard a U.S. military aircraft.

He was greeted by President Biden on the South Lawn, got a sit-down in the Oval Office where he presented Biden with a medal of merit, and spoke to reporters in the East Room.

Pelosi billed Zelensky’s Congressional speech to lawmakers, who are themselves about to jet home for the holidays, as a ‘very special evening, which will be etched into history as well as part of your legacy.’

She also called it a moment ‘fraught with meaning.’

‘Here we are today to welcome the brave, courageous President Zelensky in order to praise not only him but the courageous unified people of Ukraine for what they are doing to protect democracy,’ the Speaker said. ‘Over the last 10 months since the invasion, you Mr. President and the Ukrainian people have met Putin’s brutality with a strong will.’

Pelosi also noted that the speech comes just as Congress is weighing their $1.7 trillion omnibus bill which includes the $45 billion in Ukraine aide.

‘Within the next 48 hours, hopefully it will be done,’ Pelosi said.

Reflecting on Zelensky’s presence she also brought up her father, former Rep. Thomas D’Alesandro, Jr. of Maryland, who ‘was a Member of the House in 1941 when Winston Churchill came to the Congress on the day after Christmas to enlist our nation’s support in the fight against tyranny in Europe.’

‘Eighty-one years later this week, it is particularly poignant for me to be present when another heroic leader addresses the Congress in a time of war – and with Democracy itself on the line,’ she said.