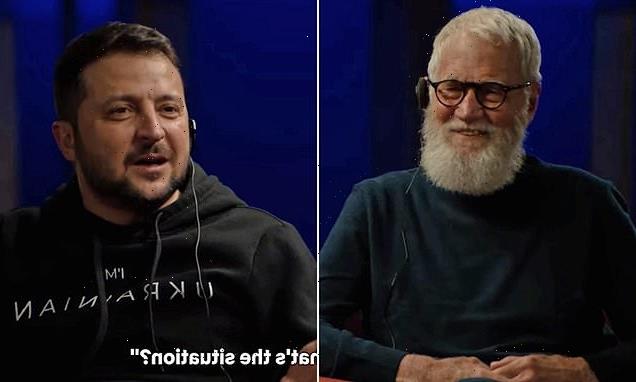 Ukraine’s President Zelensky has made a humourous jibe at Vladimir Putin, taunting the Russian despot in an appearance on a Netflix chat show.

David Letterman’s My Next Guest Needs No Introduction has usually booked guests like Cardi B, Lizzo, and Will Smith – but this time the veteran late night chat show host made his way to Ukraine to interview Volodymyr Zelensky.

In an underground bunker 300ft beneath a Kyiv subway platform, David Letterman, 75, met with the Ukrainian leader to discuss the ongoing conflict in his country.

Zelensky, 44, a popular television comedian before making the unorthodox transition to politician, was keen to poke fun at the Russian leader. 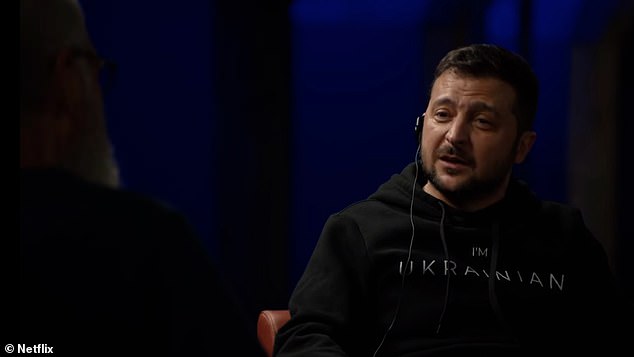 Zelensky, 44, a popular television comedian before making the unorthodox transition to politician, was keen to poke fun at the Russian leader in the interview with David Letterman 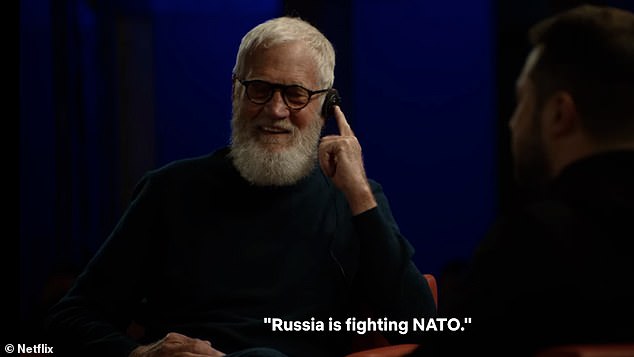 Speaking in Ukrainian, Zelensky, who is Jewish himself, told Letterman his joke mocking Vladimir Putin.

‘Two Jews meet in Odessa. One asks the other: ‘And how is the situation there? What do they say?’

‘Well, what do they say, they say there’s war,’ says the other.

‘Russia is at war with NATO.’

‘Well, the Russians lost 70,000 troops, all rockets were used up, a lot of military equipment was destroyed.’

‘And how about NATO?’

‘Well, what about NATO? NATO has not arrived yet.’

The Ukrainian audience laughed in response to the President’s jibe at Putin.

Zelensky’s joke mocks Russia over propaganda that has refused to call the conflict a ‘war’ and has instead labelled it as a ‘special military operation’.

It also laughs at the fact Ukraine’s forces have been able to quash Russian attacks without the explicit assistance of NATO forces.

The Russian government have categorically underestimated the Ukrainian attack since the invasion in February. Thinking that they would be able to simply role through to Kyiv in February, Putin’s men have been met with blows, being pushed back in areas like Kharkiv and Kherson. 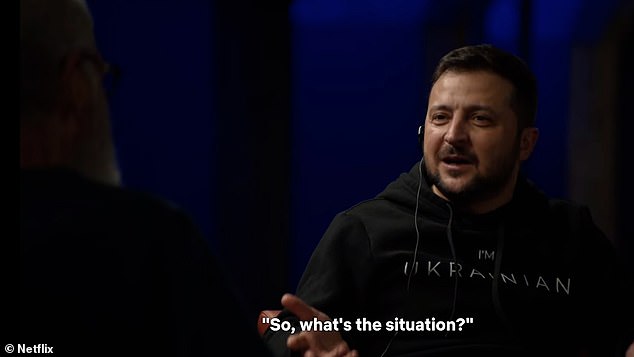 In an underground bunker 300ft beneath a Kyiv subway platform, David Letterman, 75, met with Zelensky to discuss the ongoing conflict in his country.

The Netflix special premiered on December 12. The chat with the Ukrainian leader was filmed in October in an underground bunker with a Ukrainian audience invited to sit in on the interview.

Letterman admitted his apprehension before arriving in Ukraine. ‘When we were planning this trip, I wasn’t sure what to expect,’ the veteran US comedian said in his voiceover before the interview.

‘It had been months since Russian troops were driven out of the city. But just a week ago, Russia launched missiles and drones into Ukraine, including several that hit Kyiv,’ Letterman said in the montage.

At one point in the interview, a siren sounds throughout the bunker. ‘What should we do?’, Letterman asks.

But Zelensky, wearing a black hoodie that reads ‘I’m Ukrainian’, humorously responded: ‘nothing’.

He then reassured Letterman not to panic and explained that this had become a common feature of life in Ukraine.