It’s been, uh, an electrifying year for EVs in America.

Next year could be even better, largely because of a slew of less expensive EVs, which will hit the market along with some new government rules that will make even pricey models affordable.

First, a 2022 overview: Despite supply chain issues and inflation, EV market share nearly doubled in the U.S. In the first ten months of 2022, for instance, EVs accounted for 5.3% of all vehicles sold, compared with 2.9% last year. According to data from Experian, new EV registrations hit 604,638, more than 60% higher when compared with the same period a year ago. (That trend isn't going to change, apparently. Analysts like Adam Jonas of Morgan Stanley see EV share hitting 11% by 2025.)

All that growth is happening despite the fact that most new EVs sales are in the upper tier, $50,000+ price range. “There is still a lot of room to grow in the top half of the segment to achieve portfolio targets without a sub-$30k offering for at least the next decade,” said Bill Newman, SAP North America Head of Automotive to Yahoo Finance.

But the easiest way to grow that EV number, beyond expanding EV charging networks and increasing incentives (which we’ll get too), is offering up more affordable EVs. It's no mystery why. Cars.com’s end-of-year buyers' survey finds that for both male and female consumers, price was the top drawback. Initial cost is the number one concern for 61% of men and 57% of women, per the automotive sales website.

But that sticker shock could be coming to an end. Here’s why 2023 could be the year we’ll see cheaper EVs. Consider: 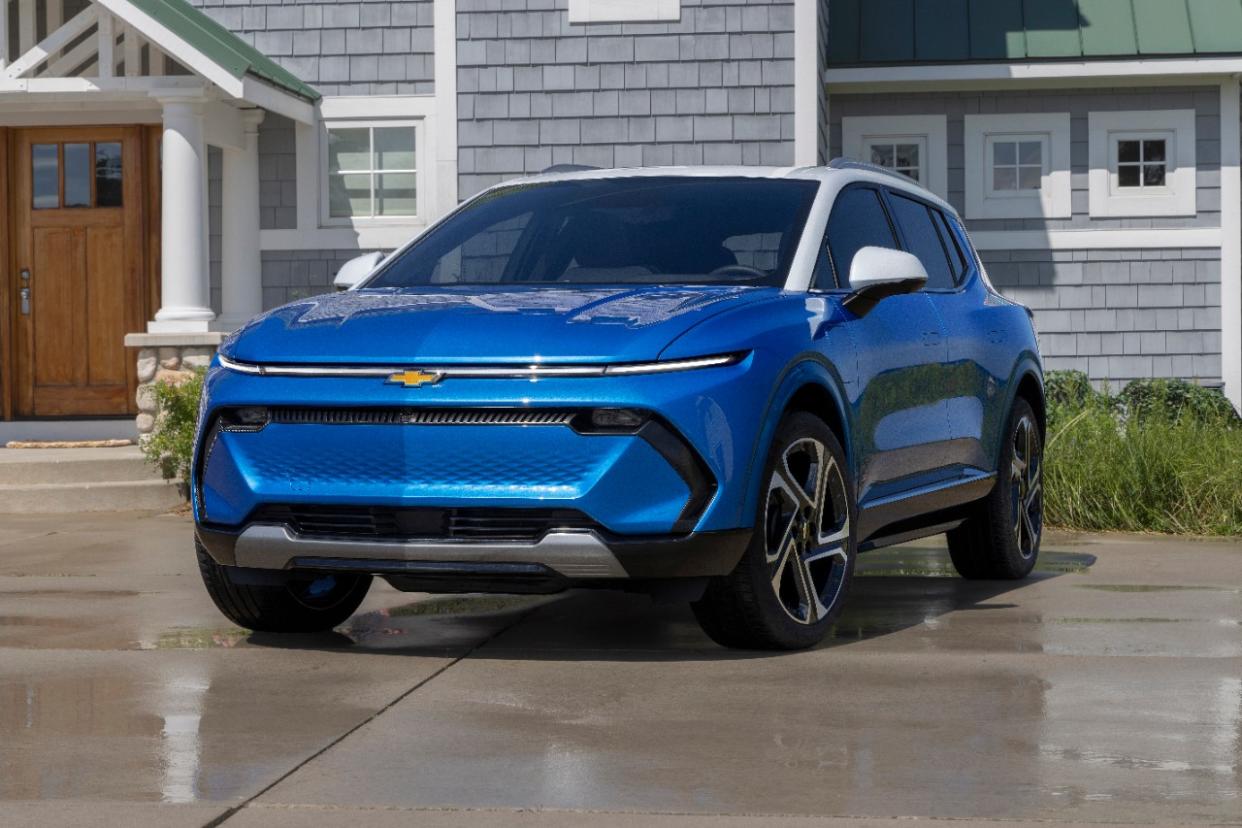 To be sure, there are cheap EVs on the market now. Chevrolet’s Bolt EV is back on sale after a hiatus due to a big battery recall, Nissan’s Leaf has been out for many years, and Hyundai’s Kona Electric has been on sale since 2021. All have starting prices around $30,000.

However the Kona Electric and Nissan Leaf have smaller batteries and limited range. The Bolt is a solid option in the sub $30,000, 250-mile range. And with EV stalwart Tesla not offering anything near that price, there isn’t much in the cheap EV space.

GM’s (GM) big EV rollout starts in 2023, one that will see the brand debut its Chevrolet Equinox EV, which the automaker says will start around $30,000. Along with the Bolt EV, GM will then have two crossover-style SUVs in that $30K price range.

The Chevrolet Blazer EV will come out later in the summer, with prices starting around $45,000 before any incentives. GM will then have its Silverado EV pickup in production in spring of next year, though the cheaper work truck version of the pickup (starting around $39,900) will likely arrive in the back half of 2023. 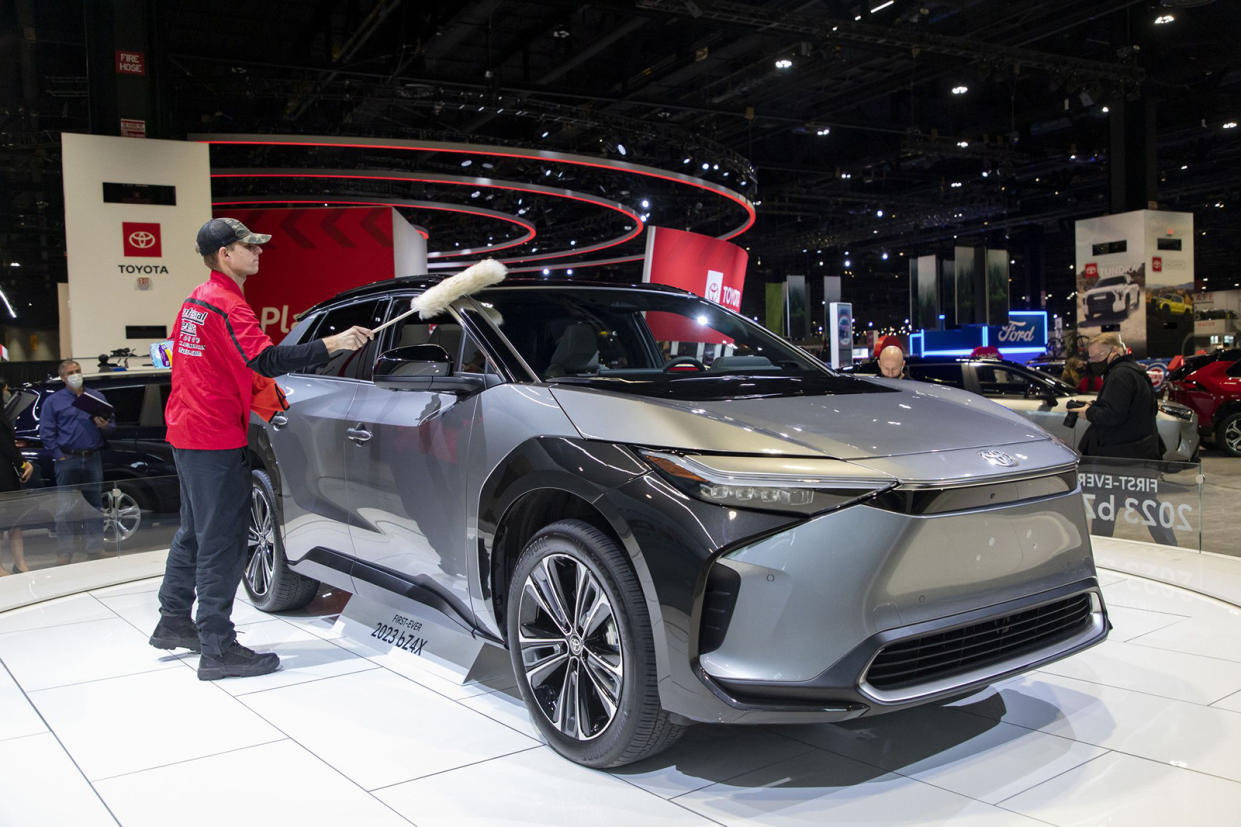 Toyota (TM), which was late to the EV scene and is still mired in an electrification strategy overhaul, finally has its bZ4X hitting showrooms now after being delayed this spring. Though quantities are limited at this time, the car starts around $43,000 and will be rolling out in force next year.

Speaking of delayed cars, Nissan will also have its well-received Ariya CUV EV coming to US showrooms—finally— in early 2023. The Ariya, a joint design project with Nissan teams in Japan and Europe, features a sleek design and almost-luxury level interior in higher trims.The Ariya in entry level Engage trim starts at a reasonable $43,190. 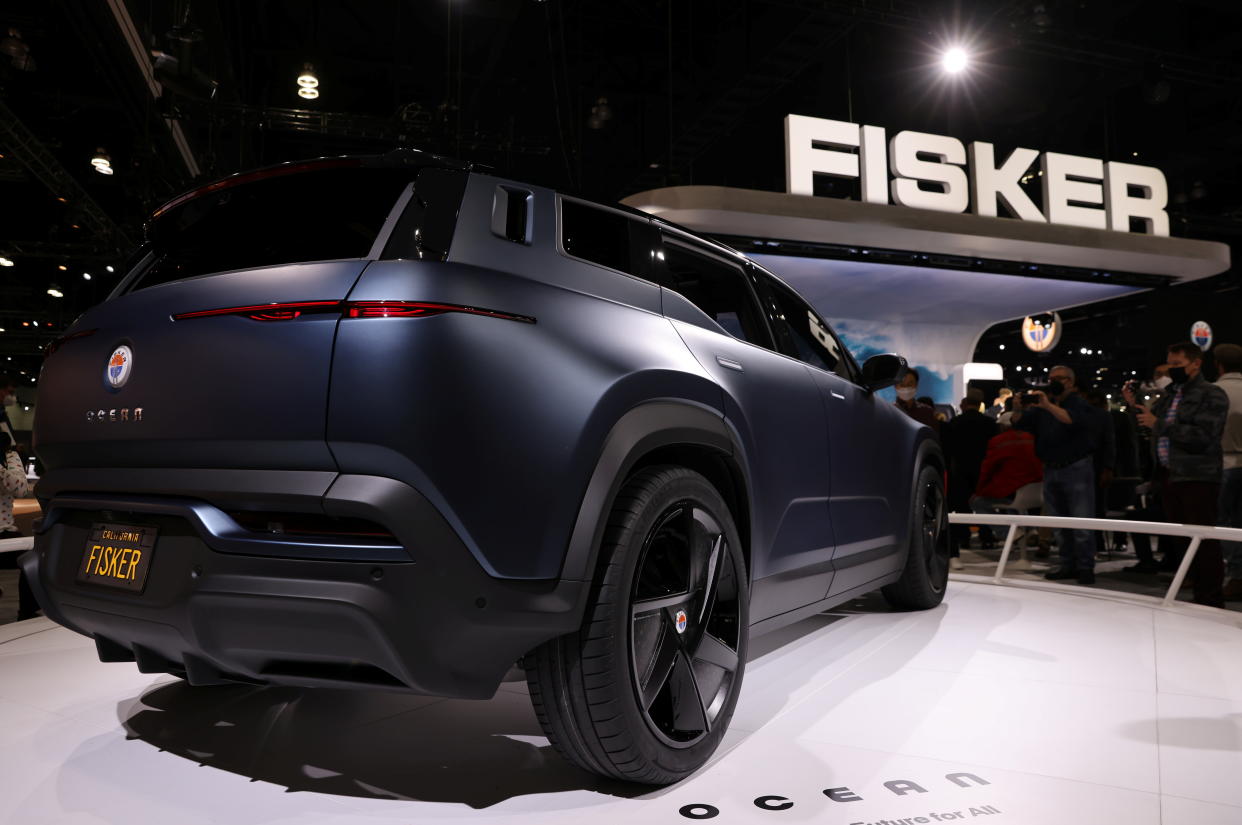 While the traditional automakers are coming onboard, upstart Fisker (FSR), led by the contagiously energetic Henrik Fisker, is aiming for a big 2023.

The Fisker Ocean EV SUV is already in production at its plant in Graz, Austria. While the initial “Ocean One” launch model will be the pricey $69,000 version, we’ll see other models come out next year including the entry level “Ocean Sport,” which will start at $37,499.

Will Tesla finally weigh in with a lower-priced EV?

Tesla (TSLA) operates in the premium luxury space; its cheapest offering is the Model 3 rear-wheel drive sedan at $46,990. CEO Elon Musk has claimed he will finally reveal the company’s sub $30,000 robotaxi next year. But it likely won’t go into production for at least a year. 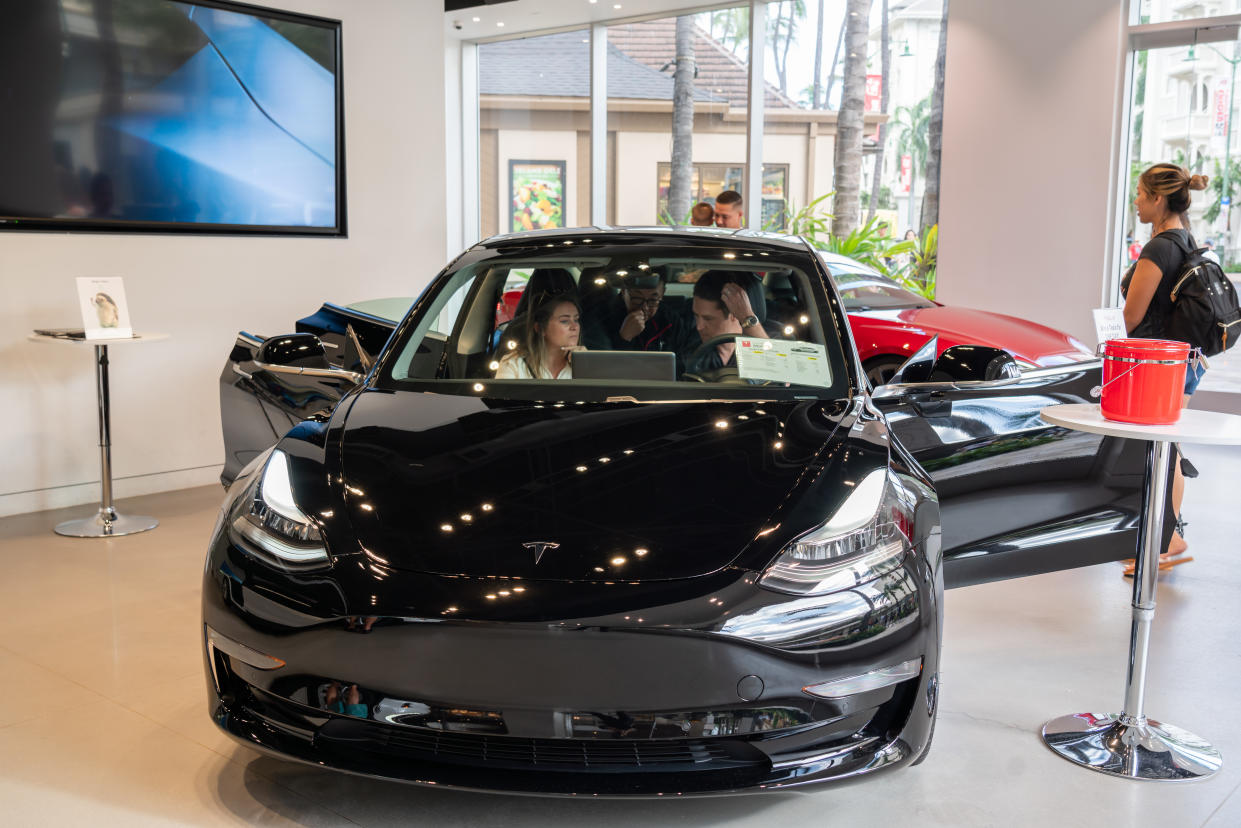 Consumers can also get at a cheaper EV thanks to some tweaks by lawmakers in the U.S.

While the Inflation Reduction Act’s consumer tax credit for EVs is currently in effect for cars assembled in North America, some coming changes will benefit two big automakers – Tesla and GM.

Tesla and GM are currently phased out of the tax credit based on older rules, but starting on January 1st the two automakers will be allowed to participate again in the program, with buyers getting the full $7,500 off of qualified EVs. That's party due to the Treasury Department delaying a domestic materials requirement for batteries. (For more, click here.) 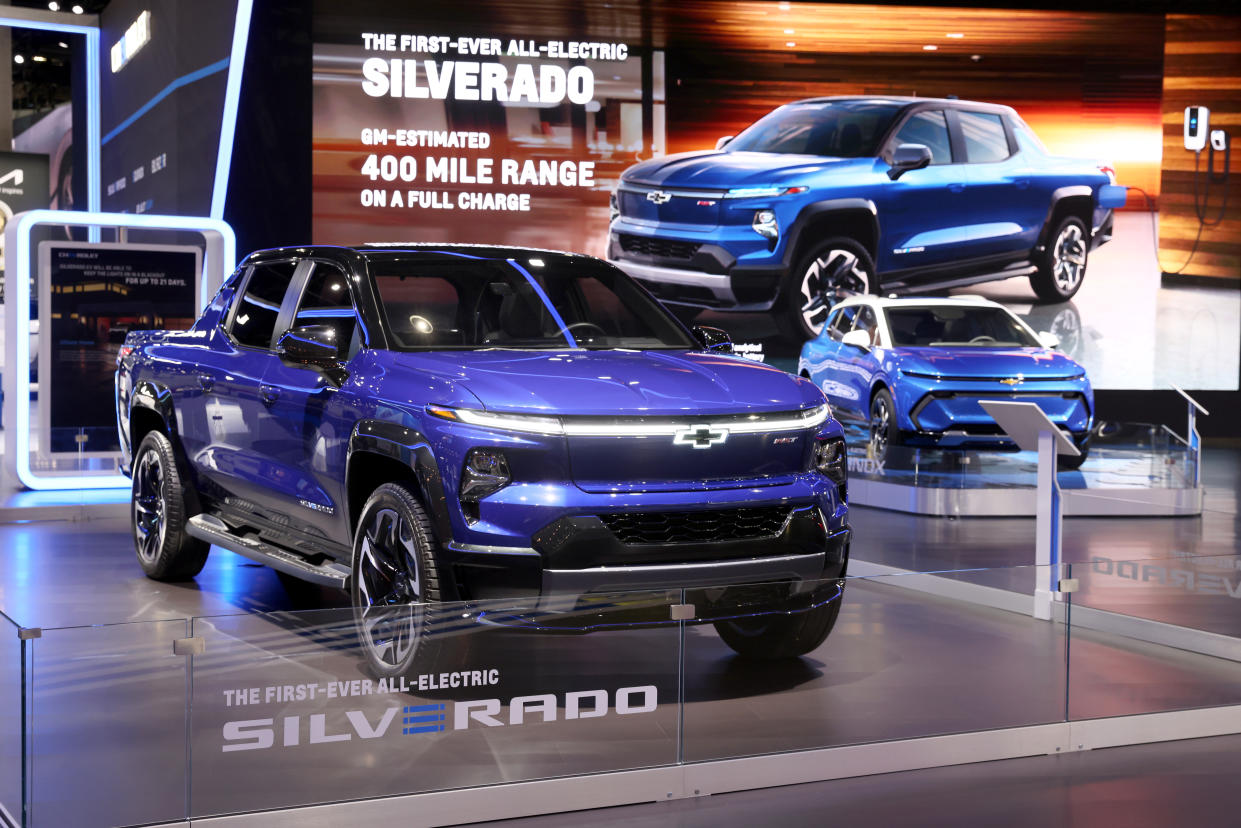 This is all good news for Tesla and GM. The Tesla Model 3 rear-wheel drive, with the full federal tax credit of $7,500, would be below $40K. And GM’s Bolt EV and upcoming Equinox could start at prices well under $30K. Both Tesla and GM can produce these models in mass quantity (with GM actually increasing production of the Bolt for next year.)

Others that will ride the wave of the IRA: the Ford F-150 Lightning Pro and the upcoming Silverado EV work truck, the cheapest EV pickups in the market in 2023.

In addition, the IRA allows commercial vehicles to qualify for the full-tax credit, regardless of manufacturing location. The Lightning, Silverado, Ford’s E-transit electric van, and even Mercedes' eSprinter Van and others used for commercial purposes for a business would qualify for the full credit, bringing those sales down even further.

Bottom line: the era of the cheap, or cheaper, EV may be upon us.

Click here for the latest stock market news and in-depth analysis, including events that move stocks

Download the Yahoo Finance app for Apple or Android