Every week throughout the season we’ll give you a college football viewing guide by highlighting the five best games of the coming weekend. We will pick those five games against the spread and highlight some other matchups that caught our eye from a betting perspective.

On the whole, Week 1 did not disappoint. While there were a few games that were nowhere near as close as anticipated, there were plenty that came down to the wire to get the 2022 season off to an exciting start.

But now it’s time to turn the page to Week 2. There aren’t as many high-profile matchups on tap, but there are plenty of intriguing games sprinkled throughout the day on Saturday to keep our attention.

You never know where a surprising upset could emerge.

No. 1 Alabama at Texas

Week 1 was a walk in the park for Alabama, the top-ranked team in the country. The Crimson Tide cruised past Utah State 55-0, putting up 559 yards of offense in the process. Bryce Young, the reigning Heisman Trophy winner, threw for 195 yards, rushed for 100 yards and accounted for six total touchdowns in the win. Alabama should experience a bit more resistance in Week 2 with a trip to Austin to face Texas.

The Longhorns took care of UL Monroe without much issue in Quinn Ewers’ debut as UT’s starting quarterback. It will be a whole different level of competition with Alabama coming to town, but UT coach Steve Sarkisian spent three seasons on Nick Saban’s staff. He’ll have an idea of what’s coming. Whether his team can compete with the Crimson Tide for four quarters remains to be seen. With nearly a three-TD point spread, just keeping this competitive would be a sign of progress for Texas.

Josh Heupel and his up-tempo offense brought a much-needed jolt of life to the Tennessee program. The Vols scored a lot of points in 2021 but didn’t have the defense to match it. If the defense can take a step forward, Tennessee has the chance to make some noise in the SEC. After a season-opening blowout over Ball State, this weekend’s trip to face Pitt, the defending ACC champions, will be a good test for the Vols.

Pitt showed in a Week 1 rivalry win over West Virginia that its offense is going to be different from the one that featured Kenny Pickett and Jordan Addison a year ago. The Panthers still mixed in shotgun throws for new QB Kedon Slovis, but heavily featured under center runs with multiple tight ends and even a fullback. Results were mixed. How will Pitt fare against the Vols?

Before 2018, Florida had won 31 consecutive matchups with Kentucky. However, Kentucky has won two of the last four in the series, including a 20-13 win last fall in Lexington. Can the Wildcats do it again? UK fans are full of optimism after the team won 10 games last year. There’s a lot being replaced from last year’s squad, but Will Levis is back for another year at quarterback. A projected first-round pick, Levis is an athletic big body with a rocket arm, but he can be a bit inconsistent with accuracy.

On Saturday night in Gainesville, Levis will face off against another excellent quarterback, Florida’s Anthony Richardson. Richardson was instrumental in the Gators’ season-opening win over Utah. Richardson threw for only 168 yards but was electric on the ground, racking up 106 yards and three touchdowns on just 11 carries. If Richardson plays at a high level, Florida can be much better than many expected in its first season under Billy Napier. 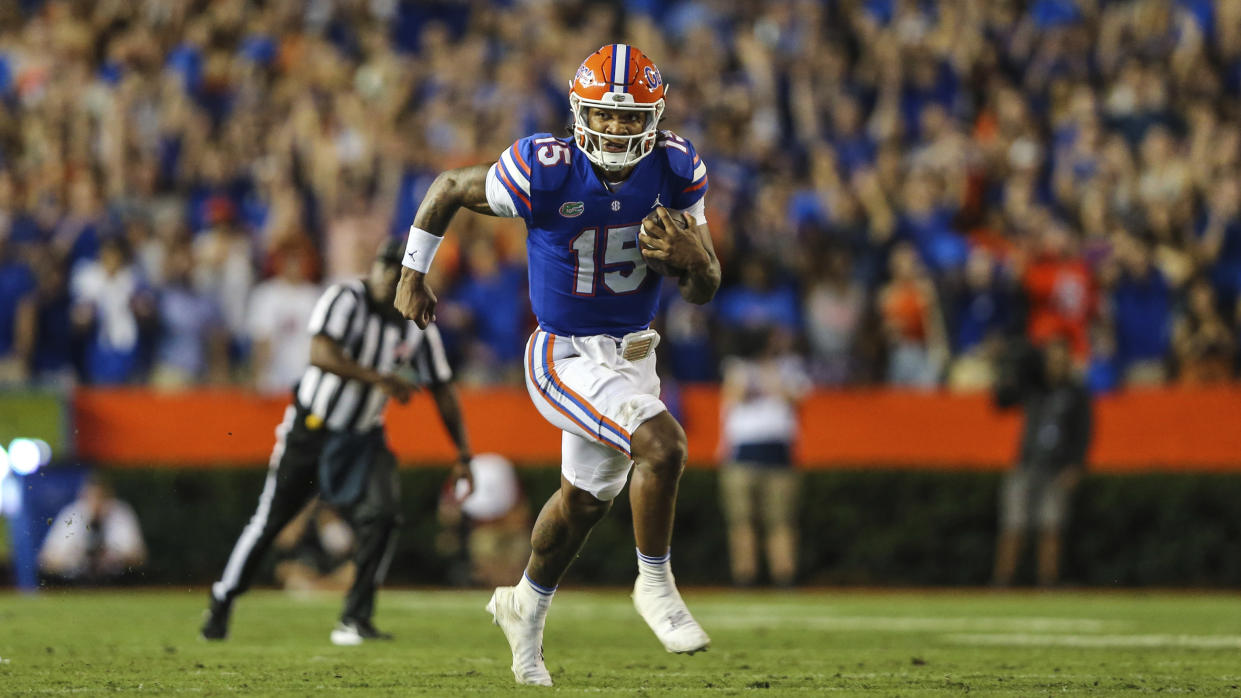 USC kicked off the Lincoln Riley era with a blowout victory over Rice. While the offense put up 538 yards, it was actually the Trojans’ defense that blew the game open by returning three interceptions back for touchdowns. Rice was able to move the ball quite a bit in the first half but was completely doomed by turnovers in the second half. USC QB Caleb Williams, meanwhile, threw for 249 yards and two TDs in the 66-14 win.

Williams will make his debut in Pac-12 play at Stanford on Saturday. He’ll be opposed by another future NFL quarterback in Tanner McKee. McKee hasn’t gotten much help on offense during his time as the starter, but the Cardinal are hopeful that E.J. Smith can develop into their next great running back. The son of NFL legend Emmitt Smith, E.J. Smith rushed for 118 yards and two TDs in a season-opening win over Colgate.

After winning a Big 12 title with Gerry Bohanon, Baylor coach Dave Aranda did something gutsy. He made a quarterback change, naming Blake Shapen the starter over Bohanon during spring practice. Bohanon has since transferred, so it’s Shapen’s show heading into Saturday night’s showdown with a really good BYU team that also happens to be a future member of the Big 12. In addition to the QB change, Baylor is replacing a slew of excellent players on defense. Will new contributors be ready for an early-season road challenge?

While Baylor blew out an FCS team in Week 1, BYU traveled across the country and dominated South Florida, 50-21. The Cougars were up 28-0 by the end of the first quarter and never looked back. It was an early-season statement for a program with several high-profile games on its schedule this year. In addition to facing Baylor, BYU has Oregon, Notre Dame and Arkansas on the horizon. Win a few of those games and the Cougars could climb pretty high in the rankings. 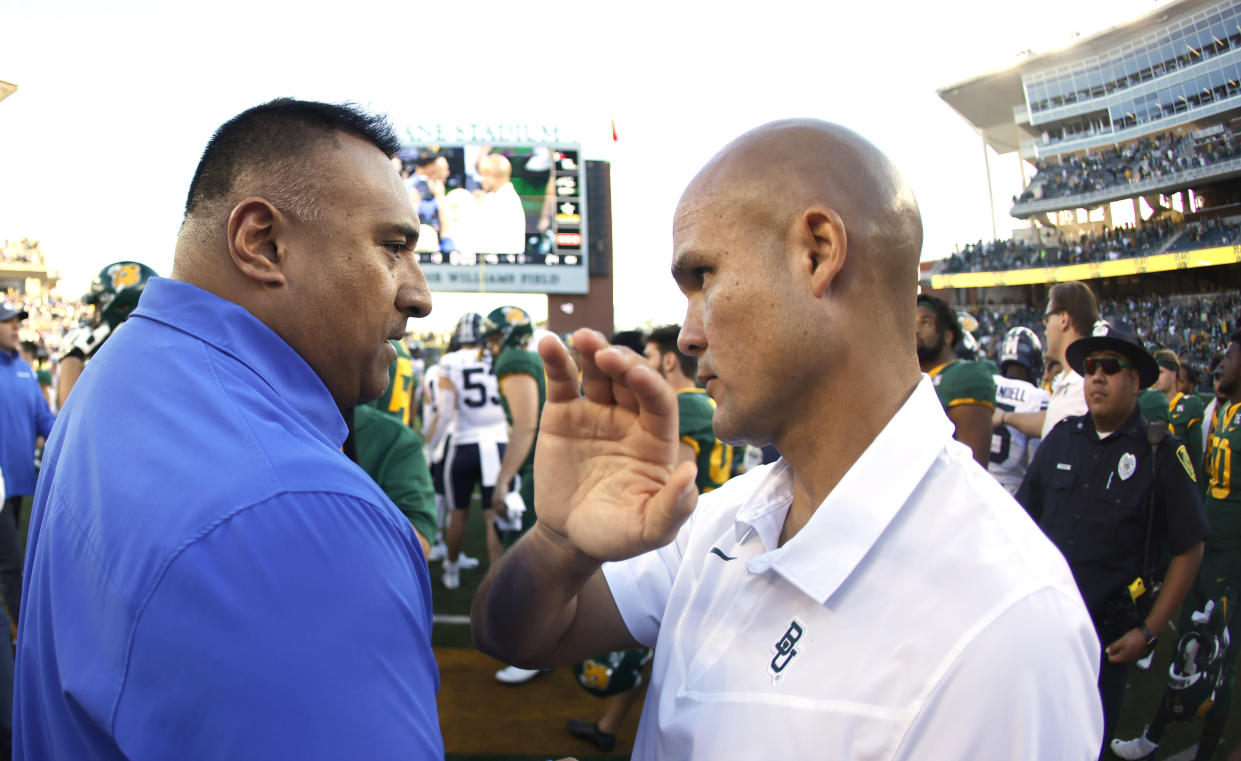 Duke at Northwestern (-10): Duke’s defense looked fantastic in its debut for Mike Elko and Northwestern took advantage of some Nebraska mistakes in Week 0. This feels like a game where the first team to 30 wins and I’m not convinced that either team will hit that number anyway. Pick: Under 58.5

Wake Forest (-12.5) at Vanderbilt: The news of Sam Hartman’s return makes this one an easy pick for me since the spread is within 14 points. While Vanderbilt is improved, Wake is a top-25 team with Hartman at QB and I don’t think he’ll have any issues with rustiness. Pick: Wake Forest -12.5

South Carolina at No. 16 Arkansas (-8.5): I know Arkansas had some key defensive injuries in the win over Cincinnati, but I’m not sure South Carolina can take advantage of it. The Gamecocks struggled on offense against Georgia State, Spencer Rattler included. Arkansas is going to be able to run with a lot of success. Pick: Arkansas -8.5

UNLV at Cal (-13): Cal was not impressive in its Week 1 win over UC Davis, backing up some concerns I had about the Golden Bears in the offseason. Cal has not been good as a favorite under Justin Wilcox and I think UNLV has enough skill on offense to cover this number. Look out for Michigan State transfer Ricky White at receiver. Pick: UNLV +13

For other Week 2 picks from Sam Cooper, click here.