A Virginia woman was caught with giraffe and zebra bones at a Washington, D.C.-area airport last month after arriving home from a trip to Africa, according to U.S. Customs and Border Protection officials.

The bones were discovered in the woman’s luggage at Washington Dulles International Airport on Nov. 10, officials said. 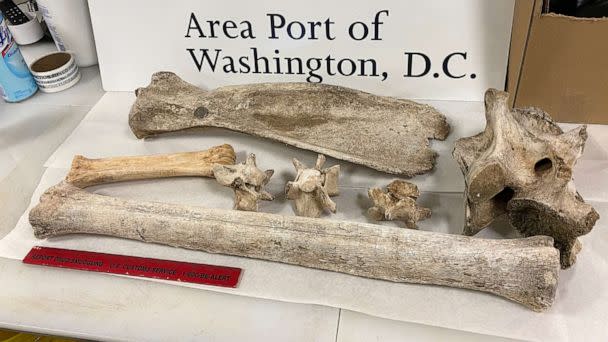 The woman initially declared that she had a small Acacia tree twig, though later mentioned the bones after CBP agriculture specialists X-rayed her baggage and “discovered an anomaly,” CBP said. The woman reportedly found the bones in Kenya and wanted to keep them as souvenirs.

CBP detained the bones, which were subsequently examined by U.S. Fish and Wildlife Service inspectors and deemed to be in violation of international law governing the transport of endangered species, officials said. CBP has since seized the bones.

“I can appreciate travelers wanting to keep souvenirs of their vacations, but those souvenirs could violate United States or international law, or potentially expose our families, pets or our nation’s agriculture industries to serious animal or plant diseases,” Kim Der-Yeghiayan, acting area port director for CBP’s Area Port of Washington, D.C., said in a statement. “Customs and Border Protection strongly encourages all travelers to know what they can and cannot pack in their baggage before returning to or visiting the United States and to declare all items upon arrival.”

The woman, a resident of Fauquier County, was not criminally charged, officials said.