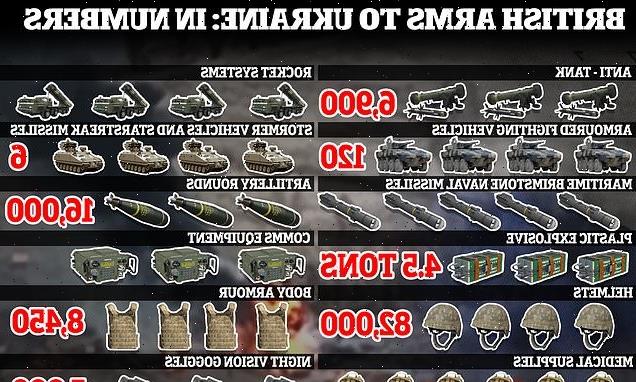 The British arms giving Putin a bloody nose: How UK has helped Ukraine with £2.3BN of military aid from anti-tank missiles to tanks and night vision goggles

Boris Johnson’s Government has provided more than £2billion of arms to wartorn Ukraine including anti-tank missiles and night-vision goggles, and plans to send hundreds of drones and anti-tank weapons in the coming weeks to help the European democracy fend off Putin’s war of aggression.

It plans to bolster Ukraine’s existing Soviet-era artillery with more than 20 M109 155mm self-propelled guns, 36 L119 105mm artillery guns, and in excess of 1,600 anti-tank weapons and hundreds of loitering aerial munitions in the coming weeks, the MoD added.

The Defence Secretary said in a statement: ‘The scale and range of equipment we are providing demonstrates the strength of our resolve. Together with our international partners, we will ensure Ukraine has the tools to defend their country from Putin’s illegal invasion.’

The war looks set to be taking a drastic new turn after Putin’s attack dog Sergei Lavrov confirmed that Moscow’s war aims now go beyond the Kremlin-backed Donbas region in the east and include Kherson and neighbouring Zaporizhzhia in the south. 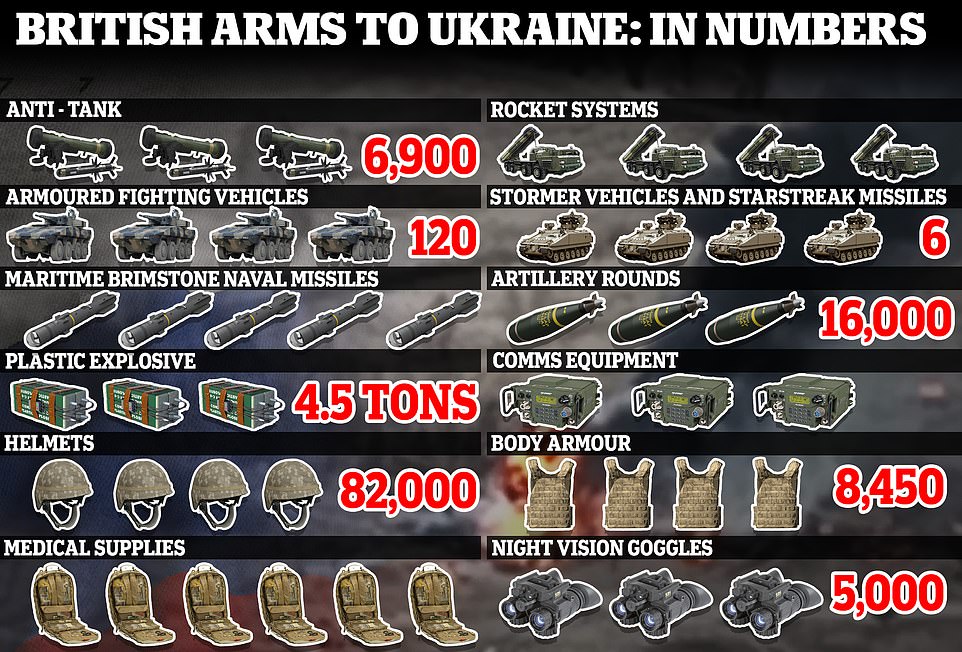 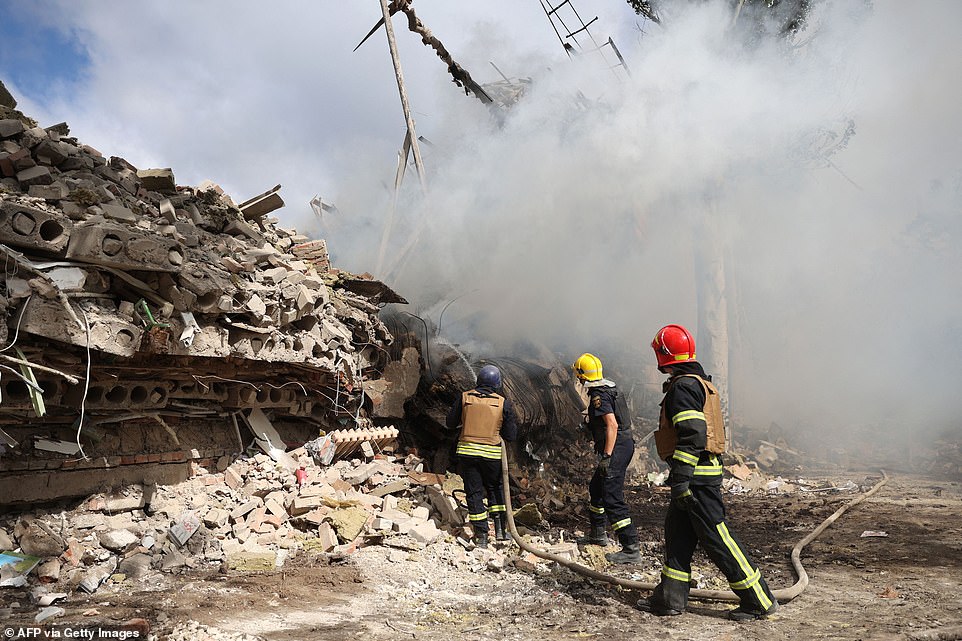 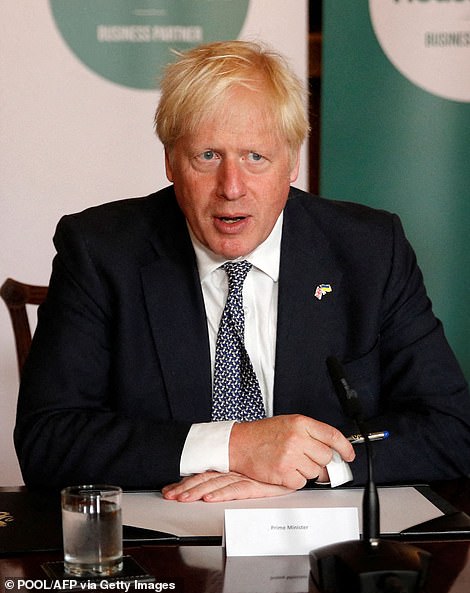 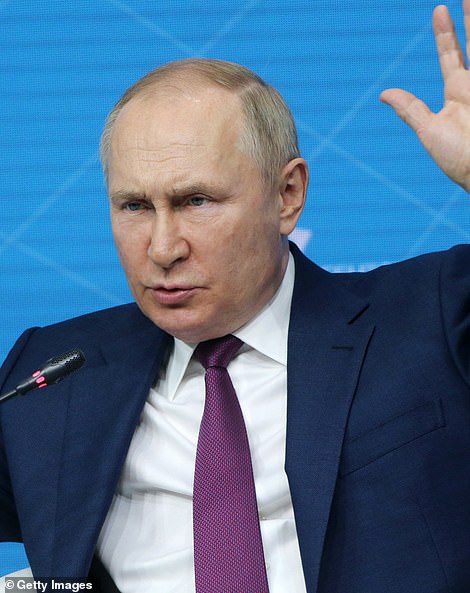 In the nearly five months since Putin’s men invaded Ukraine, 1,700 tanks have been destroyed by Ukrainian forces who have been able to inflict heavy losses on the Russian army thanks to advanced Western weaponry and tactics.

Ukrainian armed forces said today they had killed 111 Russian soldiers in the south and east over the past day, as comments from Russia’s foreign minister showed the Kremlin’s goals had grown during the five-month war.

Russia classifies military deaths as state secrets even in times of peace and has not updated its official casualty figures frequently during the war.

The Ukrainian military reported heavy and sometimes fatal Russian shelling in the east and south of the country amid what its said were largely failed attempts by Russian ground forces to advance in the eastern Donetsk region.

Donetsk regional governor Pavlo Kyrylenko said Russian missile strikes had destroyed two schools in the cities of Kramatorsk and Kostiantynivka and had also hit the city of Bakhmut but there was no information yet on casualties.

Russia says it does not deliberately target civilians and uses high precision weapons to degrade Ukrainian military targets, but the war has flattened cities, particularly in Russian-speaking areas in the east and southeast of Ukraine.

The mayor of Kharkiv, Igor Terekhov, in his Telegram channel said that one of the most densely populated areas of the city was being shelled and asked people not to leave shelters. Oleh Synehubov, governor of the Kharkiv region, said two people had been killed and 19 wounded, four of them seriously.

Vitaly Kim, governor of the southern Mykolaiv region, said the region had been targeted with seven S-300 missiles. One person had been wounded, he said, and infrastructure, energy facilities and storage facilities damaged.

CIA Director William Burns said on Wednesday that the United States estimated that Russian casualties in Ukraine had so far reached around 15,000 killed and perhaps 45,000 wounded and that Ukraine has suffered what he called significant losses too.

Scotching persistent speculation that Putin may be suffering from health problems, Burns also said that the Kremlin chief was healthy as far as he knew.

‘Russia is prioritising the capture of critical national infrastructure, such as power plants,’ the ministry, which supports Ukrainian forces, said in a regular bulletin. 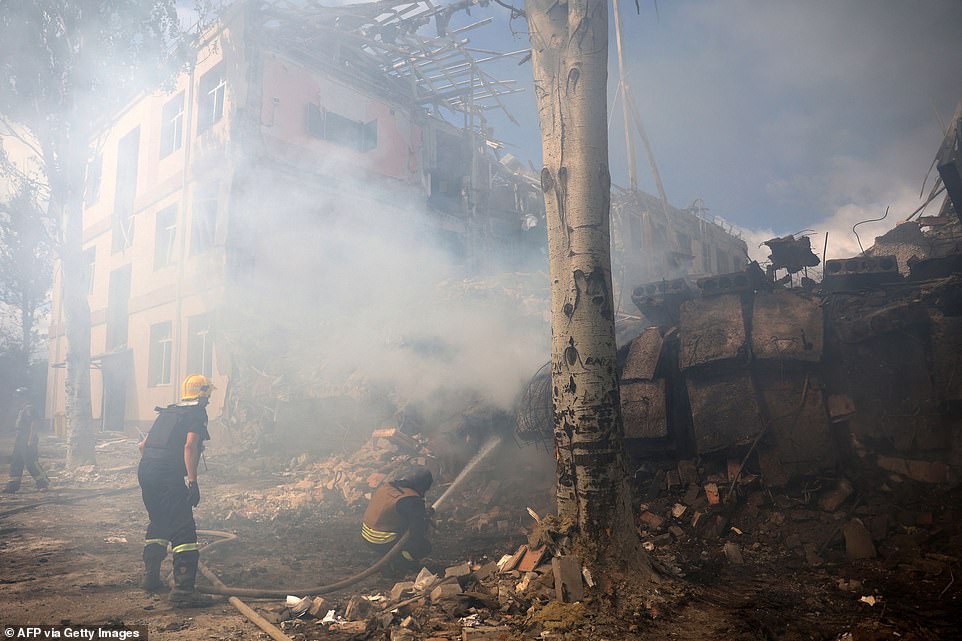 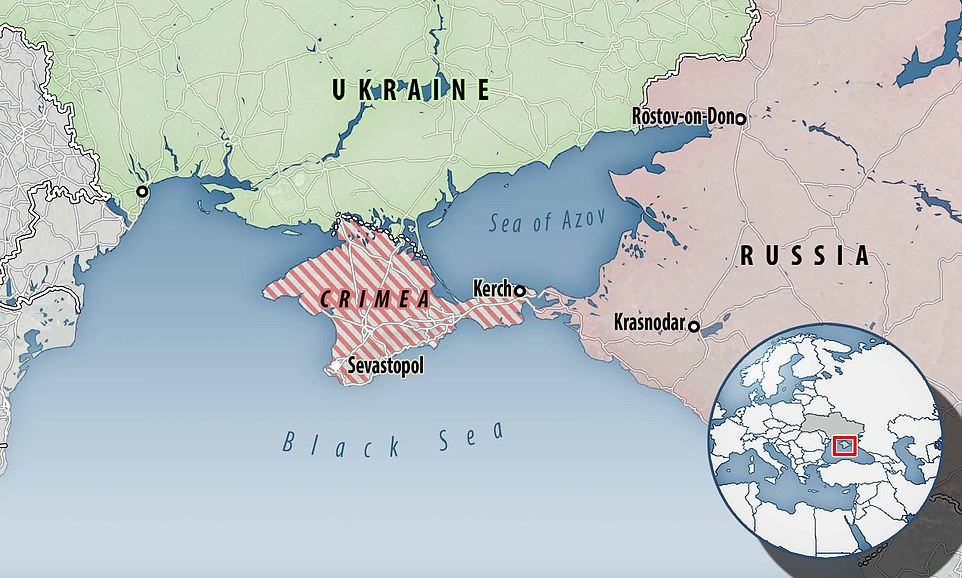 Russia annexed Crimea in 2014 after a military intervention by pro-Russian separatists and Russian Armed Forces. That was followed by a controversial Crimea-wide referendum, illegal under the Ukrainian and Crimean constitutions, whose official results showed over 90% support for reunification

It said taking the power plant, a Soviet-era coal-fired facility, was also probably part of Russia’s attempt to regain momentum as it tried to advance towards the key cities of Kramatorsk and Sloviansk in eastern Ukraine.

It comes as Russian gas began flowing to Europe via a major pipeline after a pause – but the gas flow was expected to fall well short of full capacity and the outlook was uncertain.

The resumption of gas flows via the Nord Stream 1 pipeline to Germany ended a nerve-jangling 10 days for Europe in which politicians expressed concern Russia might not restart them at a time when alternative energy supplies are tight and prices high.

The pipeline has traditionally carried more than one third of Russia’s gas exports to Europe but was operating at only 40% of its capacity after Kremlin-controlled Gazprom cut gas exports in a row over the repair of a turbine.

European Union Commission President Ursula von der Leyen has accused Russia of trying to blackmail Europe by using energy as a weapon, something Moscow, which is unable to swiftly redirect all of its gas to other markets, has denied. read more

Moscow has criticised EU and US sanctions on Russia over its February 24 invasion of Ukraine and military help to Kyiv, saying it had to undertake what it calls a ‘special military operation’ to prevent NATO using Ukraine to threaten Russia.