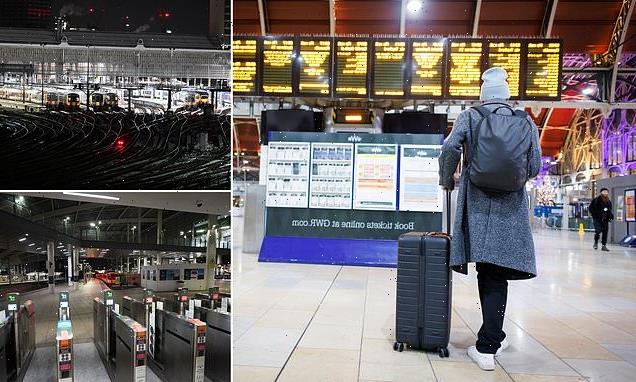 Unions plunge UK into train strike hell: First day of month-long chaos begins as up to 40,000 rail staff walkout after RMT rejected 11th hour deal to spare commuters… but many will just WFH

Britons are facing fresh misery today as a month of rail strikes begin with railway staff walking out for their first of a wave of 48-hour strikes.

Up to 40,000 members of the Rail, Maritime and Transport union (RMT) are pressing ahead with two 48-hour strikes at Network Rail – and 14 train companies – from Tuesday and Friday.

Trains will run from 7.30am to 6.30pm on this week’s strike days, although many parts of the country will have no services, including most of Scotland and Wales. 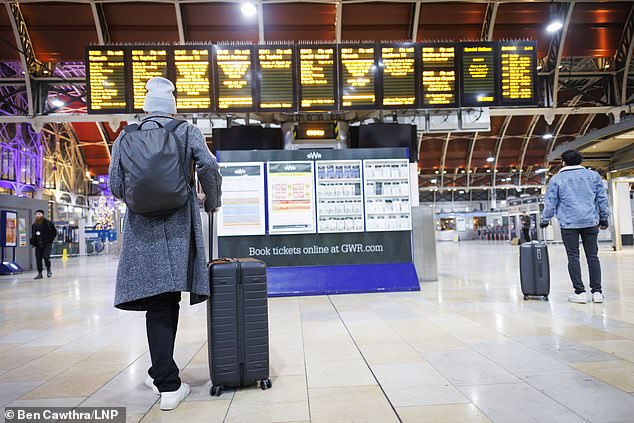 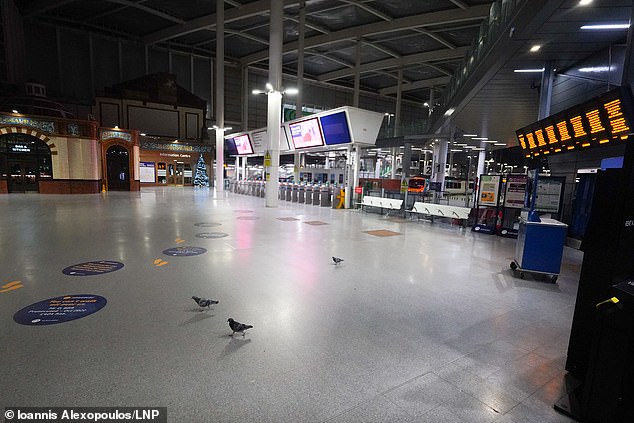 The RMT union’s decision to reject a new pay deal which, along with heavy snow, threatens to grind the country to a halt through the festive period, means millions of workers now expected to work from home until the new year.

Network Rail has warned there will be significantly reduced services, with trains more crowded and likely to start later and finisher earlier until January 8.

Britons had to sacrifice seeing loved ones over the holiday period in 2020 and 2021 due to the coronavirus pandemic – but now face having to do the same due to rail disruption.

As a result, some may be feeling increasingly resigned to only seeing their loved ones via Zoom or other video conferencing tools once again – laying waste to a third Christmas in a row. 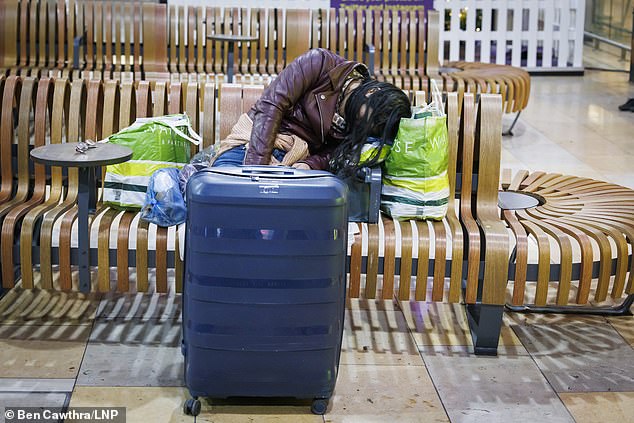 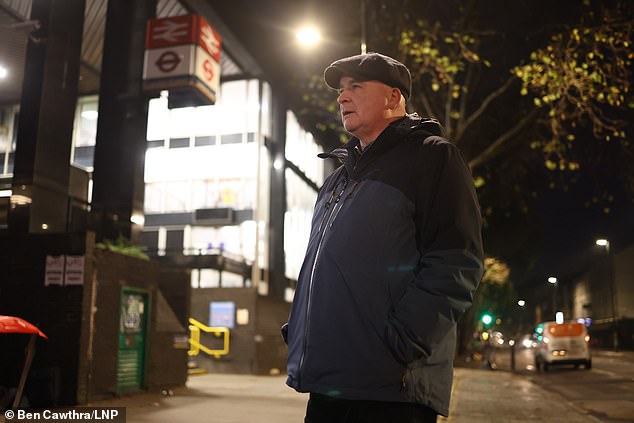 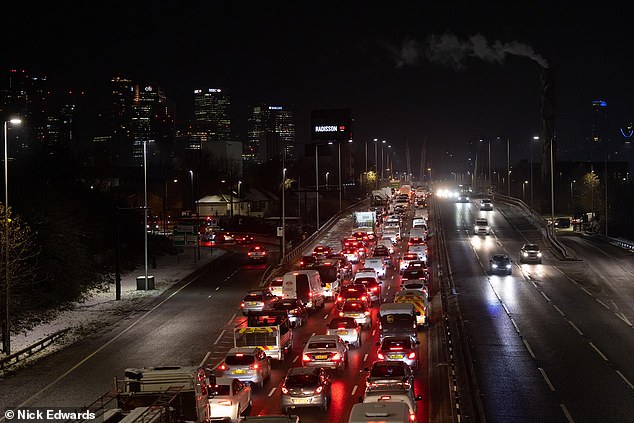 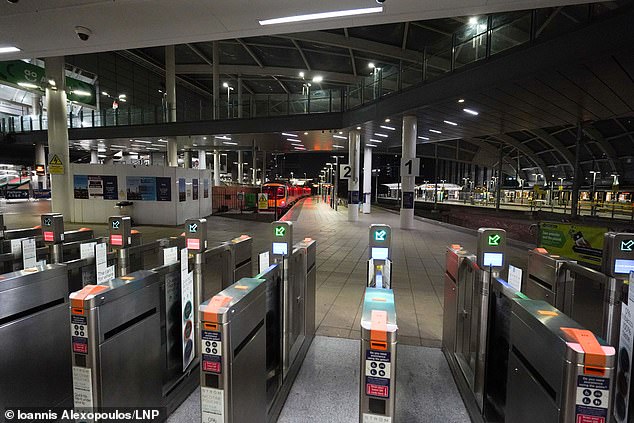 Meanwhile, talks to avert the nursing strike have failed after the union leader behind the action accused Health Secretary Steve Barclay of “belligerence” and refusing to discuss pay.

Royal College of Nursing (RCN) general secretary Pat Cullen said nurses were “not getting an extra penny” despite their talks on Monday.

Nurses in England, Wales and Northern Ireland now seem set to begin their first day of strike action on Thursday, with a second date set for Tuesday. 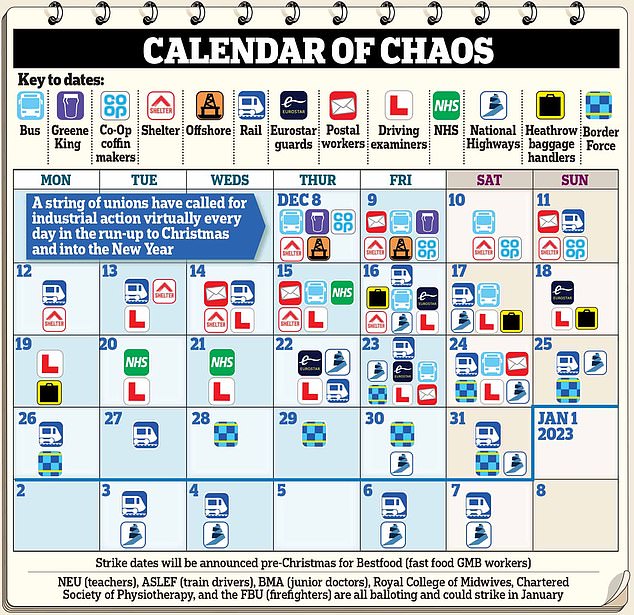 December’s ‘Calendar of Chaos’ with strikes happening across several sectors

Cabinet minister Oliver Dowden warned the Government “cannot eliminate” the risks of a wave of strike action throughout the month after chairing an emergency Cobra meeting on Monday.

He said ministers will be “straining every sinew” to minimise the disruption, with paramedics, postal workers and border officials among those scheduled to walk out.

Health minister Will Quince admitted that taxis could be used to transport patients during ambulance strikes on December 21 and 28.

He told MPs it is “likely” that category one and two calls “where there is an immediate threat to life will be responded to”.

But he added: “We are looking at ways in which we can provide additional support for category three and category four, including things such as block-booking taxis and support through community healthcare, local authority fall services and community support.”

In the rail strikes, the RMT said 63.6% voted to reject Network Rail’s offer on an 83% turnout in what general secretary Mick Lynch said was a “huge rejection” of the public body’s “substandard offer”.

“The Government is refusing to lift a finger to prevent these strikes and it is clear they want to make effective strike action illegal in Britain,” the union boss added.

Who is striking over Christmas and when is it happening?

· Heathrow, Gatwick, Manchester, Birmingham, Cardiff and Glasgow will be hit

“We will resist that and our members, along with the entire trade union movement, will continue their campaign for a square deal for workers, decent pay increases and good working conditions.”

A strike by members of Unite at Network Rail will not go ahead after they voted to accept the offer.

Network Rail had offered a 5 per cent pay rise for this year – backdated to January – with another 4 per cent at the start of 2023 and a guarantee of no compulsory job losses until January 2025.

The RMT’s executive recommended rejecting the offer, saying it was linked to “significant” changes to working practices.

RMT workers at Network Rail will also strike from 6pm on Christmas Eve until 6am on December 27.

Talks between Mr Barclay and Ms Cullen failed to find a breakthrough, with the Health Secretary refusing to negotiate on pay.

“The Government was true to its word – they would not talk to me about pay,” the RCN boss said in a statement.

“I needed to come out of this meeting with something serious to show nurses why they should not strike this week. Regrettably, they are not getting an extra penny.

“Ministers had too little to say and I had to speak at length about the unprecedented strength of feeling in the profession.

“I expressed my deep disappointment at the belligerence – they have closed their books and walked away.”

The union is demanding a pay rise of 5% above the RPI rate of inflation, which was 14.2% in October, but Ms Cullen has hinted that she could compromise if the Government negotiates on pay.

Mr Barclay has been sticking with the independent pay review body’s recommendation of a £1,400 raise.

He was under increasing pressure to settle a deal after strikes by ambulance staff and some NHS workers in Scotland were called off after members of two unions voted to accept the Scottish Government’s recent pay deal.

Unite and Unison members called off action after negotiations with Health Secretary Humza Yousaf and the intervention of First Minister Nicola Sturgeon.

The new deal would mean NHS workers in Scotland would remain the best-paid in the UK and workers would get pay rises ranging from £2,205 to £2,751.

A Department of Health and Social Care spokesman said Mr Barclay “again listened to the RCN’s position on pay and reiterated the Government has agreed to the recommendations of the independent pay review body”.

“He said that any further pay increase would mean taking money away from frontline services and reducing the 7.2 million elective backlog,” the official added.

Meanwhile, Mr Dowden, the Chancellor of the Duchy of Lancaster, chaired the meeting of the Government’s emergency response committee, with military figures in attendance.

He reiterated pleas for workers to call off action to “give families a break” but admitted contingency plans to use troops to help fill the gaps will not be enough to “remove all risks”.

“Of course, this Government will be straining every sinew to make sure that we minimise those risks, but we cannot eliminate them,” he told broadcasters.

“The fair and reasonable thing for the unions to do particularly in a time when winter is biting, we’re suffering from the consequences of Ukraine and indeed the Covid situation, to call off those strikes, give families a break, particularly over winter time.”

A wave of strikes by nurses, paramedics, rail workers and Border Force staff this month is expected to cause mass disruption, with thousands of NHS operations and appointments cancelled.

The military and civil servants are likely to be brought in to cover Border Force staff while armed forces will also be deployed to hospital trusts ahead of the ambulance worker strike.