NSW Police detectives are appealing for the public’s assistance after three separate unit fires across Sydney on Monday resulted in the deaths of two people. The cause of all three fires is unknown at this stage and they are believed to be unrelated, police say.

The first fire occurred about 3am on Monday in Parramatta in Sydney’s west, where police arrived to find a third-floor unit engulfed in flames. 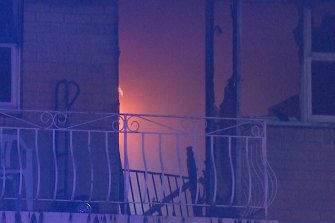 A 27-year-old died in hospital following a blaze in a unit in Parramatta.Credit:Nine News

The building on Campbell Street was evacuated and two men, aged 20 and 27, were taken to hospital. The 20-year-old was rescued from the third-flood balcony by firefighters, who used a ladder to rescue him

The older man died about 5am at Westmead hospital and the 20-year-old remains in a stable condition after being treated at the scene for smoke inhalation.

NSW Police superintendent Barry Vincent called for assistance from the public as investigators work to determine the cause of the fire.

“It’s a tragic outcome; anyone who dies within their own homes, it is tragic,” he said at the scene. “We are just seeking the assistance of the public if anyone has information to contact us and let us know.” 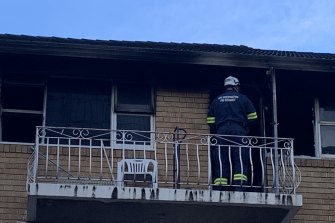 A 20-year-old man was rescued by firefighters from this third-story balcony.Credit:NSW Fire and Rescue

NSW Fire and Ambulance said there were no smoke alarms in the premises. The fatality sparked a safety blitz, with firefighters ensuring all buildings on the street were properly fitted with smoke alarms.

Just after 9.40am, emergency services were called to a unit block on Denison Road after reports of a fire. The body of a woman was found inside a unit.

“Officers from Inner West Police Area Command established a crime scene and have commenced an investigation into the circumstances surrounding the blaze,” a statement from police stated.

“As inquiries continue, police are appealing for anyone with information in relation to this incident to contact Crime Stoppers on 1800 333 000.”

The chaos continued on Monday morning with emergency services also called to a factory unit fire in Mt Druitt in Sydney’s west.

Crews arrived to smoke bellowing from cars and tyres with one patient transported to hospital for burns to their hands.