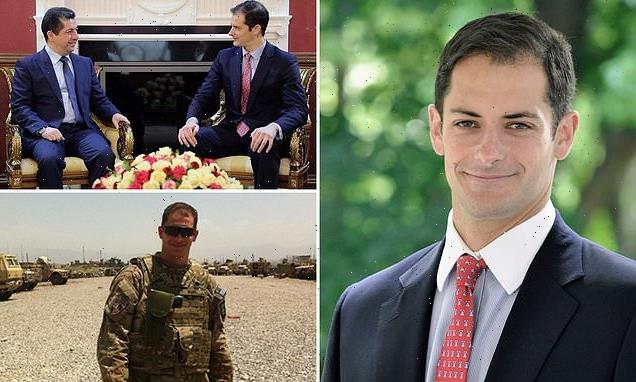 Trump's NSC Russia expert was 'under investigation for espionage'

EXCLUSIVE: Former National Security Council director under President Trump was investigated for ‘espionage’ before he joined the White House for ‘diverting official trips to unrelated destinations and buying Jewish girlfriend a swastika pendant’

A former senior director at the National Security Council was under an espionage-related investigation for months before he joined the White House, sources have told DailyMail.com.

Dr. Andrew Peek, NSC senior director for European and Russian affairs under President Trump, was marched out of the White House amid a reported ‘security investigation’ in January 2020.

The details of the spy probe have remained a mystery – until now.

Sources close to the investigation claimed his alleged suspicious activity that sparked the probe in 2019 included persuading a State Department staffer to forward him her high-ranking boss’s emails, diverting official trips to unrelated destinations in the Czech Republic and Qatar, and even buying a ‘swastika pendant’ for his then-girlfriend on one Doha trip. 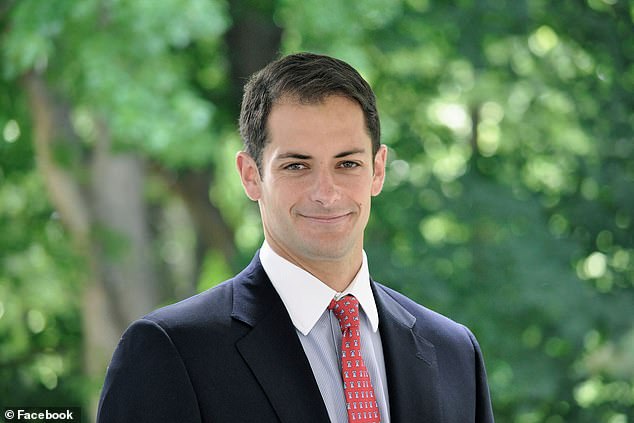 Dr. Andrew Peek, NSC senior director for European and Russian affairs under President Donald Trump, was escorted from the White House grounds in January 2020 amid a reported ‘security investigation 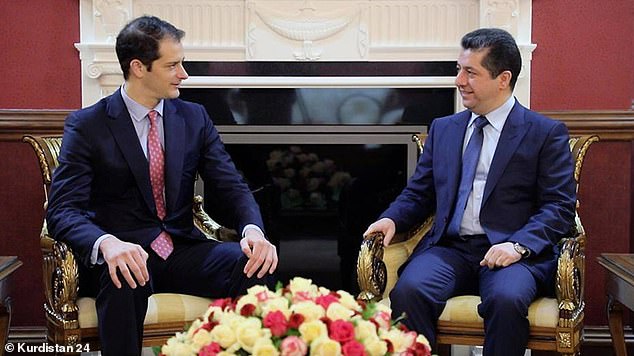 A spokesperson for Peek told DailyMail.com the claims were ‘false’ and ‘salacious mud-slinging’.

Peek was working for the State Department at the time of the October 2019 probe, when he was suddenly tapped by Donald Trump’s National Security Advisor (NSA) Robert O’Brien to join his White House team in a highly sensitive role: leading the Russia desk.

Two sources who were in senior positions in the State Department and White House at the time said O’Brien would have been briefed on the investigation by Diplomatic Security Services – but decided to hire Peek anyway.

They were surprised Peek was able to keep the top security clearances necessary to do his job despite being the target of an espionage-related probe.

‘There were incidents that began to arouse my suspicions,’ one former White House source close to the investigation told DailyMail.com.

‘His personal scheduler was one of the people who flagged to their boss that he was taking these extended trips.

‘Every place he spent a great deal of time was an absolute hive of either Iranian or Qatari officials.

‘There were women in the department that he’d sort of date. But it was more getting them to do things for him and provide information for him. 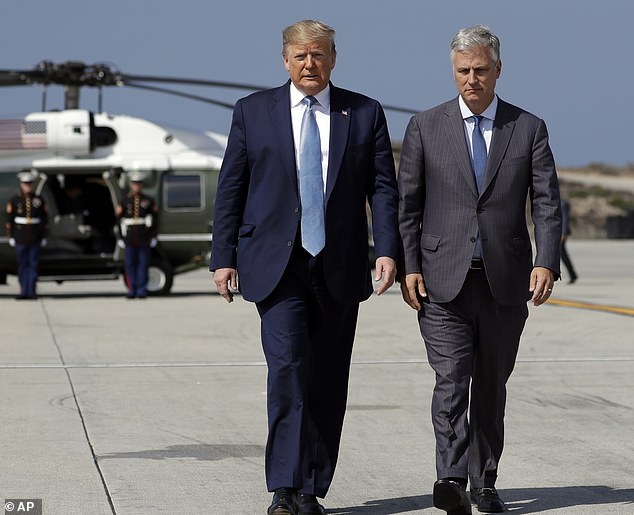 Trump’s National Security Advisor Robert O’Brien would have been briefed on the investigation into Peek by Diplomatic Security Services – but decided to hire him anyway, sources told DailyMail.com

‘He had a girl in that office who had access to all of her boss’s [David Hale] emails and she often sent them to Andrew. Their relationship was quite strange.

‘She was sending him these very sexual messages.’

The source said State Department security officials were particularly interested in one disturbing gift Peek allegedly gave one of his Jewish girlfriends – a swastika necklace – because it proved he had visited the Qatari capital Doha at a certain time relevant to their investigation.

‘When he came back from his trips he would always bring some kind of gift. It would frequently be from a particular market in Doha,’ the source said.

‘Towards the end of one particular relationship he gave the girl a necklace. It was a swastika. It’s not a normal item people sell at the airport, and it’s a very weird thing to give to a Jewish girlfriend.

A White House source said security officials were interested in the necklace because it was allegedly evidence of Peek having been in Doha at a specific period of time. 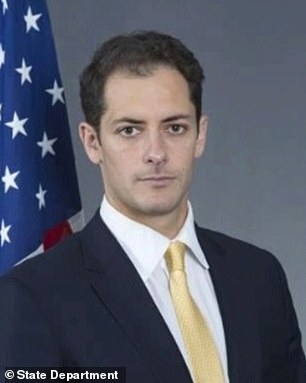 However, a source close to Peek who was also briefed on the investigation told DailyMail.com the Trump staffer never bought a swastika necklace, and denied that he had inappropriately obtained others’ emails.

Peek’s ex-girlfriend, who allegedly received the necklace, declined to comment.

The source close to Peek said he took commercial flights to Baghdad for his job that had layovers in Doha, and that all his official travel was approved by the State Department.

Sources said security officials also interviewed witnesses about Peek’s alleged trips to Prague, and his relationship with a Czech model.

One source with direct knowledge of the relationship who was interviewed by investigators said that Peek’s conversations with the model were mainly about foreign policy and national security issues.

‘He had a ton of different apps for communicating with people overseas, two different WhatsApp accounts, and there was constant communication with this girl in the Czech Republic,’ the source said.

‘So he had this hot Czech supermodel girlfriend who happened to be really interested in foreign policy.

The source close to Peek said all the claims against him had been fully investigated by law enforcement, and said that Department of Justice officials had told Peek’s lawyers they were declining to prosecute.

The State Department did not respond to a request for comment from DailyMail.com.

A spokesperson for Peek also claimed the espionage-related probe was dropped.

‘Dr. Andrew Peek has served his country honorably in military service in Afghanistan, at the White House, State Department, and as foreign policy advisor to U.S. senators,’ the spokesperson said.

‘The Daily Mail’s reporting is based on salacious mud-slinging and has dredged up false allegations, which were investigated years ago and have not been pursued.’ 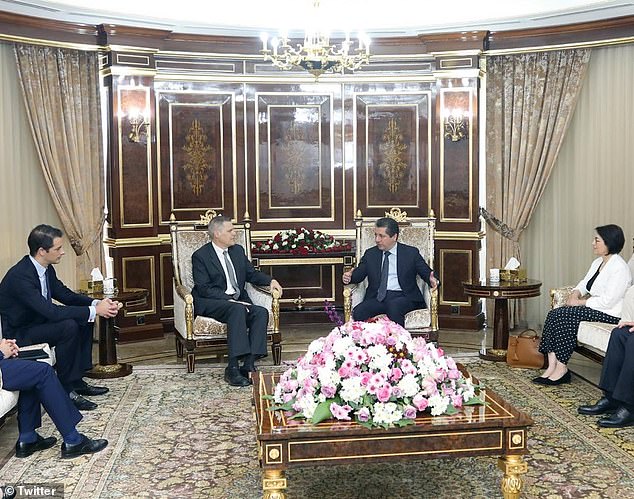 Before his NSC job, Peek’s expertise was in Iran and Iraq at the State Department. He is pictured far left during a meeting with the Prime Minister of the Kurdistan Region of Iraq Masrour Barzani 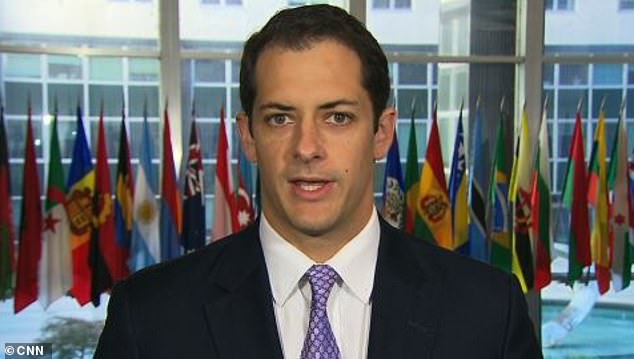 A source close to Peek said all the claims against him had been fully investigated by law enforcement, and said that Department of Justice officials had told Peek’s lawyers they were declining to prosecute

A Trump White House official with knowledge of the Peek probe said O’Brien would have been briefed on the investigation.

‘There is no way that Robert O’Brien would not have known there was a Diplomatic Security investigation into Peek,’ the official said.

‘There’s no question they were investigating him while he was at State.

‘To this day I don’t understand why O’Brien posted him at the Russia desk. You can argue it was one of the most sensitive international jobs they have. And they gave it to Peek, who essentially was a nobody.’

O’Brien did not respond to a request for comment.

Before his NSC job, Peek’s expertise was in Iran and Iraq at the State Department.

He graduated from Princeton in 2003 then Harvard Kennedy School in 2005, and worked as national security and foreign affairs advisor to Republican senators Gordon Smith and Mike Johanns, helping craft an Iran sanctions bill.

He served as a US Army intelligence officer, where family friend General David Petraeus personally requested Peek for his Commanders’ Initiatives Group in Afghanistan.

Naval War College International Relations and National Security Professor David Burbach wrote on Twitter when Peek’s NSC move was announced in October 2019 that his CV was ‘not the resume you’d usually expect for Senior Director for Russia’.

When the story broke in January 2020 that he had been put on leave in a security investigation and escorted out of the White House, rumors began swirling that he had been involved in a foreign spy ‘honey trap’.

Intelligence community newsletter editor and former Washington Post reporter Jeff Stein tweeted on January 19, 2020: ‘Rumor inside NSC is that Peek ‘had relations with Russian hookers and could not locate his government cell phone,’ insider source tells me.’

The rumors were also spread by DC think-tank staff with links to Iran, and used to criticize the Trump administration.

Reza Marashi, research director for the Iran regime-linked National Iranian American Council, wrote: ‘One of Trump’s top Iran advisors got suckered into a honey trap, had their laptop/iPhone stolen and hacked before they woke up, and the White House refused to take precautionary measures regarding their security clearance. Ladies and gents, I give you the Trump administration.’

But ex-White House sources close to the investigation said the probe had nothing to do with Russia – or Russian prostitutes.

‘He spent such little time in that position,’ one said. ‘I don’t think there was anything to do with Russia,’ said another. 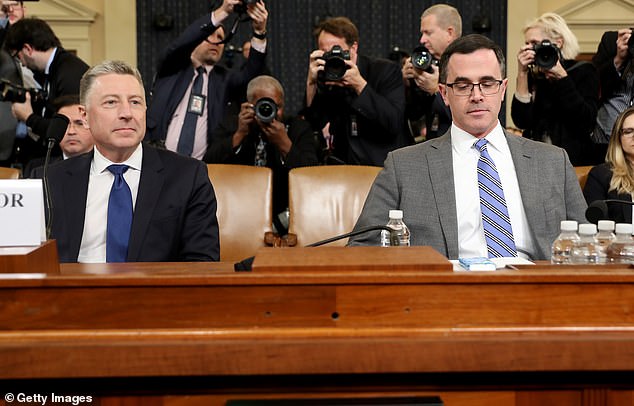 Peek replaced Tim Morrison (right), who left the position after testifying in the House impeachment inquiry 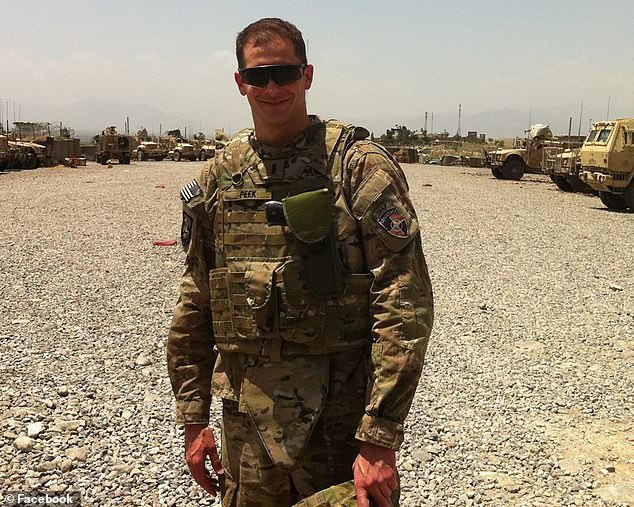 Peek served as a U.S. Army intelligence officer who worked under General John Allen in Afghanistan

The former Director of National Intelligence, Richard Grenell, also dismissed any of Peek’s rumored Russian espionage links in a statement to DailyMail.com.

‘I have seen firsthand how phony Russian collusion narratives have ruined people’s reputations with false and exaggerated allegations. It happened to many Republicans and it happened to Andrew. I look forward to serving with him in government again,’ Grenell said.

Sources did, however, highlight Peek’s indirect ties to Qatar.

‘He had a relationship with Doha during the administration,’ said one of Peek’s former close associates.

‘There would be a constant back and forth. He would brag about knowing a lot of officials there and had a great deal of trips there.’

Sources said he was close with his boss O’Brien, who developed business contacts with the Gulf state when he left government.

‘They were almost always on the same trip, even if it had absolutely nothing to do with Andrew’s portfolio,’ an ex-State Department source said. ‘He would brag about it, saying he’s his favorite buddy so he gets to go on all these trips.’

The source close to Peek said that ‘he wouldn’t be doing his job right’ if he didn’t have relationships with Qatari officials, as well as Saudi, Yemeni, Iraqi and others – and added that invitations by the NSA on foreign trips was a mark of how trusted Peek was by senior administration officials.

A former colleague, Ester Kurz, who was Director of Legislative Policy and Strategy at the American Israel Public Affairs Committee, called Peek a ‘patriot’.

‘I have known and worked with Andrew for close to 15 years and always found him to be a professional of the highest integrity and a patriot,’ Kurz said.

O’Brien also founded law firm Larson LLP, which was hired in 2021 to represent a Qatari travel company Mosafer in its lawsuit against Elliott Broidy, an outspoken Qatar critic and top Republican donor.

Broidy claimed in legal filings that Mosafer was a front for the Qatari government, which the firm denied.

In his final days as NSA, O’Brien gave the Qatari ambassador the Department of Defense Medal for Distinguished Public Service, the highest award given by the US to its officials and allies.

Peek’s former boss, General Allen, was accused by the Justice Department of secretly lobbying for Qatar and lying about it to federal agents, though was not charged with a crime.

An FBI warrant claimed he flew to Doha in June 2017 to advise them on how to win favor in Washington and told them to pursue a ‘full spectrum of info ops — black to white’.

His spokesman said he ‘has never acted as an agent of the Qatari government’ and ‘never had an agreement (written or oral) with Qatar or any other Qatar-related individual or entity.’