‘Treasured’ AIDS memorial quilt to be listed by Heritage Victoria

Every time Cheryl Olver sees a tall man with dark hair, for a second, she hopes it’s her son.

Daren died 28 years ago from an infection after contracting the AIDS virus. The last thing he did before he died, aged 29, was lift his mother’s hand with his frail palm and kiss it before murmuring “love you”.

It was 1994, when the virus was ripping through Australian’s gay community, killing 10,000 men at the end of last century. 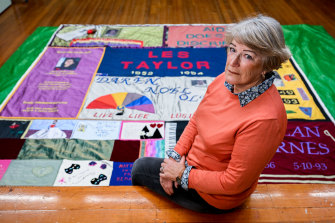 Cheryl Olver in front of the quilt panel she lovingly made for her son Daren after he died from an AIDS-related illness in 1994.Credit:Joe Armao

To bring attention to their deaths, and keep their memories alive, their loved ones, friends and carers began stitching quilt panels – that would later be joined to form large memorial quilts – in their honour, following a worldwide movement that started in San Francisco.

Now, Heritage Victoria has formally recognised and protected an AIDS memorial quilt that features a patch honouring Daren, placing it on the heritage register.

“He was the love of my life; it was just a given that we would do a quilt,” Cheryl says. “[But] my son probably lost 50 friends, and I could guarantee [that for] half of them, their parents either rejected them or they didn’t know. Everybody lied, everybody.” 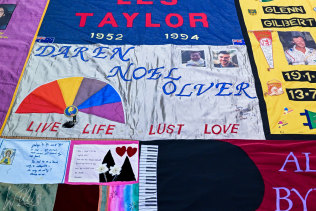 Daren Olver’s panel features a globe, symbolising his love of travel, and the colours of the gay flag.Credit:Joe Armao

Each of the quilt’s 209 panels represents a Victorian who died from an AIDS-related illness.

“It’s going to be treasured, as we treasured him.”

“[Daren] would be over the moon about the way things have gone in the gay world,” Cheryl says.

“We are so relieved that it’s not going to be screwed up in a ball and chucked in some storeroom to grow mouldy. It’s going to be treasured, as we treasured him.”

Each year the quilt has been put on display at Thorne Harbour Health, formally the Victorian AIDS Council, in South Yarra for World AIDS Day. 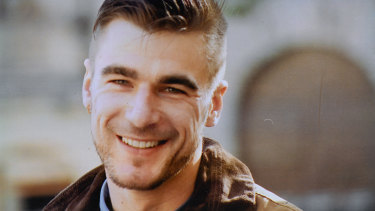 Daren Olver was a psych nurse, who loved people and volunteered for the mentally disabled and elderly.

Thorne Harbour chief executive Simon Ruth says some of the early activists who founded the organisation, including Les Taylor whose panel sits above Daren’s, are honoured on the quilt.

“It’s an important piece of community history,” he says. “If we look back to the 80s and 90s when the quilts were made, a lot of people were rejected by their families. People didn’t talk publicly about how their loved one died. The quilts were a way to grieve openly.”

Professor Philip Goad, chair of the Heritage Council of Victoria, said it was important to memorialise AIDS deaths like those from other causes, such as war.

“Many of us have lost friends,” he says. “The quilt stands in for not just the 209 [names on the quilt], but the huge number of people who died [from AIDS-related illnesses] in Victoria since the mid to late 80s.” 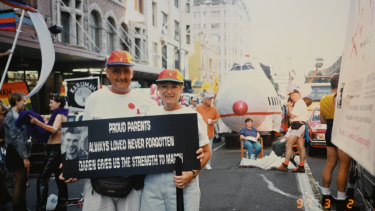 Cheryl and Alby Olver at a Mardi Gras after their son’s death.

Each handmade panel includes objects and symbols – silk, satin, denim, sequins, metal badges, shoes, and feathers – to represent the personalities of those who died.

John Hall has worked at Thorne Harbour since 1988 and sewed a panel featuring a teddy bear for one man he cared for, who kept a large collection of the cuddly toys, and a clown for another man who was a nightclub performer.

Daren’s panel includes a globe, symbolising his love of travel, the colours of the gay flag, a photo from when he was aged one and another when he was 28, and his motto “live, life, lust, love”.

Cheryl, who later went to nine Mardi Gras parades with Daren’s father, Alby, in their son’s honour, says some panels don’t include a family name.