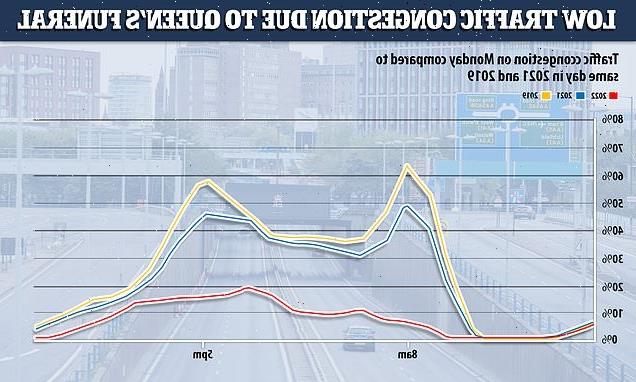 Traffic nearly halved on Monday due to Queen's funeral

The amount of traffic on UK roads nearly halved on Monday as drivers stayed home on the day of the Queen’s funeral, new data shows.

The number of journeys taken by UK drivers fell to its lowest point since early February 2021, before lockdown was lifted.

The data, from the Department of Transport, showed that traffic was at 54 per cent of its pre-pandemic levels.

It was a massive fall from a week earlier when traffic was at 99 per cent of its pre-pandemic levels.

The drop of 45 percentage points is by far the biggest week-on-week drop for any bank holiday so far this year. 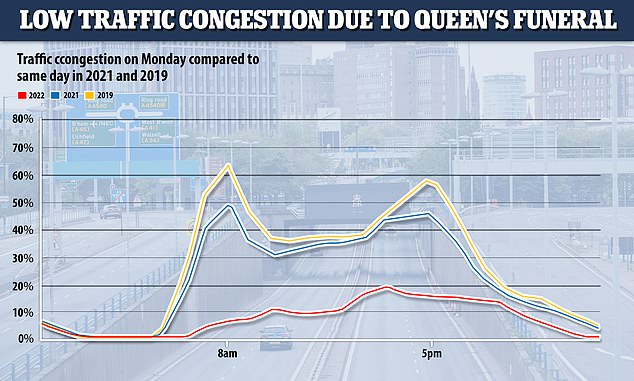 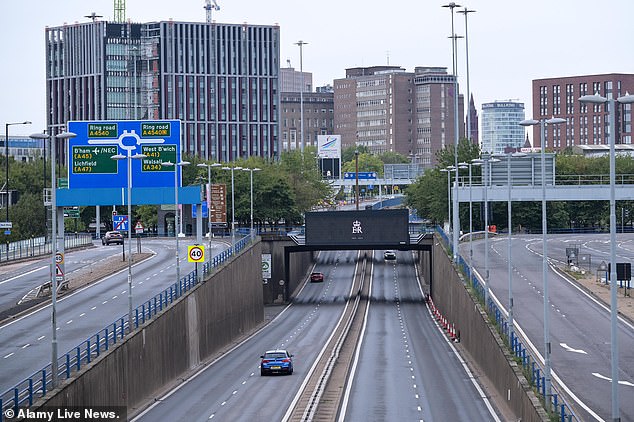 A usually packed contraflow system on Birmingham’s Aston Expressway from the Spaghetti Junction into the city is almost void of vehicles as people stay at home to watch the state funeral of The Queen. The amount of traffic on UK roads nearly halved on Monday as drivers stayed home on the day of the Queen’s funeral, new data shows

Travel during the Platinum Jubilee fell by 27 percentage points compared with the week earlier, to 75 per cent of pre-Covid levels.

Across all bank holidays so far this year, the average drop in traffic has been 16 percentage points, analysis of the data by the PA news agency shows.

Millions of Britons were glued to their TV screens for the funeral on Monday, with around 95 per cent of switched-on TVs tuned to one of the dozens of channels showing the event.

An average of 26.2 million people watched it, according to research organisation Barb, which is a little fewer than the 32 million who tuned into the funeral service for Diana, Princess of Wales, in September 1997.

Monday was a bank holiday, so commuters will have stayed at home. Meanwhile, many businesses – including restaurants and pubs – were closed for the day, so there were even fewer reasons to travel.

The Office for National Statistics (ONS) said: ‘Road traffic on 19 September 2022 was down 45 percentage points from the previous Monday, this large week-on-week fall in road traffic was driven by falls in activity owing to the bank holiday for the State Funeral of Her Majesty Queen Elizabeth.’

Traffic hit a low of 23 per cent of pre-pandemic levels in the middle of April 2020.