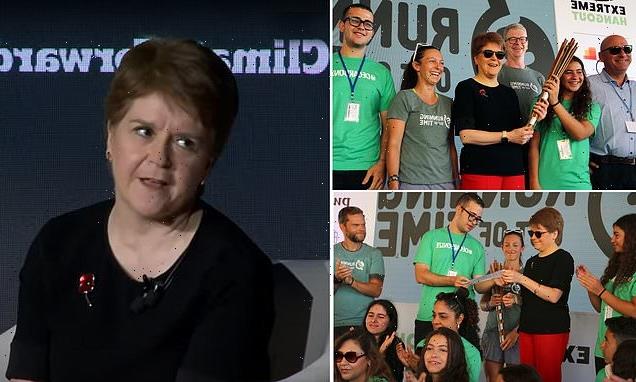 Nicola Sturgeon today announced an extra £5million in ‘loss and damage’ cash for climate-hit communites as she ramped up the pressure in a row over ‘reparations’ payments.

The Scottish First Minister, who is attending the Cop-27 climate summit in Egypt, pledged the money to send an ‘important message’ to rich nations about providing compensation to developing countries.

The issue of ‘loss and damage’ is the idea that worst-affected nations are given money to pay for costs already being incurred from climate-fuelled weather extremes or impacts, like rising sea levels.

There are calls for richer nations to acknowledge their role in climate change due to the fact they industrialised their economies before other parts of the world.

The topic ‘loss and damage’ has been included on the Cop agenda for the first time this year at the Sharm El-Sheikh summit on the Red Sea.

But it is proving contentious with a growing backlash at the prospect of UK taxpayers’ cash being used to fund climate ‘reparations’.

He added Britain’s ‘leadership of the industrial revolution brought prosperity to the world and led to increased life expectancy and better living conditions’.

Nicola Sturgeon, speaking at a Cop-27 panel event, despaired at how developing nations felt they had to ‘come and plead’ with bigger economies over the issue of ‘loss and damage’ 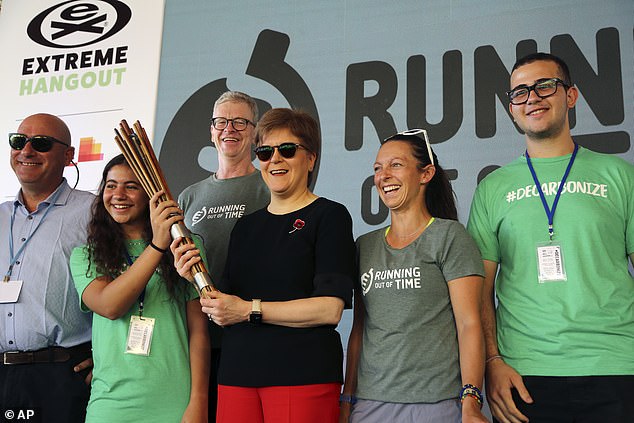 The Scottish First Minister, pitctured at the finish line of the ‘Running Out Of Time’ climate relay, today announced an extra £5m in ‘loss and damage’ cash for climate-hit communites 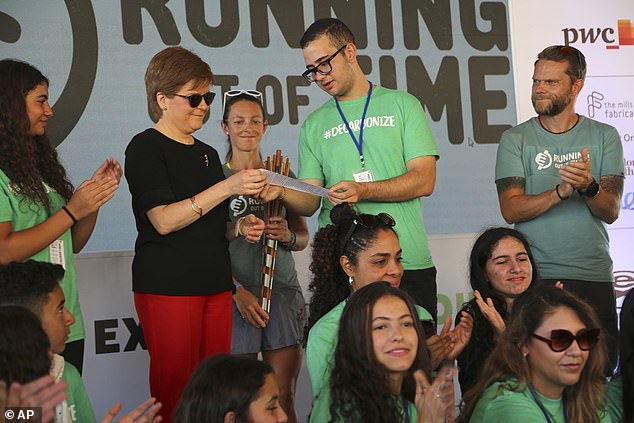 Yesterday at Cop 27 the Alliance of Small Island States called for a new loss and damage response fund that is operational by 2024, as well as for emissions to peak and decline immediately and reform of the financial system away from fossil fuels.

The group of nations, whose very existence is threatened by the rising seas and increasingly stormy weather caused by climate change, said the fossil fuel industry had been raking in three billion US dollars a day for 30 years.

‘It is still cheaper, and faster, to get money to destroy the planet than to save it,’ they said.

The extra £5million in funding announced by Ms Sturgeon today has increased the Scottish Government’s commitment to ‘loss and damage’ payments to £7million.

‘The funding Scotland has announced today is a small sum in terms of the overall scale of the loss and damage that developing countries face, but I hope that it sends an important message,’ the SNP leader said.

Ms Sturgeon spoke at a panel event at the Cop-27 summit this morning during which she claimed there was ‘bordering on justifiable anger’ among some at the Egypt gathering at slow progress on climate issues.

‘It’s really, really important that we don’t allow optimism to be blind faith, because we’re nowhere near where we should be right now,’ she told the event hosted by the New York Times.

The First Minister also despaired at how developing nations felt they had to ‘come and plead’ with bigger economies ‘to acknowledge, let alone address’ the issue of ‘loss and damage’.

‘There is a real need to make tangible progress, to have real accountability – obviously for the achievement of what we all need to achieve, but along the way to retain a sense of trust and faith in the process,’ she said.

‘I think that trust and faith is what is on the line here in Egypt over the next couple of weeks.

‘We’re not going to achieve everything that people want to achieve here, but – whether it’s on loss and damage or commitments around emissions reductions – there must be a tangible sense of progress and not allow other big important issues to divert attention.’