Home » World News » Spotting a Manolo from a no-no: the case of the alleged counterfeit heels

A Sydney retailer has been ordered to hand over photos and other records of shoes it sold bearing the Manolo Blahnik trademark, as the company behind the famed stiletto-maker seeks to stamp out allegedly counterfeit heels.

London-based Manolo Blahnik Worldwide launched preliminary proceedings in the Federal Court on May 29 against Estro Concept Pty Limited, which operates designer outlets online and in Sydney, including the CBD and Drummoyne. 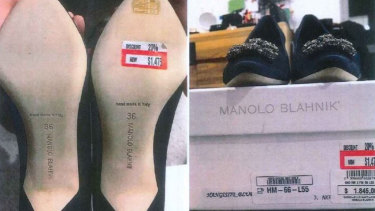 The shoemaker, whose high-end heels shot to mainstream prominence in the HBO series Sex And The City, sought a court order to force Estro to hand over company records to shed light on whether it had engaged in trademark infringement, misleading or deceptive conduct and passing off.

Manolo Blahnik said the records would help it decide whether to take further court action.

The shoemaker was alerted to the potentially counterfeit heels after a customer of Estro's Drummoyne outlet emailed Manolo Blahnik's customer services team in July 2019 after paying $1,051.65 for a pair of pumps.

The customer said "the bottom of the heels look kind of weird" with mismatched soles, and asked if they were genuine Manolos.

Manolo Blahnik senior legal counsel Jack Randles, based in London, subsequently emailed the customer and asked if she would be free "to discuss a proposal". He said it was important the customer did not alert Estro, so that his team could "investigate this quietly and take action without drawing any suspicion or alerting Estro/others".

But the customer replied that she had since asked "some professional people" and believed her shoes were genuine. 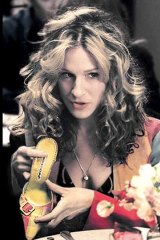 Sarah Jessica Parker as Carrie Bradshaw holding a Manolo Blahnik shoe in an episode of Sex and the City.

Manolo Blahnik's lawyers told the court Mr Randles inspected the customer's photo of the pumps and believed they were not genuine based on aspects of the quality and finish, including the mismatched soles. Genuine Manolos also had small dots on the soles, the court heard, with the number of dots varying depending on the style.

The court heard Mr Randles purchased another pair of Manolo-branded heels from Estro online and again formed the view they were not genuine.

Manolo Blahnik's lawyers wrote to Estro in September 2019 and said their client believed the heels were "counterfeit goods" because they lacked "highly confidential, specific indicators of authenticity".

They sought further information from Estro, which was not provided. The court heard the shoemaker believed it may have a case against Estro but sought more details to help determine if the retailer had a defence or if any of the shoes were "grey market goods" bought from an authorised retailer and re-sold.

Justice Brigitte Markovic ordered Estro to hand over documents showing the quantity, style and price of goods it received from its supplier and sold to customers, including photographs and other records.

"Manolo Blahnik has taken steps over a relatively lengthy period to obtain voluntarily the information it now seeks by way of this application," Justice Markovic said.

"While some information was provided … that information is not sufficient to enable it to make a decision about whether to commence a proceeding."