Shocking photos of family’s three-bed home with mushrooms and SEWAGE seeping through walls: Mother and her children are forced to live in mould-infested Islington Council house for a year – as Gove launches crackdown in wake of Awaab Ishak death

Shocking pictures show the appalling state of a family’s home in London which is covered in black mould and has mushrooms growing out of the walls and ceilings where sewage has leaked through.

The heartbreaking footage comes just a week after a landmark ruling concluded two-year-old Awaab Ishak died after prolonged exposure to mould – three years after his parents had complained about the damp in their one-bedroom housing association flat in Rochdale.

Kwajo Tweneboa, who shared the videos today, claimed this family is going through a ‘similar’ experience and implored Islington Council to do something to address the situation, which he said was raised with them last December.

He said many of the family’s belongings have been destroyed due to ongoing leaks and black mould in the bedrooms, while all remaining items have been stacked in the front room for the last year.

The mother reportedly has to sleep on the sofa in the front room due to the disgusting mould and peeling ceilings in two of the three bedrooms. 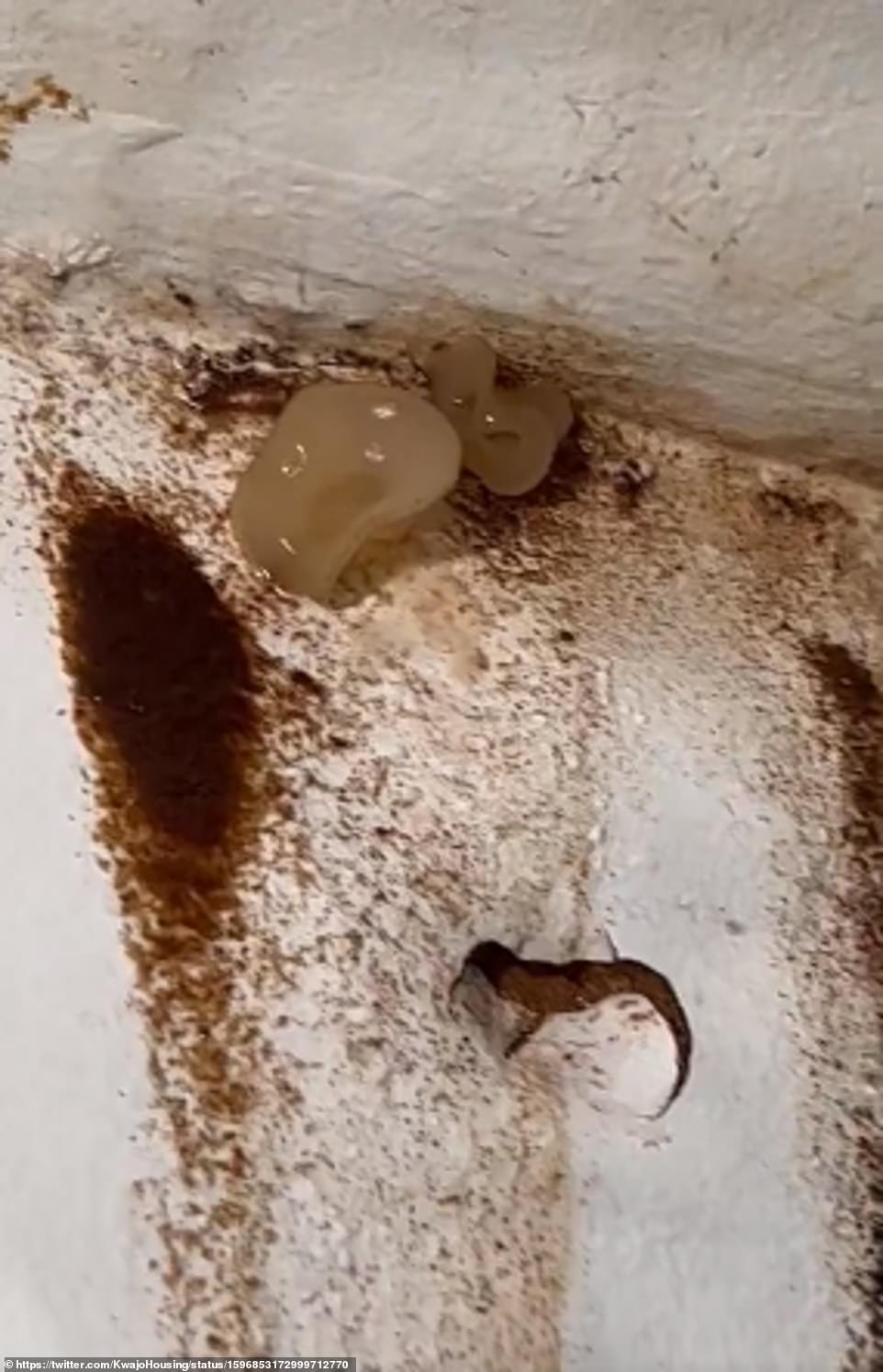 Mr Tweneboa continued: ‘Mushrooms now grow from the bacteria where sewage has seeped through the walls and ceilings in the bedroom.

‘The walls of the second bedroom is covered in black mould. In another corner the mould was light and growing fur, indicating two different types of mould in the same bedroom.

‘The tenants have been paying rent for a three bed property. They haven’t had two of the bedrooms for a year.

‘They’ve had to resort to using foil and tape to try and keep mice out of the property. All these issues they’ve reported.

‘They said communication from Islington Council has been beyond a disgrace.

‘Workmen and ‘surveyors’ have seen it but nothing ever done to fix it.’ 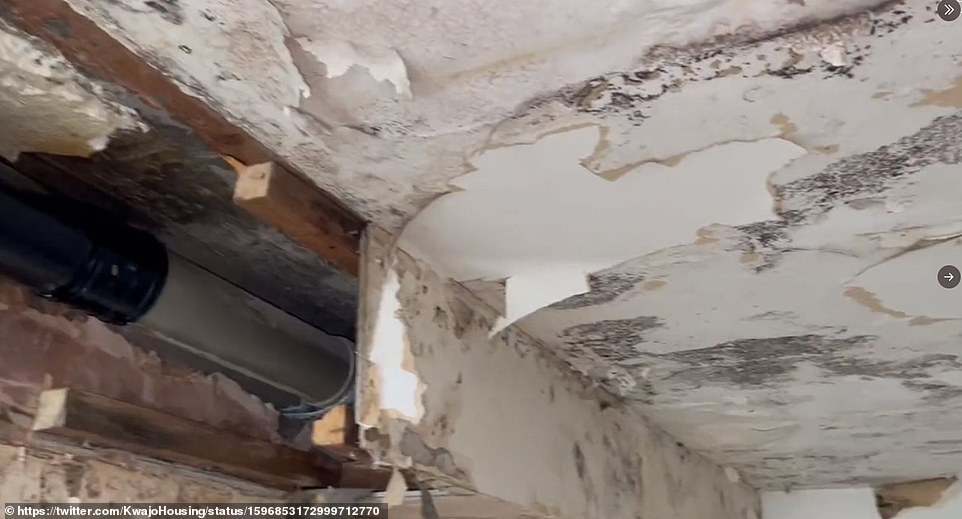 Kwajo Tweneboa, who shared the videos today, implored Islington Council to do something to address the situation 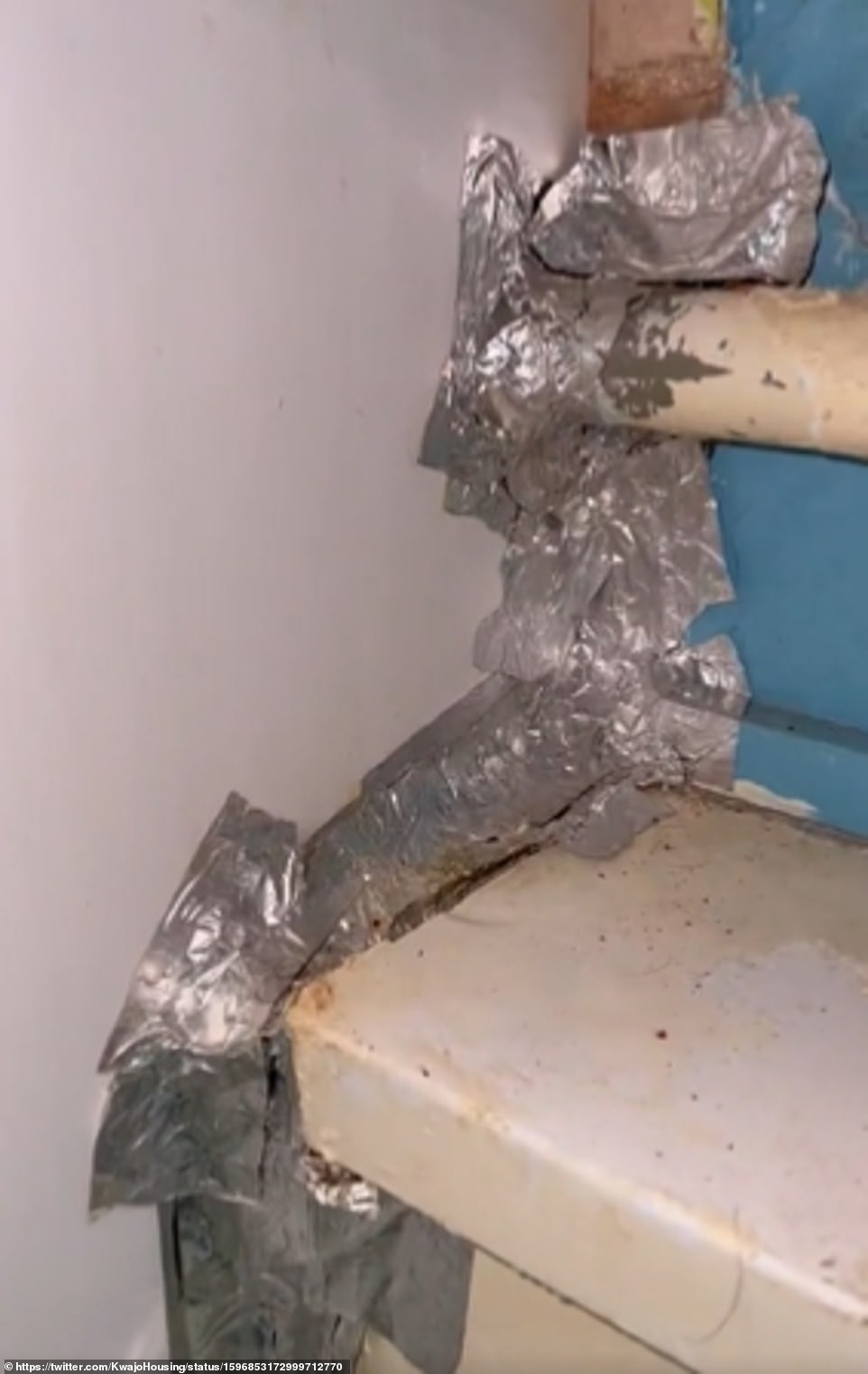 Islington Council responded to the videos: ‘Thanks for highlighting this. These images are extremely concerning. We are urgently looking into this and have DMd you for more details.’

MailOnline has contacted the council and the area’s MP Emily Thornberry for comment.

This week Michael Gove stripped new funding from the housing organisation which owns the flat where Awaab Ishak died from prolonged exposure to mould in December 2020.

The toddler’s parents repeatedly begged housing officials and medical professionals to help, but no action was taken to treat and prevent the mould – leaving Awaab with ‘prolonged’ and ‘chronic’ exposure to the substance – due to a communication breakdown, the inquest into his death heard.

The Government on Thursday said Rochdale Boroughwide Housing (RBH), which owned the flat, will not be given its expected £1 million funding from the Affordable Homes Programme (AHP) or receive any new AHP contracts for new homes, until the Regulator of Social Housing has finished its investigation and RBH can prove it is a responsible landlord.

Levelling Up and Housing Secretary Mr Gove said he feared tens of thousands of British homes were unsafe because they are not being properly maintained.

Mr Gove said in a statement: ‘RBH failed its tenants so it will not receive a penny of additional taxpayers’ money for new housing until it gets its act together and does right by tenants.

‘Let this be a warning to other housing providers who are ignoring complaints and failing in their obligations to tenants. We will not hesitate to act.

‘Everyone deserves the right to live in safe, decent home and this Government will always act to protect tenants.’

The Government will continue to monitor housing standards of RBH tenancies closely, working with the regulator and ombudsman, to ensure that tenants have appropriate housing, the statement added.

Speaking on BBC Breakfast, Mr Gove added: ‘I fear it’s the case that there are tens of thousands of properties that are not in the state that they should be.’

As part of a wider crackdown on poor standards, Mr Gove will block any housing provider that breaches the regulator’s consumer standards from new AHP funding until they make improvements.

He will also consider stripping providers of existing AHP funding, unless construction has already started on site, his statement added.

On Saturday, Gareth Swarbrick was removed as chief executive of RBH.

Awaab’s parents, originally from Sudan, had repeatedly complained about the mould. They also believed their treatment was shaped by them not being from the UK.

In a statement on Tuesday, RBH said: ‘We did make assumptions about lifestyle and we accept that we got that wrong.

‘We abhor racism in any shape or form and we know that we have a responsibility to all our communities.’